Kanal İstanbul project may increase destruction during an earthquake – CİHAN

Kanal İstanbul project may increase destruction during an earthquake

Kanal İstanbul, a new waterway announced by Prime Minister Recep Tayyip Erdoğan as his ?crazy project? which is planned to span 44 kilometers and connect the Black Sea to the Sea of Marmara, carries plenty of risks, according to experts, who point out that İstanbul lies on a seismic belt and that the proposed waterway may lead to more destruction during a possible earthquake.

The waterway project, which will start in Yeniköy in the north and end at Lake Küçükçekmece in the south, was discussed during a panel session held at İstanbul Bilgi University called ?Hukuki, Ekolojik, Kentsel Yönleriyle Kanal İstanbul? (Kanal İstanbul from a legal, ecological and urban perspective). Experts basically criticized the project for the possible risks it can lead to. Some even suggested that implementing the project could be the ?end of İstanbul?.

Istanbul, Tunceli, Bolu, Düzce and Eskişehir are Turkey?s leading cities in maintaining social gender equality, according to a report

Airliners.net Civil Aviation Topics – Some of his grandest construction projects, like a third airport forIstanbul that officials have said would be the world’s largest, are in jeopardy. 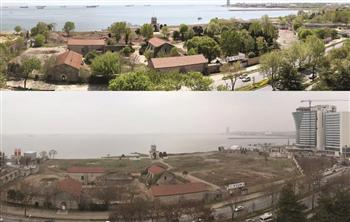 www.worldbulletin.net – Organised by the Istanbul Foundation for Culture and Arts (IKSV) and sponsored by Akbank, the festival will be held between April 5-20, 2014. The full

Witt Magazine (Erlend Geerts) – Here is my top 15 things to do in Istanbul list. I chose these not because they are popular, but because I think they are worth seeing or experiencing

www.worldbulletin.net – Cuneyt Asan, who introduced the steak house concept to Turkey and owns several steak houses in Istanbul, insists that the kebab is an irreplaceabl

New York Times – On a windswept afternoon in mid-December, the writer Orhan Pamuk stood in a leafy square around the corner fromIstanbul University, absorbed in a

The Quote of the week: ?Citizenship, minorities and the struggle for a right to the city in Istanbul? by Gülçin Erdi Lelandais

This article has sought to analyze how the symbolic change of a living space may encourage the identity claims of minorities,

particularly regarding their relationship with public authorities, with each side perceiving this space according to its own logic. The inhabitants apprehend, represent and project themselves in their daily environment, which is focused on the neighborhood; in return, this living space confers significance on their behavior (Moser and Weiss 2003). The neighborhood assigns, first and foremost, a sense of identity, by locating the individual socially, economically and culturally.

Legal Battle of Greeks in Istanbul