The project of a banking union is taking shape. The EU finance ministers agreed on Tuesday night on a plan for closing down insolvent banks. A single resolution fund is to gradually replace national provisions over the next ten years. Berlin has once again got its way with this “banking union light”, some commentators grumble. Others express relief that one of the major problems of the crisis has been solved. 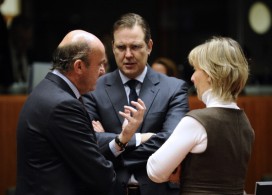 Sweden’s Borg, centre, during last night’s meeting, where he sparred with his Dutch counterpart

It?s become something of a routine in the EU?s ongoing effort to build a ?banking union? that finance ministers try to come to a deal at their normal Brussels meetings ? only to fail and call a special emergency session at the 11thhour before a crucial summit.

US, EU chide Ukraine after police action against protesters

Brussels closer to agreeing new system to avoid repetition of the eurozone crisis, seen as biggest shift in sovereignty since the creation of the euro

Security forces stormed the headquarters of Yulia Tymoshenko’s Fatherland Party in Kievon Monday. At the same time President Viktor Yanukovych and opposition politician Vitali Klitschko have signalled their willingness to commence a dialogue. EU foreign policy chief Catherine Ashton is due to arrive in the country on Tuesday to act as mediator. Commentators fear that the situation will nonetheless escalate and warn against putting too much hope in boxing champion Klitschko.

The European Union should stop funding Palestinian civil servants in the Gaza Strip because money is going to officials who do not work, European auditors said on Wednesday (11 December).

As the biggest aid donor to the Palestinian territories, EU taxpayers pay a fifth of the salaries of teachers, doctors and bureaucrats in the small coastal territory, which has been governed by the Islamist group Hamas since 2007.