EU will likely lift some Iran sanctions in December: France

The US, Russia, China, the UK, France and Germany reached a provisional agreement with Iran in the nuclear dispute on Sunday in Geneva. Iran will discontinue parts of its nuclear programmes for the next six months in return for sanctions against the country being eased. The deal could stabilise the Middle East in the long term, some commentators hope. Others see the concessions to Tehran as dangerous.

EU leaders across Europe welcomed the deal reached early Sunday (24 November) with Iran on curbing its nuclear programme and praised EU foreign affairs chief Catherine Ashton for her role in brokering the agreement.

Iran and six world powers agreed to curb the Iranian nuclear programme in exchange for initial sanctions relief, signalling the start of a rapprochement that could reduce tension in the wider Middle East

Top News: The U.S., Iran, and five other world powers signed an agreement early Sunday morning in Geneva that would temporarily halt progress on Iran’s nuclear program and lead to an easing of economic sanctions. Under the accord, Iran will not install any new centrifuges, start any that aren’t already operating, or build new enrichment facilities for six months, though it can continue enriching uranium to 3.5 percent. In exchange, the U.S. will provide up to $7 billion in sanction relief. Negotiations for a more permanent agreement will follow.

A quick reconnaissance over German politics

So you might think this blog ought to have written much, much more about the German elections and the coalition process that came after. Mea culpa, but the truth is that it just wasn?t interesting or new and the reasons are well defined here, with the notion of the post-political situation. Germany had an election as post-political as anything you might get in Italy. The biggest row was about the idea of having a compulsory vegetarian day in schools. The opening of talks between the parties is well satirised here as a vacuous media pseudo-event.

More than ever, the EU must prepare itself for refusals to vote and protest votes during the upcoming European elections. Only a correction of course, initiated by the grand coalition in Germany, can prevent the progression of EU-sceptics and populists, writes Dieter Spöri.

Dieter Spöri was a member of the SPD-faction in the German Bundestag and served as finance expert in the party for many years. He is honorary president of the European Movement Germany.

Half a year before the next European elections in May 2014, the EU seems to be sinking deeper and deeper into a democratic crisis. The member states of the EU, particularly those in the euro zone, continue to drift further apart on economic and financial matters. As a result, the political and emotional gap between the countries also continues to grow.

France?s Got Talent. So has Ukraine.

Why national symbols have a bright future ahead of them. Even more so today than thirty or forty years ago.

France-Ukraine on Tuesday. Ukraine-EU on Sunday.

Sweden is offering Syrian asylum seekers permanent residence, a status equal to any other Swedish resident. 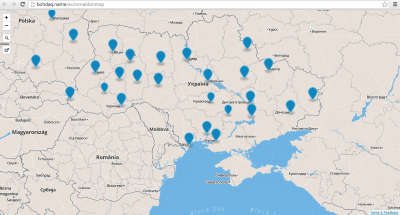 A Lviv-based Facebook user, Bogdan Tsap, has set up an interactive map of pro-EU Association Agreement protests in Ukraine. On his Facebook wall, Bogdan described [uk] his creation:

Huge demonstration in Kyiv in support of EU pact

Tens of thousands of Ukrainians bearing EU flags and chanting “Down with the gang!” marched through Kyiv yesterday (24 November) in a pro-Europe rally denouncing President Viktor Yanukovich‘s U-turn in the country’s European policy.

In the biggest street demonstrations in Kyiv since the Orange Revolution nine years ago, opposition leaders called on Yanukovich to go ahead with the signing of a landmark agreement with the European Union on 29 November in Vilnius as originally planned.

AEGEE stands with the pro-European Ukrainians

AEGEE-Europe, shocked by the very recent decision of the Ukrainian Government to suspend the process of preparation for signature of the Association Agreement and Deep and Comprehensive Free Trade Agreement between the EU and Ukraine at the EU-EaP Vilnius Summit, would like to present the following statement: