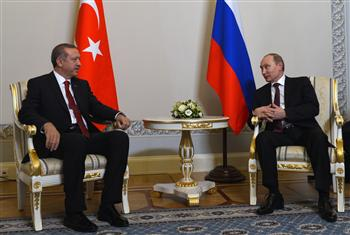 Turkish PM Erdoğan to Putin: Take us to Shanghai

Prime Minister Recep Tayyip Erdoğan has again opened up the debate on Turkey?s membership in the Shanghai Cooperation Organisation

Reuters (UK) Tuesday, November 19, 2013, Berlin The European Union may not be able to accept Turkey as a member, German parties negotiating a coalition government have said, while making clear the EU?s ?privileged relationship? with Ankara should be developed further. In a paper on foreign policy, Chancellor Angela Merkel?s conservatives and the center-left Social

Turkey has ‘nothing to learn’ from Greece on religious freedoms

With governments embroiled in uprisings, Kurds are beginning to benefit ? is autonomy in north-east Syria just the start?

The leading Syrian Kurdish rebel group has said it intends to form a government in Kurdish-dominated north-east Syria, where it has been operating as the de facto government since last year. This signals the emergence of another autonomous Kurdish region, following the autonomy that Iraq’s Kurds have enjoyed since the 1990s.

All right! It is a fact that Turkey?s East has been witnessing historic developments with Turkish Prime Minister

Accompanied by a large delegation composed of ministers, high-level bureaucrats and journalists

Damascus is ramping up its bombings and starving its people, the foreign minister said