The right-wing populists Marine Le Pen from France and Geert Wilders from the Netherlands announced on Wednesday in the Hague that they would forge an alliance and form a parliamentary group in the EU Parliament after the 2014 elections. Commentators warn against underestimating right-wing nationalists and advise politicians to take the wind from their sails with more engagement for the European project.

There is no evidence Spain broke EU law by imposing tight controls at its border with Gibraltar, the European Union executive said on Friday (15 November), urging both sides to act to ease bottlenecks that strained relations between London and Madrid.

The European Commission decided yesterday (13 November) to prepare an in-depth analysis of Germany’s persistently high current account surplus to find out if it is a sign of a serious imbalance in Europe’s biggest economy.

Germany has had a current account surplus in excess of 6% of its gross domestic product since 2007, meaning it exports far more than it imports from the rest of the world.

Some Swedish cinemas have launched a new movie rating to highlight gender bias and how women are portrayed, or not portrayed, in films.

Sweden, a country which has long been known for its progressive legislation on gender equality, is now broadening the debate beyond the political and social spheres, into the cultural sector, with the launch of a feminist movie rating in cinemas.

Ireland is to become the first crisis state to exit the European bailout programme and Spain too has announced it can get by without assistance for its banks in future. The Eurozone finance ministers gave both countries the green light in Brussels on Thursday. Some commentators believe these successes will confirm the proponents of austerity in their views. Others warn that the victims of the austerity policy must not be forgotten.

The radicalisation of Flemish nationalism

The polarising strategy of the Flemish movement?s biggest political party places next year?s ?mother of all elections? in Belgium on a knife-edge.

Eloise Todd is the Brussels director of ONE, an NGO co-founded by rock star Bono which seeks to end extreme poverty and preventable disease, particularly in Africa.

When someone says ?money laundering? to me, there is a certain image that comes to mind: a slick, ruthless operator working in the shadows, bullying, intimidating and playing the system. Think Tony Soprano or Tony Montana. But what if the system didn?t need to be played?

The eurozone economy all but stagnated in the third quarter with France’s recovery fizzling out and slower expansion in Germany, the latest growth data released today (14 November) showed.

Although the ?9.5 trillion economy pulled out of its longest recession in the previous quarter, record high unemployment, lack of consumer and market confidence continue to choke a more solid rebound.

U.S. and European Union flags wave as members of the EU Delegation arrive to attend the G8 Summit, May 18, 2012, at Dulles International Airport in Chantilly, Va. [AP File Photo]

In an unprecedented step, the European Commission is expected to take powerhouse Germany to task over its reliance on exports

Marine Le Pen, leader of the French party the Front national (FN), visited The Hague today (13 November) to meet with Dutch politician Geert Wilders, in an effort to build a powerful far-right political force during the 2014 EU elections.

Receiving Le Pen in The Hague, Wilders said that she was ?an important politician and a good friend?, reported the Dutch public broadcaster NOS. 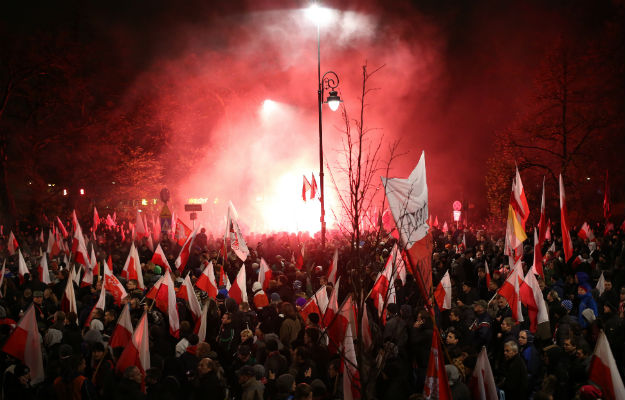 The EU member states plan to introduce a job guarantee for all unemployed youths within the next two years. This was agreed at a special meeting on youth unemployment attended by 24 heads of state and government in Paris on Tuesday. Commentators doubt such a programme can be financed, particularly in the crisis states, and argue that measures to boost the economy make more sense.

Have Racist Behaviors Been Unleashed in France ?

Epitomized by racial taunts [fr] towards the French Guiana-born Minister of Justice Christine Taubira on the cover of the weekly newspaper Minute, many observers bemoan the rise of racist behaviors [fr] in France. One of those observers is Harry Roselmack, a prominent reporter born in Martinique, who wrote an editorial in which he opines that the current atmosphere in France reduces his citizenship to the color of his skin [fr]:

Francesco Montenegro, the archbishop of the Sicilian archdiocese of Agrigento and Lampedusa, visited Brussels last week to urge EU representatives to boost their actions on asylum and migration and to ?put the human being first? in their policy initiatives.

The Lampedusa tragedy was a wake-up call for Europe, Montenegro said. The archbishop visited representatives of the EU Commission, Parliament and Council last week. He saw ?a willingness to change things,? he told EurActiv.

The Dutch are emerging as Europe’s thought leaders on reform

The Dutch are quickly becoming Europe’s thought leaders on EU reform. The Dutch government’s “subsidiarity review” contained numerous interesting ideas for EU reform, the Dutch lower house, Tweede Kamer recently published a paper outlining key proposals for how to strengthen the role of national parliaments. And today, the Dutch foreign minister, Frans Timmermans, used a piece in the FT to set out some new ideas for reform.

The European Commission sent inspectors to the British territory in September after Britain and Gibraltar complained to Brussels that Spain was applying over-zealous border controls, causing long lines for workers and tourists entering and leaving the rocky outcrop near the tip of southern Spain.