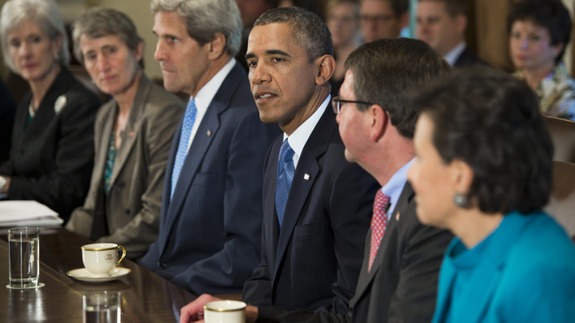 UPDATE: Just after 12 a.m. ET on Tuesday, the government shutdown became official, according to government officials and multiple news reports.

As Americans consider the ominous specter of a government shutdown, here, below, is a list of Twitter accounts that will keep you informed

Ten Questions About Obamacare You Were Too Embarrassed to Ask

1. I heard that Obamacare starts on Tuesday. What is Obamacare, anyway?

Federal agencies were directed to cut back services after lawmakers could not break a political stalemate that sparked new questions about the ability of a deeply divided Congress to perform its most basic functions.

The NSA isn?t the only US government agency making privacy obsolete

Increasingly, the relationship between Americans and their government has come to resemble a one-way mirror dividing an interrogation room. So here?s a beginner?s guide to some of what?s happening on the other side of that mirror.

A great deal of good can happen if military contractors and militarized communities move away from economic dependence on Cold War weapons systems and instead invest in new energy technology.

Creeping takeover has been textbook Trotsky, whose supporters advocated joining more moderate political parties to capture them for their own ends