?It was a distinctly neutral position from which we had our leverage,? says Professor Mehmet Ali Tugtan from Istanbul’s Bilgi University. Tugtan says Turkey was the one-stop shop for problem solving in the Middle East. ?The Israelis were coming to talk 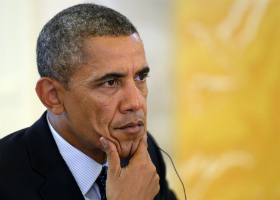 Top News: President Obama was met with askeptical crowd of world leaders as he made the case for military strikes in Syria at the meeting of the G20 yesterday in St. Petersburg, Russia. China and Russia issued sharp rebukes, with Russian President Vladimir Putin going so far to say that Secretary of State John Kerry deliberately misled members of Congress in his testimony this week. U.N. Secretary General Ban Ki-moon stressed the need for any intervention to have the approval of the U.N. Security Council, though U.S. Ambassador to the United Nations Samantha Power told reporters yesterday that the United States will not press for such a resolution given Russia and China’s obstinacy. Members of the European Unionquestioned the likely effectiveness of planned strikes, and the Catholic Church called for the international community to use peaceful means to resolve the Syrian civil war.

A crossing on Turkey?s border with Syria has gone out of control due to the flow of refugees, allowing outlawed groups to move freely between the two countries

The U.S. State Department on Friday moved to reduce its diplomatic presence at its consulate general in Adana, Turkey

US moves to reduce diplomatic personnel in Turkey over threats

The U.S. State Department on Friday moved to reduce its diplomatic presence at its consulate general in Adana, Turkey

So far there is no sign of the different sides reaching an agreement on the Syria crisis at the G20 summit in St. Petersburg. The Russian government reiterated on Thursday its rejection of intervention, while the US made it clear that it would no longer seek a consensus in the UN Security Council. Obama is undermining the United Nations, commentators criticise, and see Putin gaining the upper hand.

Michael Gerson: A stand for Syria ? and Obama

In mid-June, the Obama administration said it would begin arming Syrian rebels, partly in response to a previous use of chemical weapons by the regime of Bashar al-Assad. Refugee officials in Jordan measured a large, temporary increase in the number of men crossing back into Syria, led by rumors that AK-47s would be distributed at the border. The guns were, and remain

The Syria question Congress must answer

Congress is asking the wrong questions about Syria. The issue can?t be who wins that country?s civil war. It has to be whether the regime of Bashar al-Assad should be punished for using chemical weapons ? and, if the answer is yes, whether there is any effective means of punishment other than a U.S. military strike

Humanitarian Intervention: The Human Rights Gift that Keeps on Giving to U.S. Imperialism

First published by the author on September 4, 2013

With the announcement by the Obama administration that it intends to launch an attack on Syria in response to the chemical attack alleged to have been carried out by the Syrian government, the U.S. Administration has again assumed for itself the role of global ?gendarme,? policing, punishing, and as its? drone warfare program demonstrates, even executing the natives of the global village at will. In its single-minded dedication to this global role, the Obama administration has also freed itself from the constraints of international law as the President shamelessly declared that he was ?comfortable? operating outside of the global legal frameworks that the U.S. itself helped craft.

World leaders tell Obama there is no military solution in Syria

US President Barack Obama faced growing pressure from Russia’s Vladimir Putin and other world leaders yesterday (5 September) to decide against launching military strikes in Syria, which many of them fear would hurt the global economy and push up oil prices.

At a summit of the Group of 20 (G20) developed and developing economies in St. Petersburg, Putin greeted Obama with a thin smile and a businesslike handshake, a clear sign of the strains between them over how to respond to a chemical weapons attack in Syria.

The Saddamisation of Bashar al-Assad: how Britain may just have escaped another Iraq

The Commons chose to stand back from the cusp of military intervention in Syria. Is this a knock for British national pride or a chance to learn from our imperial past?

US Secretary of State John Kerry will discuss Syria, Egypt and Israeli-Palestinian peace talks with European officials on a weekend trip to Vilnius, Paris and London, where he will see Palestinian President Mahmoud Abbas, the State Department said yesterday (5 September).

Kerry’s trip comes as US President Barack Obama is trying to persuade the US Congress to authorise a limited military strike against Syria for its alleged use of sarin gas against its own people on 21 August.

French president?s attempt to convene a ?mini summit? of European leaders to present a common front was a conspicuous failure