It emerges that some of the people in a video of Norwegian Prime Minister Jens Stoltenberg posing as a taxi driver were paid for taking part. 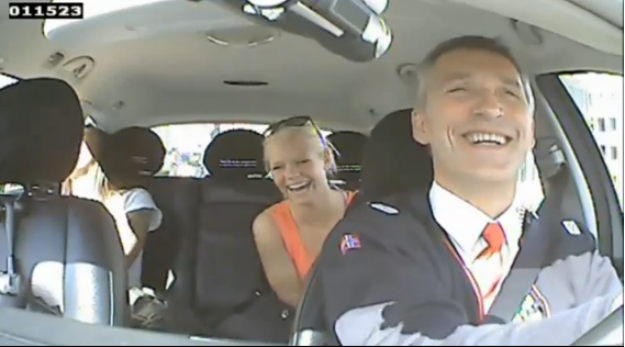 In an effort to get closer to his people and hear out their concerns, Norwegian Prime Minister Jens Stoltenberg apparently spent a Friday afternoon in June driving a cab around Oslo incognito. The stunt was captured on video, and his disguise does not last long. Eventually, his passengers recognize him, and their reactions are predictable: What in the world is the prime minister doing behind the wheel of my cab?

The UK has threatened to appeal to the EU Commission for a legal resolution in an escalating dispute over the contested territory of Gibraltar, as Spain refused to remove border checks affecting tourists and workers.

A spokesman for UK Prime Minister David Cameron told journalists yesterday (12 August) Cameron was “very disappointed” by Spain’s failure to remove the checks over the weekend.

A political proposal to impose road tolls on foreign car drivers has become a feature of the German election campaign, but the European Commission made clear yesterday (12 August) that it would not accept any measure which amounts to discrimination on the ground of nationality. EurActiv Germany contributed to this article.

Horst Seehofer, head of the Christian-Social Union (CSU) which is the Bavarian sister party of Merkel’s CDU, has been requesting for many years that road tolls be introduced for foreign car drivers, using German, or at least Bavarian roads. Over the weekend he renewed his request, adding that without such road tolls for foreigners he would refuse to sign a coalition agreement with Merkel after the election.

Tension between Spain and the UK over the disputed territory of Gibraltar looks set to increase this week following Spanish reports that it intends to lodge a complaint with the United Nations and a planned arrival on the rocky outcrop later this week of UK naval ships.

Centuries of friction over Gibraltar, a British overseas territory to which Spain lays claim, flared up this month after Spain complained that an artificial reef being built by Gibraltar would block its fishing vessels.

Merkel accused of lying about the risk of second Greek bailout

German opposition parties accused Chancellor Angela Merkel yesterday (11 August) of lying before elections next month about the risks of a new bailout for Greece, after a magazine reported the Bundesbank expects it will need more European aid in early 2014.

Der Spiegel quoted an internal document prepared by the German central bank as saying that Europe “will certainly agree a new aid programme for Greece” by early next year at the latest.

Immigrants clash with police in Greece

Dozens of immigrants being held in a Greek detention centre hurled stones at police guards and set mattresses on fire in protest over the extension of their detention, Greek police said yesterday (11 August).

Greece, struggling to exit its worst financial crisis in decades, has become a frontier for immigrants mainly from Asia and Africa, who seek a better life in Europe but often end up living in cramped detention centres.

Berlusconi: has the Artful Dodger met his match?

Unlike Oliver Twist’s friend, Berlusconi will not end up in a penal colony, or indeed in a prison cell, but will continue to be an uncomfortable presence in Italian political life. For how long?

UK, Spain to engage in legal battle for Gibraltar

We?ve suspected for some time that the French and German governments? refusal to take part in the Iraq war had something to do with their access to independent overhead imagery satellites. Briefly, France and Germany did (with the HELIOS and SAR Lupe programs respectively), and didn?t take part at all. Spain and Italy had some access to French imagery and had advanced plans to get their own. They made a limited commitment. The UK, Australia, Denmark, and the ROK relied on the United States and were, in a phrase that should be better known outside Australia, all the way with LBJ. Turkey didn?t have its own, although it has since acquired a satellite from Italy and it did have liaison staff at the little-known EU Satellite Centre, but it probably had ample intelligence from human sources.

France: No change to 2013 forecasts

France’s finance minister denies that the eurozone’s second-biggest country has revised down its economic prospects for 2013.

In the summer lethargy, the Italian government is attempting to pass new constitutional amendments that would take power away from Parliament and concentrate it in the executive branch’s hands. Public debate has been avoided, despite potentially dramatic consequences.

The UK government is considering “unprecedented” legal action against Spain over additional checks at the Gibraltar border.

The unsafe house of Italy: violence against women does not break for summer

Italy has just passed a new law offering better protection for victims of domestic violence.  But will this be enough to work against the damaging effect of under-funded safe houses and public figures who still blame women for their abuse?

On its last full day before closing for the summer, the Italian government passed new laws last week to combat the high levels of violence against women in the country.  ?Femicide?has become a topic much discussed in the media, as the last several years have seen significant media coverage of a series of brutal murders of women by their partners or former partners.