Many of us find the transition from graduate school to the world of the gainfully employed to be a challenging one. One moment, you?re happily ensconced in a library carrel, surrounded by your beloved field notes and cranking away at your dissertation. The next moment, you?re lecturing to two hundred first year university students who may be in the room solely for a general education credit, and who could care less about your deep and abiding affection for kinship theory. Or maybe you?re sitting across the table from a nonprofit interviewer who wants to know whether your experience studying the effects of globalization on Ilongot gender roles will make you a good candidate to work with a team of social entrepreneurs promoting fair trade coffee in Indonesia.

THOMAS HUXLEY WAS a polymath and supporter of Darwin. He surveyed the whole world through its long history and helped to establish the foundations of the great Evolutionary paradigm about which I shall be talking shortly. Huxley’s example encourages

Safar/Voyage brings thousands out to Museum of Anthropology

The startling and sometimes provocative collection of contemporary Middle Eastern art currently on view at the Museum of Anthropologyappears to be hauling in the audiences. Safar/Voyage has turned out to be one of the museum’s most-attended show in

Etruscans (maybe) not from Anatolia

There have been a few papers on the topic of Etruscan origins that argue in favor or against the Anatolian origin hypothesis. Two main lines of evidence exist on the topic: discontinuity between Etruscans and modern Tuscans (except some isolates); (perceived) similarity between Etrsucans’ mtDNA and that of modern-day Turks. 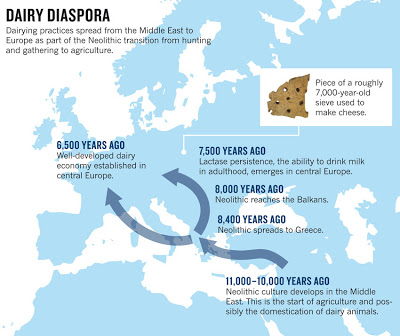 A couple of interesting quotes from this story:

That next step happened slowly, and it seems to have required the spread of lactase persistence. The LP allele did not become common in the population until some time after it first emerged: Burger has looked for the mutation in samples of ancient human DNA and has found it only as far back as 6,500 years ago in northern Germany.