If Gibraltar wants to solve its border headache with Spain, it should join Schengen 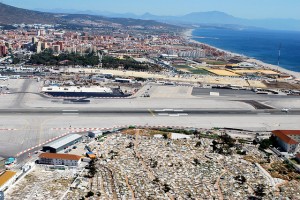 So the Spain-Gibraltar border dispute rumbles on. Queues at the land border to enter Gibraltar persist, and suggestions abound that Spain may introduce a charge to cross from Gibraltar into Spain. Meanwhile Tory MEP for the South West & Gibraltar, Ashley Fox, hascalled on the European Commission to take immediate action and send a team to check what?s happening at the border.

Gibraltar a reminder of the headaches of empire

Dispute over Rock shows how UK?s remaining colonial outposts can cause friction with allies and headaches in Whitehall

Dozens of people have been arrested in Spain and France on suspicion of smuggling Chinese migrants into Europe and the US, police say.

German election update: Would the SPD rather stay in opposition than become Merkel’s “lackeys” again?

Given that August is traditionally been a slow news month, we thought we’d revive an old Open Europe tradition – German poll Fridays (we know you’re excited!). Its worth remembering we are only 6 weeks away from elections in Germany which will to a large extent determine developments in the eurozone and in the push for EU reform. So where are we at? Well the polls have been remarkably stable for the past few months with minimal fluctuations:

EU needs a spark in its electricity grid ambitions

The European Commission has attempted to fast-track strategic electric power transmission projects by streamlining planning procedures. But that initiative, proposed in 2011, could itself perhaps be speeded up, writes Gerard Wynn.

Gerard Wynn is a Reuters market analyst. The views expressed are his own.

The European Union will have to use all means at its disposal to convince people to accept construction of priority power transmission lines equal to four times the Earth’s diameter, which are needed to integrate rapidly growing renewable power.

Options for speeding up planning approvals include more public engagement at an earlier stage and even prettier pylons.

The British Police: getting away with murder since 1969

827 people have died during or following police contact since 2004. Families have struggled hard for justice, encountering multiple failures and police collusion from the IPCC. Why is police accountability failing in this most serious of issues?

Being a queer artist is easy. Having an impact is harder; making a community more accessible to others. From Hungary, where an amendment to the constitution explicitly limited marriage as only possibly being between a man and a woman in March, to Bosnia and Herzegovina, queer artists are changing mentalities. Kati, Mel, Tonci, Andrea and Dorothee explain their stories

What would leaving the EU mean for the UK’s services sector?

Our Director Mats Persson writes on his Telegraph blog,

The UK?s services sector accounts for around 75 per cent of the country?s GDP. Britain?s 0.6 per cent growth in the second quarter of this year was largely thanks to this sector, which grew at its fastest rate in over two years.

Early elections held this autumn are becoming increasingly likely in the Czech Republic. The parties negotiated a dissolution of parliament on Thursday after the government of experts appointed by President Milo? Zeman lost a vote of confidence. For his part Zeman wants to maintain the government in office against the will of parliament. The president is flying in the face of democracy, in part because the constitution lets him do just that, commentators write.

The Czech Parliament is expected to vote next week to dissolve itself, clearing the way for early elections to end a stand-off with the president that has crippled policymaking for nearly two months.

Opinion polls show the centre-left Social Democrats, who have pledged to undo some of the collapsed centre-right cabinet’s pension reform and tax utilities and banks to boost public coffers, are likely to win an early vote by a double-digit margin.

Allegations follow storm over town?s attempts to ban asylum-seekers from visiting public facilities, including sports premises and a swimming pool