As recently stated Ekşi Sözlük is one of the major internet sites that harbored an internet user culture in Turkey. From time to time, it has been targeted by conservative or Islamist citizens who are quite annoyed with the existence of such a major independent site despite the growth of Facebook and Twitter. There are more than 20 thousand contributors to the site and it is hard to define a particular ideology that governs these users. Everybody can find a spot as long s/he contributes good entries. However, Islamists in their usual ranting of victimization believe that they are excluded from the site. Instead, they want it to be shut down.

I believe that there is an understanding that there must a more concentrated attack against Ekşi Sözlük.

First comes a Twitter TT campaign, claiming that there is blasphemy against Prophet.

Then comes a DNS hacking.

Then comes some lawyers filing against the site.

As the pro-government logic imagines things in institutional forms, it seems that like buying or silencing all traditional media institutions they can do the same for new media. It is a fallacy they will recognize soon. New media works in different ways and suppressing one medium will not silence the critics…

A businessman living in Sakarya province, İbrahim Aydın, has filed a complaint against one of Turkey?s most popular online forums, Ekşi Sözlük

ECHR judge Işıl Karakar says her Turkish collegues let ideologies affect their judgements and think of their ?fundamental job? as protecting the state 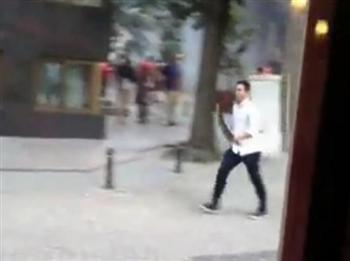 Prosecutor seeks up to 27 years in jail for fugitive ?man with machete?

A public prosecutor has demanded up to 27 years in prison for the ?man with a machete?

Lawyer and Sufi thinker Ömer Tuğrul İnançer?s contentious comments that pregnant women?s presence in public is ?disgraceful? fall within the remit of freedom of expression

We all know that the Turkish media are under heavy political pressure by the government. Journalists who have been fired from their papers have made the pressure issue public. Now, many people in Turkey and abroad are more or less aware of the political pressure.

However, there are very few pieces devoted to explaining the other end of the pressure, the stories of journalists who support whatever Prime Minister Recep Tayyip Erdoğan does.

In this piece I will try to explain those journalists who found themselves in a position of justifying Erdoğan’s unacceptable behavior and actions.

1 thought on “EFD Rights Watch: Ekşi Sözlük is the target of organized attacks…”