Tens of thousands of Greeks once again brought much of public life to a complete standstill with a general strike on Tuesday. They are protesting against the troika’s demand for job cuts in the public sector, which will be put to vote in parliament today, Wednesday. The EU governments must insist on streamlining bureaucracy, some commentators urge. Others warn against keeping up the huge pressure on Greece to make cutbacks.

The vote was the first major test for Prime Minister Antonis Samaras‘s two-party coalition since losing an ally over the abrupt shutdown of the state broadcaster last month, which left it with a scant five-seat majority in the 300-seat parliament.

EU moves to put Hezbollah on its terror list

The European Union could blacklist Hezbollah’s military wing while stressing it is open to talking to the militant Lebanese movement’s political faction, under a proposal by the EU’s foreign policy chief, EU diplomats said yesterday (17 July).

European governments have been deadlocked over the issue since May when Britain asked for the Shiite Muslim group’s military wing to be put on the EU terror list, citing evidence it was behind a deadly bus bombing in Bulgaria last year.

How Many European Recessions?

If European countries used similar criteria to those used in the US for determining economic cycles, the Great Recession in many of them would quite possibly be considered an ongoing five-year slump. Such measurement issues may sound like a matter of minor technical details, but they can have significant real-world implications.

Italy?s prime minister is facing a growing revolt from within his centre-left party over the crisis surrounding the deportations of a Kazakh family

The EU’s structural funds – heading in the wrong direction on the motorway?

A new report published by the EU?s Court of Auditors yesterday provides an interesting reminder of the failings inherent in the current EU regional policy, whereby the cash is recycled between every region in every member state ? irrespective how wealthy ? via the EU’s structural funds.

Italy: A new and unexpected ally on EU reform for David Cameron? 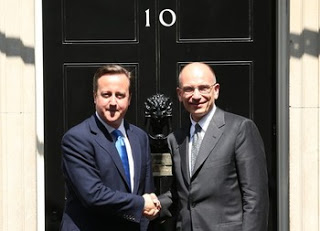 Italian Prime Minister Enrico Letta has probably made a lot more friends than he expected on his first official visit to the UK. This is largely due to a couple of quite sensible remarks he has made about the future of Europe and Britain’s role in it.

A ghost of ignorance? Race and racism in contemporary Italy

In Italy, race and racial abuse do not receive much discussion in the public sphere, mainly being seen as an issue of history. Yet, in light of recent incidents with Cécile Kyenge, there is a need to scrutinize historical and cultural legacies today.

Hannah Grant, a chef who used to work for highly influential Noma (among other places), is now the chef for the Saxo-Tinkoff cycling team currently competing in the Tour de France. She cooks for the entire team out of a food truck.

The European Commission hinted in May that Google?s proposals to fix the way it handles search results, deemed to be anti-competitive, needed to be improved. Joaquin Almunia, the European Competition Commissioner, has now confirmed this decision.

With Europe?s record unemployment set to rise, many young people hope that internships and traineeships will give them the experience needed to climb the first rung of their career ladder.

Imagine you?re wandering the streets of the EU quarter deciding where to spend your hard-earned Cheque-Repas for a sandwich. You pass one lunch spot that?s selling a sandwich for ?4.00 and another place that is selling almost the exact same sandwich for ?5.48 (37% more). If you?re like most people, you choose the ?4.00 sandwich. Some people may still go for the more expensive option, but over time, the place selling the ?5.48 sandwich will either have to find a way to lower their prices to be competitive or run the risk of going out of business.

The EU has maintained its share in global exports over the past decade, whereas other mature economies have seen theirs decline considerably, most notably the US and Japan, says Daniel Gros.

Daniel Gros is director for the Centre for European Policy Studies and a member of the World Economic Forum?s Global Agenda Council on Europe.