If you thought the wave of French attacks on European Commission President José Manuel Barroso was ebbing away, you were wrong. Today, it was the turn of French Socialist MP Claude Bartolone – who’s also the President of the National Assembly, the lower house of the French parliament – to fire on all broadsides.

Bulgaria, protest for the future

Bulgarian citizens are protesting across the country against the capture of their government and for a meaningful democracy. A memorandum from Sofia outlines the heart of their case.

Croatia: A cool reception on arrival

European leaders to meet as concerns over future grows

INTERVIEW / Ahead of an EU summit in Brussels, Thierry Repentin has dismissed as bluster the recent spate of attacks by French ministers against the European Commission. EurActiv France reports.

Germany?s Case Against the ECB

The German Constitutional Court’s decision last year to allow Germany’s government to accede to the European Stability Mechanism should leave little doubt about how it will rule on the ECB’s pledge to purchase distressed eurozone members’ sovereign debt. But, in courts, as in the open sea, predictions often prove unreliable.

ECB president Mario Draghi must act carefully so that the eurozone does not become a major casualty of US monetary policy, writes Ralph Atkins

The streets of Sofia are awash with demonstators: the terms of this protest movement, as in Sao Paulo and Istanbul, are the twin themes of justice and equality.

Those involved in sovereign debt restructuring could learn a lot from the US corporate bankruptcy process, writes Komal Sri Kumar

Is Greece?s bailout running out of cash? 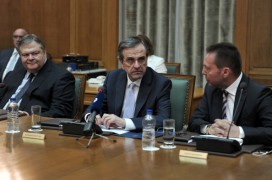 Flexibility is bad for Europe?s banks

Peter Spiegel, Brussels bureau chief, outlines how many of the main elements of the EU?s path to banking union have either been water down or delayed