Greece deprived of its public broadcasting service: More than a bad soap opera

Flawed it may have been, but ERT, Greece’s public broadcaster, was one of the few things holding the country together during these difficult times. 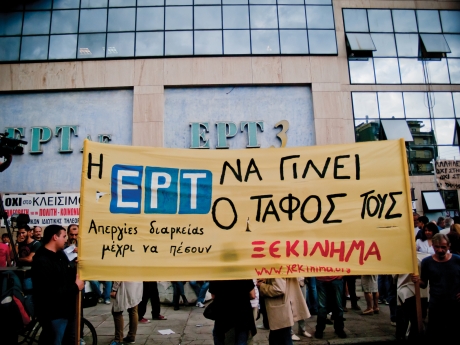 Employees and members of the public demonstrate outside the offices of ERT3. Demotix/Giorgos Kasapidis. All rights reserved.

Greece’s government announced the immediate closure of public television and radio broadcaster ERT in a move that reportedly affects about 2,700 jobs.

Yesterday, the Greek government forcibly shut down the state broadcaster, ERT, sending in the police to drag journalists away from their microphones. The government claimed that the shutdown was the result of inescapable austerity measures. In response, the European Broadcasting Union — an umbrella group representing public broadcasters across Europe — has set up a makeshift mobile studio where ERT broadcasters can continue to work and stay on air.

Greek government shuts down state broadcaster, police force journalists out of the building

Michael sez, “The Greek government forcibly shut down transmissions of all TV and radio stations operated by the state-owned broadcaster ERT, with police ejecting journalists and other employees who were occupying the buildings.”

The scandal that engulfed the Czech prime minister 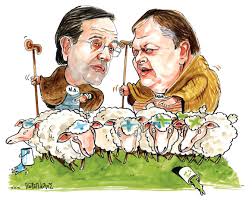 Rumors have been growing since last week after the decision of the head party of the coalition government New Democracy to shut down the public broadcaster ERT and proceed to massive layoffs. This decision brought continuous and harsh demonstrations from the labor unions of the country, while stirring up the existing concerns regarding the homogeneity of the coalition government as well as a series of other major issues that have been dealt inefficiently by the government the last couple of weeks.

The closure of ERT: public service broadcasting and austerity politics in Greece

On Tuesday, the Greek government announced the immediate closure of their public broadcaster, ERT. This simple piece of news from Greece came as a shock to the world. Yet this event is symptomatic of the relatonship between media and politics in today’s world

After the sudden closure of Greece’s national broadcaster ERT the trade unions have called a 24-hour strike for today, Thursday. The government explained the close-down saying that ERT was an “incredible example of waste”. This dictatorial act can’t by justified by the need to cut costs, some commentators write indignantly, while also pinning some of the blame on the troika’s austerity policy.

The closure of the Greek broadcasting corporation

Hilary Wainwright reports from Thessaloniki on what happened when the state ordered Greece?s state broadcaster to shut down

At 11.30 on the evening of 12 June, the TV screens in the Thessaloniki office of the Hellenic Broadcasting Corporation (ERT) went blank. Black. For a few moments there was the silence of shock and disbelief.

No man?s land: The authoritarian shut down of ERT 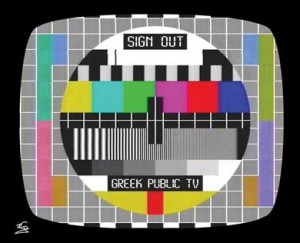 The head party of the Greek coalition government, New Democracy, took yesterday a sudden and in any manner authoritarian decision to shut down the public broadcaster ERT. The public-led company was occupying almost 2,700 employees being the largest news network of the country. Within the new legislative framework, it is expected that ERT will start running again next September having finalized the process of recruiting 1000 employees. What is the story behind?

The Structural Limits to Euroscepticism

After the many months of a fast evolving debate on the European Union here in the UK, recent weeks have seen some of the steam being let out. Partly this is due to the fading profile of the eurozone crisis in news agendas, and partly because everyone is waiting for the next peg on which to hang their statements. The launch of a Tory website to press for a referendum (in a rather coy way, it must be said) is part of the longer game. Even yesterday?s rumblings about JHA opt-(back-)ins don?t seem to have made the weather.

As a concession to Paris, the EU wants to grant the member states some say regarding the audiovisual industries in the negotiations on a free trade agreement with the US. France threatened on Thursday to use its veto to protect its film industry. Some commentators understand France’s refusal to put its proud culture on a par with commercial export commodities. Others criticise that too much protectionism would only harm European cultural production.

The death of Savita Halappanavar lifted the lid on the church, the state, and women’s reproductive rights in the Republic of Ireland, and has been the catalyst for the new legislation on the rights of pregnant women proposed last week. 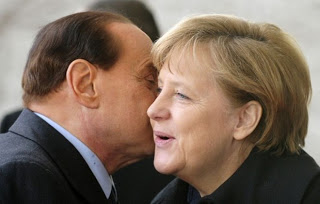 With the next meeting of EU leaders only one week away, Silvio Berlusconi has stepped his anti-austerity rhetoric up by a few notches. He said yesterday,

At the G8 summit in Enniskillen in Northern Ireland, the fight against global tax dodging is on the agenda today, Tuesday. A first step in this direction was taken on the weekend by Prime Minister David Cameron, who committed the British overseas territories and Crown dependencies to more transparency. This is a good sign, commentators conclude, voicing hopes that international rules will soon put an end to the unfair business practices of multinational companies.

“Doublethink”: the latest threat to women’s rights in Spain

George Orwell?s ?1984? is alive and well in Spain as the Minister for Justice talks- up plans to deny women the right to an abortion, says Liz Cooper

Letter from Tirana: Who is a guest in Europe?s house?

The political establishment has a decisive role in determining the place of hatreds in society; with adequate rules, laws and institutions it can marginalise and neutralise or, on the contrary, tolerate and encourage them.

Populism: a European warning shot and what to do about it

This sudden emergence of populism was in fact a true sign of modernity. This is what you might describe as a warning shot ? and when you see it happen, you have to realize that something is very wrong with democracy. An interview.

Why France can hold up EU-US free trade talks 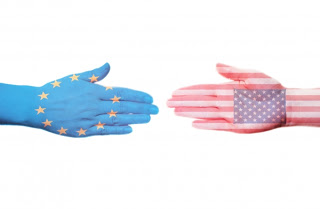 David Cameron wants to use the gathering of G8 leaders in Northern Ireland next week to launch formal negotiations on the planned EU-US free trade agreement. But progress depends on breaking the deadlock in talks today over France’s insistence that any agreement must include protections for its film and TV industries against American imports. These talks are to give the European Commission a mandate to start negotiations.

The country?s hard-won welfare state system is in reverse gear, with rights and social justice being handed back to charities, as was the case in pre-constitutional Spain, over 35 years ago.

European Award for Helping Victims of the Spanish Mortgage Crisis

[Links are to Spanish-language pages except where otherwise indicated.]

The European Parliament announced the winners of this year’s European Citizen’s prize. One of the awards went to the Mortgage Victims? Platform (PAH in Spanish), a grassroots organization dedicated to alleviating the suffering of people in Spain who have been affected by the subprime crisis and evicted from their homes. According to the European Parliament’s website [en], this award is given to individuals and organizations that

France threatened to block the start of free trade talks between the European Union and the United States.

Letter from Tirana: Who is a guest in Europe?s house?

The political establishment has a decisive role in determining the place of hatreds in society; with adequate rules, laws and institutions it can marginalise and neutralise or, on the contrary, tolerate and encourage them.

Populism: a European warning shot and what to do about it

This sudden emergence of populism was in fact a true sign of modernity. This is what you might describe as a warning shot ? and when you see it happen, you have to realize that something is very wrong with democracy. An interview.

What does the data actually tell us about anti-Islamic violence post-Woolwich, and how do Briton’s views of Islam and Muslims compare with the rest of Europe?

According to one of the ?Woolwich Angels?, Ingrid Loyau-Kennett, the Woolwich murderers reported their aim was ?to start a war in London tonight?

Today’s report from the All-Party Parliamentary Group on Migration exposes deep injustice in new restrictions on family migration. Much pain and trouble might have been avoided had the government paid due regard to human rights.

When it comes to designing public policy on any issue concerning family life you would think that human rights would be a pretty good place to start.

Death in Woolwich: a case of déjà vu?

The Prevent strategy in the UK has not worked. Prevent 2.0 needs a fundamental rethink if the mistakes of the past are to be avoided. The old faith-based  policy foundations must be broadened to include secular and frontline experts, and ?moderate? religious leaders must be scrutinized more closely, says Yasmin Rehmah 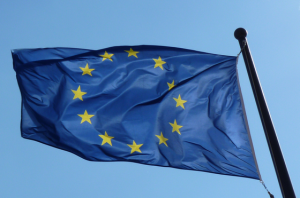 Charles Grant?s poor pieces yesterday about national parliaments and EU decision making set me thinking: what think tanks are there that actually are trying to come up with solutions to make EU democracy work better?

Mervyn King on the solutions to the eurozone crisis 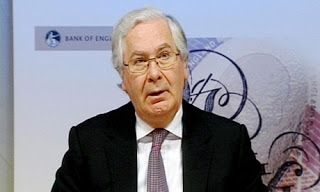 The FT has just posted an interesting and lengthy interview with outgoing Bank of England Governor Mervyn King (pictured), conducted by the FT?s Martin Wolf. Many pressing topics are covered but the short discussion about the eurozone caught our eye (as might be expected).

As a concession to Paris, the EU wants to grant the member states some say regarding the audiovisual industries in the negotiations on a free trade agreement with the US. France threatened on Thursday to use its veto to protect its film industry. Some commentators understand France’s refusal to put its proud culture on a par with commercial export commodities. Others criticise that too much protectionism would only harm European cultural production

Europe beyond and without federalism

Ideology and political orientation are inseparably attached to the historical-cultural context that engendered and sustained them. To valorize the methods and objectives of a given system of values, as the ultimate telos of a political power impulse, is to bestow upon subjective ideas a supracontextual patina and to proceed with treating them as either self-evident truths of a functional-technical sort or as moral-legal axioms that justify ex ante specific courses of action or series of thoughts. All ideologies are potentially subject to the tendency of producing a concrete schema out of their complex of perceptions, convictions and logical concatenations; and, as a matter of historical fact, all ideologies can inwardly degenerate from their (self-) reformative/propositional form to their (self-) reactionary/conservative other, in the sense that what may enter the theatre of the historical-political as a struggle for the realization of the possibility to think otherwise, ends up morphing into a robust doctrine or of a set of sectarian shibboleths that determine an arbitrary terminus to thinking and doubting.

The EU has long had a problem of legitimacy, but the euro crisis has made it worse. According to Eurobarometer, 72 per cent of Spaniards do not trust the EU. The Pew Research Centre finds that 75 per cent of Italians think European economic integration has been bad for their country, as do 77 per cent of the French and 78 per cent of the Greeks. 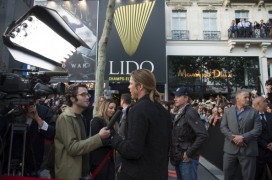 When EU and US officials launched new talks on a transatlantic trade deal earlier this year ? an issue of such import that President Barack Obama announced it in his February State of the Union address ? many thought the most contentious issues would be agricultural, like US exports of beef with synthetic hormones.

German Constitutional Court live blog: One of the most important cases in the Court’s history? 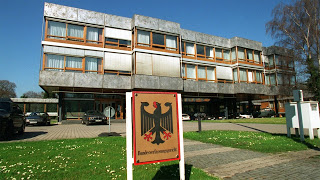 The German Constitutional Court?s (GCC) hearings into the legality of the ECB?s actions to combat the eurozone crisis ? and specifically the OMT bond buying programme ? kicked off this morning. (See here for the background). In a front page leader, FAZ describes the case as one of the ?most important? in the court?s history.