Today, a bipartisan coalition of 86 civil liberties organizations and Internet companies ? including the Electronic Frontier Foundation, reddit, Mozilla, FreedomWorks, and the American Civil Liberties Union ? are demanding swift action from Congress in light of the recent revelations about unchecked domestic surveillance.

Late last week, as revelations about the National Security Agency’s telephone and internet data gathering programs splashed across the news, attorney Michael Overly heard from one of his clients, a consumer product company that had been looking at moving email systems to a cloud service provider. They’d decided to put their cloud project on hold. “They

By now, you’ve likely heard of Edward Snowden, the former NSA contractor who leaked secret documents to the press regarding that agency’s electronic surveillance activities. From Glenn Greenwald’s excellent coverage for The Guardian, here are a few of the most interesting passages from interviews with Snowden.

The NSA?s Word Games Explained: How the Government Deceived Congress in the Debate over Surveillance Powers

ANDREA MITCHELL: ?Why do you need every telephone number? Why is it such a broad vacuum cleaner approach?? JAMES CLAPPER: ?Well, you have to start someplace.??NBC Meet the Press, this past Sunday

The NSA’s PRISM slides get a makeover

When the Washington Post and the Guardian revealed the existence of the NSA intelligence-gathering program PRISM last week, they both relied on a set of horrifically bad slides reportedly prepared by the agency and presented to a group of senior analysts. As I wrote at the time, the slides continued the U.S. government’s tradition of generally awful PowerPoint slides.

Ai Wei Wei, the renowned Chinese dissident who has been relentlessly persecuted by his own government, has written an op-ed for the Guardian comparing Chinese totalitarian surveillance with Prism and related NSA spying:

That NSA Prism PowerPoint deck: A better-designed version, and what’s in the missing slides?

“Dear NSA, let me take care of your slides,” writes Emiland, in a redesigned version of the Prism leak. “Do whatever with my data. But not with my eyes. Those slides are hideous.”

The American Civil Liberties Union (ACLU), along with the New York Civil Liberties Union, has filed a lawsuit against the United States government over the National Security Agency?s (NSA) phone spying program. The ACLU believes that such a surveillance program is a violation of the organization?s constitutional rights, specifically the first and fourth amendments.

European politicians on Monday called on Washington to explain the spying activities of the US intelligence services in Europe. Edward Snowden, the man who exposed the Prism scandal, has fled to Hong Kong. Some commentators praise whistleblowers like Snowden as fighters against the Big Brother state. Others observe that in the digital world the private sphere has in any event long since ceased to exist. 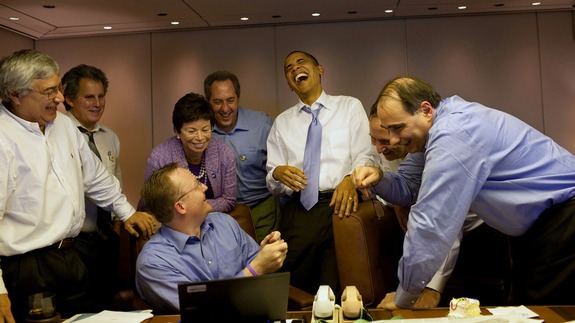 Barack Obama is checking your email, so clean up your inbox.

Many people freaked over news of NSA’s PRISM Internet surveillance program, but one Tumblr decided to take a lighter approach to the scandal

US allies under fire for spying

Revelations on the U.S. Internet spying program have raised awkward questions for allies

Data Won the U.S. Election. Now Can It Save the World?

Obama seemed to say last week that U.S. drones are out of the business of killing militants who aren’t senior al-Qaida leaders. Then he killed a Pakistani Taliban leader this morning.

The New York Times’ A1 feature today: “Leak Inquiries Show How Wide a Net U.S. Cast.” Sweeping investigations into leaks of secret information now involve hundreds of government employees, and have created a powerful chilling effect for press. A major blow to our right-to-know: government officials now fear being investigated for simply speaking with a reporter.