The PRISM spin war has begun 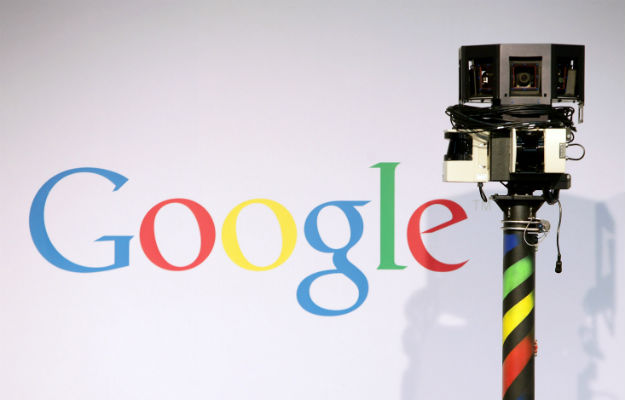 The war over how to spin revelations of the National Security Agency’s latest spying program has officially begun.

Anonymous lays out plan for its independent news site, funded by $55,000 from Indiegogo

It?s been some six weeks since ?hacktivist? group Anonymous raised $55,000 from Indiegogo to build its own news site, and now the group has provided a few details about what it is cooking up.

The latest version of venture capitalist Mary Meeker?s Internet Trends report arrived this morning, and some of the most interesting of her 117 slides are about the scale and growth of Internet use and businesses in China.

EFF filed an amicus brief (PDF) in support of Facebook in California state appellate court yesterday, urging the court to protect the privacy rights of social media users by requiring that all requests for their account information?including content?be directed to the users, rather than to third parties like Facebook.

Social Networks: The Best Thing to Ever Happen to Relationships 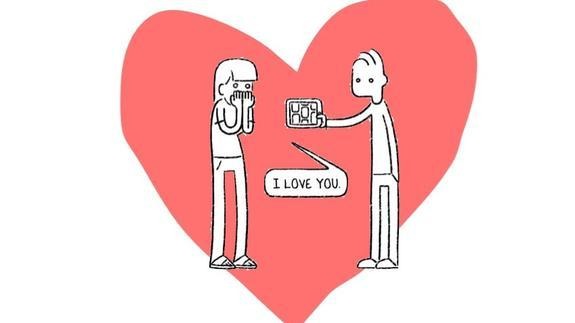 Relationships can be challenging, but social networks make connecting with the special people in your life a little bit easier. Connecting and tweeting, Instagramming and poking.

Nasdaq has agreed to pay a $10 million penalty to settle federal civil charges after regulators.

Over 400 million tweets are posted every day. But accessing 100% of these tweets (say for disaster response purposes) requires access to Twitter?s ?Firehose?. The latter, however, can be prohibitively expensive and also requires serious infrastructure to manage. This explains why many (all?) of us in the Crisis Computing & Humanitarian Technology space use Twitter?s ?Streaming API? instead. But how representative are tweets sampled through the API vis-a-vis overall activity on Twitter? This is important question is posed and answered in this new study, which used Syria as a case study.

New documentary tracks the successes and failures of surveillance technologies used in the Boston bombings manhunt.

The Controversial Topics of Wikipedia

Can we quantify the topics that are most controversial on Wikipedia? Turns out, yes. Wired Science blogger Samuel Arbesman has the report.

When President Barack Obama signed a new open data initiative earlier this month, he argued that providing government data to entrepreneurs enables them to create new businesses and strengthen the economy

Since the crypto-currency Bitcoin hit the limelight, many libertarians and privacy advocates have heralded it as anonymous, digital cash. But the world’s biggest Bitcoin exchange?and the U.S. regulators breathing down its neck?see things differently.

From Bad to Worse: Online Repression in the Gulf

In Kuwait, dozens imprisoned in an effort to stifle online dissent.  In the United Arab Emirates, a sentence of 10 months in prison for describing a court hearing without ?honesty and in bad faith.?  And in Qatar, a draft cybercrime law that threatens the relative freedom of expression enjoyed by residents.

The Bradley Manning Trial: Everything You Need to Know 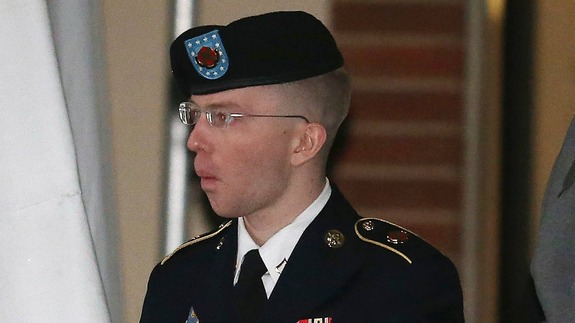 Bradley Manning, the source who provided Wikileaks‘ most important revelations, is set to go on trial more than three years after his arrest in May 2010. His court martial is set to begin on Monday in Fort Meade, Md., and is expected to last through the summer

This Week in Review: Bradley Manning and leak ethics, and the future of photojournalism

Aiding a publisher as aiding the enemy?: There were quite a few developments on the leaks/government surveillance front this week, led by the revelation that the U.S. National Security Agency is collecting phone records and Internet data from millions of Americans on a daily basis. There are tons of places to read up on the implications of the former story (I?d encourage you to start at Memeorandum), and we?ll probably find out more about the latter one today. I?ll focus here on two other stories with more direct connections to journalism ? the Bradley Manning trial and the Department of Justice?s seizure of journalists? records in leak investigations ? but first, a few notes on yesterday?s news about the PRISM Internet data collection program.

In Bradley Manning‘s first day of trial, the defense and the prosecution clashed over how to characterize the 25-year-old Wikileaks source. To the prosecution,

The court-martial of a soldier charged with using the WikiLeaks website for the biggest leak of classified..

Spy software sold to government agencies around the world is believed to have been used in an attempt to hack a U.S. woman who has been critical of a powerful Turkish group.

My colleague Fernando Diaz has continued working on an interesting Wikipedia project since he first discussed the idea with me last year. Since Wikipedia is increasingly used to crowdsource live reports on breaking news such as sudden-onset humanitarian crisis and disasters, why not mine these pages for structured information relevant to humanitarian response professionals?

Anonymity, Encryption, and Free Speech: What Nations Need to Do

In his landmark report to the 23rd session of the Human Rights Council, Frank La Rue, the U.N’s free speech watchdog, makes clear that anonymous expression and secure communication are critical for an open society. We gave you a quick look at that report yesterday. Now we want to take a deep dive into his support for your rights to anonymity and encryption, and what countries need to do to reflect his conclusions.

Confirmed: The NSA is Spying on Millions of Americans

Today, the Guardian newspaper confirmed what EFF (and many others) have long claimed: the NSA is conducting widespread, untargeted, domestic surveillance on millions of Americans. This revelation should end, once and for all, the government’s long-discredited secrecy claims about its dragnet domestic surveillance programs. It should spur Congress and the American people to make the President finally tell the truth about the government’s spying on innocent Americans.

Schneier: what we need the whistleblowers to tell us about America’s surveillance apparatus

Bruce Schneier writes in The Atlantic to comment on the leaked court order showing that the NSA has been secretly engaged in bulk domestic surveillance, recording who everyone is talking to, when, for how long, and where they are when they do. Schneier points out — as many have — that this is the tip of the iceberg, and lays out a set of government secrets that we need whistleblowers to disclose in order to grasp the full scope of the new, total surveillance state: 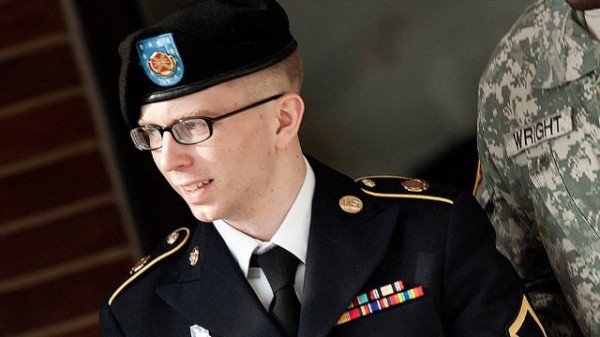 Freedom of the Press Foundation has begun publishing transcripts from the trial of accused Wikileaks source Bradley Manning.

What kind of phone data can the NSA collect exactly?

According to an explosive report in the Guardian on Wednesday, the National Security Agency (NSA) has been granted wide-ranging access to the call records of Verizon business customers. Under the arrangement described in court documents obtained by theGuardian, Verizon is required to hand over phone records for all calls made within the United States and calls originating domestically and reaching an international number. The Foreign Intelligence Surveillance Court — better known by its acronym, FISA — also ordered Verizon to hand over extensive metadata for the phone calls.

PRISM, trust and what we really want to believe

While the latest crop of reports on the PRISM program are more measured in tone than the sensational initial stories, in the end it?s down to us to decide who to believe. After all, when it comes to intelligence agencies, we?re never going to be given the full picture.

7 Anonymous Hackers Who Have Been Unmasked

Another member of the hacker collective Anonymous has been unmasked this week. In a letter posted Thursday on projectknightsec.com (a website run by Anonymous), Deric Lostutter, a 26-year-old from Winchester, Ky., revealed that he is a member of

Hackers affiliated with the Anonymous collective have leaked a US Department of Defense memo relating to the PRISM program, revealing that the National Security Agency has secretly gathered intelligence on millions of Americans for years

n response to the bombshell reports that the National Security Agency has been secretly amassing user information from Facebook and Google, hacker collective Anonymous has published what appears to be a trove of NSA documents. (It’s unclear if they’re

Facebook founder and CEO Mark Zuckerberg has posted an update on his Facebook page in response to the PRISM story in The Washington Post. The Post story says Facebook is one of nine Internet companies supplying the National Security Agency with data about its users. Zuckerberg attacked the Washington Post in his comments, calling the newspaper’s reporting “outrageous.”

In a rare public filing in the secret Foreign Intelligence Surveillance Court (FISC), the Justice Department today urged continued secrecy for a 2011 FISC opinion that found the National Security Agency’s surveillance under the FISA Amendments Act to be unconstitutional.  Significantly, the surveillance at issue was carried out under the same controversial legal authority that underlies the NSA?s recently-revealed PRISM program.

In response to the recent news reports about the National Security Agency’s surveillance program, President Barack Obama said today, “When it comes to telephone calls, nobody is listening to your telephone calls.” Instead, the government was just “sifting through this so-called metadata.” The Director of National Intelligence James Clapper made a similarcomment last night:  “The program does not allow the Government to listen in on anyone?s phone calls. The information acquired does not include the content of any communications or the identity of any subscriber.”

Google denies any involvement in the NSA’s secret PRISM program in a blog post. The post was published by Google CEO Larry Page and Google Chief Legal Officer David Drummond.

President Obama says PRISM ?does not apply to U.S. citizens? or people living the U.S.

One day after reports of PRISM surfaced ? a program which reportedly enables the U.S. government to tap directly into the central servers of U.S.-based Internet companies ? U.S. president Barack Obama has announced during a press conference that PRISM ?does not apply to U.S. citizens and it does not apply to people living the United States? (source:CNBC).

How the Politicization of Terrorism Has Fueled Domestic Surveillance 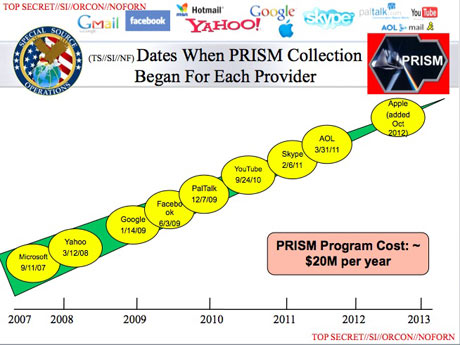 The hottest news item of the last 24 hours is the leak of a memo revealing a top secret NSA program called PRISM that allegedly gave the National Security Agency direct access to the systems of Google, Facebook, Skype, Microsoft, Apple, Yahoo, AOL, YouTube, and PalTalk. This comes a day after the same Guardian reporter, Glenn Greenwald, broke the story of a secret court order that ?requires Verizon on an ?ongoing, daily basis? to give the NSA information on all telephone calls in its systems, both within the US and between the US and other countries.?