Sarah Kendzior is a writer for Al Jazeera English. She has a PhD in cultural anthropology from Washington University and researches the political effects of digital media in the former USSR. You can find her work at sarahkendzior.com, and on Twitter: @sarahkendzior

Ryan Anderson:  First of all, thanks for doing this interview.  Let?s start off with the basics:  Why anthropology?  How and why did you end up in this field? 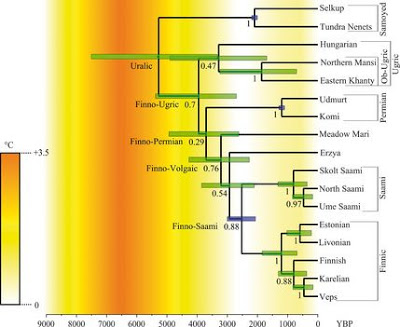 Earliest Evidence of Hunting by Human Ancestors Found in Kenya

Links between Mycenaeans and Scandinavia

Three papers on a similar theme. An excerpt from a source mentioned in the second paper:

The BBC discovers the Texas Germans ? and a dying dialect

My great-grandmother, Hedwig Nietzsche Koerth, never spoke English. My Grandpa Gustav didn’t learn the language until he entered first grade. But, by the time I was in grade school ? and was going through a brief fling of learning German ?

In the past five years, Twitter has become a mecca for social science researchers: the number of topics, informants, and networks waiting to be analyzed are limitless (here are some examples). With the help of a nifty program like Tweet Archivist, you could literally collect thousands of micro-narratives about people?s ideologies, behaviors, and relationships around a search query ? all from the comfort of your office. This was the utopian vision I had of Twitter research when I started designing my final project for theCultural Heritage Informatics (CHI) Fellowship at Michigan State University.

?It?s time for an apocalyptic journalism?

Robert Jensen teaches journalism at the University of Texas at Austin. He is also a self-described radical Christian and political activist. In an essay published today, Jensen is blunt about the fact that his beliefs would likely preclude him from ever being hired to run a traditional newsroom.

The AP is fine-tuning its social media guidelines for reporters, specifically on how to exercise caution while tweeting. Given the confusion and misinformation that spread around the Boston Marathon bombing story, not to mention its recent recent Twitter hacking, the news service wants its reporters to exercise extreme caution, saying ?Staffers are advised to avoid spreading unconfirmed rumors through tweets and posts.? More:

Source: Revealed…the face of a Maltese woman 5,600 years ago

Heritage Malta also launched a 3D virtual reconstruction of facial features based on one of the prehistoric skulls (over 5,000 years old) found at the Xaghra Stone Circle in Gozo. It revealed, for the very first time, what one of the earliest Maltese actually looked like.

It was a face which was much closer to what one would expect from a woman of our day and age rather than that of a person who lived on the islands over 5,000 years ago.

Does PCA Have Politics?

This morning, armchair scientist and noted fan of this blog, Razib Khan, decided it would be prudent to write about race. It comes by way of Khan issuing a corrective, of sorts, to Ta-Nehisi Coates.