Turkey, the US and the Syrian crisis

The United States? take on the Syrian crisis is not that different than its take on the Arab uprisings. 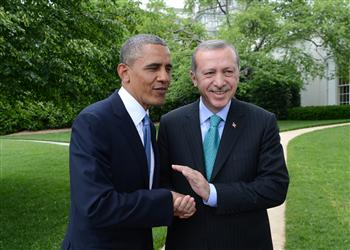 Can Obama Save Turkey From a Syrian Quagmire?

The war in Syria is spilling over into Turkey and threatening a decade of economic gains ? and Prime Minister Recep Tayyip Erdogan?s political future.

WASHINGTON (Reuters) – Turkish Prime Minister Tayyip Erdogan said on Thursday he saw a good opportunity for progress towards ending the division of Cyprus, a move that could further the exploitation of natural gas and oil in the eastern Mediterranean. The island has been divided since a Greek Cypriot coup was followed by a Turkish invasion of the north in 1974. Turkey keeps some 30,000 troops in

Turkey and the U.S. looking increasing pressure on Syria ahead of international conference

David Kashi — Medill News Service WASHINGTON, May 16 — With growing concern over Syria, Turkish Prime Minister Recep Erdogan meets with President Barack Obama at the White House to find a solution to the conflict that has been spilling over into Turkey

Barack Obama and Turkish prime minister Recep Erdogan skated over major differences on how to deal with the Syrian crisis after a lengthy meeting at the White House on Thursday.

Turkey and Intervention in Syria

When President Obama and Turkish Prime Minister Recep Tayyip Erdogan meet in Washington on May 16, a long list of topics will likely be on the table. The big question, however, is whether anything substantive comes from their discussions of Syria

No doubt about Turkey?s gold trade with Iran: US

Iran supports any action Turkey takes to protect its unity and solidarity, referring to the.

Needed: A Turkish-American Plan for Syria

The Wall Street Journal Europe (USA) 16 May 2013, p. 14 By Morton Abramowitz and Eric Edelman * When U.S. President Barack Obama hosts Turkish Prime Minister Recep Tayyip Erdogan at the White House today, their talks about Syria will have a fresh urgency. On Saturday, car bombings in the Turkish border town of Reyhanli

Russia must be convinced to ‘finish with Assad’: French President

Frençois Hollande said that Moscow should be convinced to drop its support for Bashar al-Assad. Russia said that Iran must take part in a second conference on Syria