The leak that prompted the seizure of a journalist phone records was a ‘very serious’ matter which ‘puts the American people at risk,’ Attorney General Eric Holder said.

Was the World Press Photo winner a fake? (And what’s a ‘fake’ photo, anyway?) 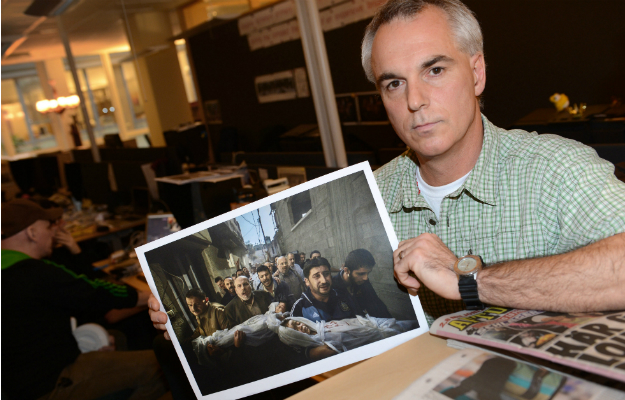 Paul Hansen’s image of a funeral procession in a Gazan alleyway on Nov. 20, 2012 is undeniably striking. Two men, their faces warped with grief and anger, carry the shrouded bodies of their young nieces, killed in an Israeli missile strike, while a crowd of men follow behind them. When it was selected as the winner of the 2013 World Press Photo contest in February, the chairman of the contest jury, Associated Press Vice President and Director of Photography Santiago Lyon, praised the photograph’s “incredible collection of powerful motifs of imagery, that when it all comes together makes for a really strong photograph.”

Today the Associated Press reported that the Department of Justice has collected the telephone calling records of many of its reporters and editors. By obtaining these records, the DOJ has struck a terrible blow against the freedom of the press and the ability of reporters to investigate and report the news. As James Madison understood, “a popular government without popular information or the means of acquiring it is but a prologue to a farce or tragedy, or perhaps both.” AP had it right when it told Attorney General Holder that it was “a serious interference with AP?s constitutional rights to gather and report the news.”

Breaking news: Conservative organizations suddenly have found common cause with one of their favorite objects of contempt ? the benighted Mainstream Media.

Source: Reporters without Borders From Dashed Hopes Follow Spring : After the ?Arab springs? and other protest movements that prompted many rises and falls in last year?s index, the 2013 Reporters Without Borders World Press Freedom Index marks a return to a more usual configuration. The ranking of most countries

What Big Data Means for Business

The evolution of a media giant, by The Huffington Post?s CEO Jimmy Maymann [Video]

The Next Web caught up with the Huffington Post?s CEO Jimmy Maymann for a chat a few weeks ago, when he discussed the upcoming Japan launch and becoming a global media brand.

But during TNW Conference Europe 2013, Maymann took to the stage to give more thoughts on the evolution of a media giant, and what?s next for The Huffington Post.

Twenty years ago today, the United Nations (UN) established World Press Freedom Day to raise awareness of press freedom and remind governments of their duties under Article 19 of the Universal Declaration of Human Rights. This year?s official celebration, sponsored by the UN, highlights what EFF has known for a long time: that free expression is an imperative for all media, from online newspapers to blogs to sites like Twitter and Facebook.

Verification and the crowd in Boston, and the Kochs? newspaper plans