The Turkish Finance Ministry has sped up its work to collect taxes from the online advertising market. 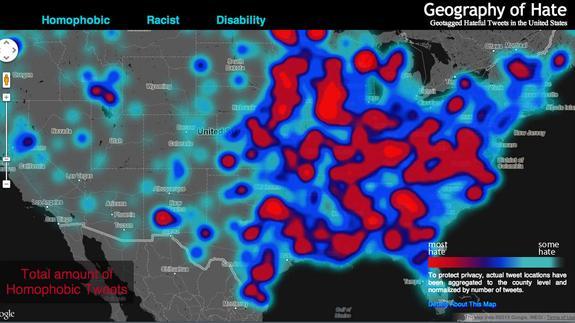 Twitter has the capacity to ignite revolutions and enable small acts of kindness, but there’s also a darker side to the microblogging network

Floating Sheep, a group of geography academics, created the “Geography of Hate,” which maps racist, homophobic and ableist tweets in the U.S

Reserchers Create “Hate Map” of the U.S. With Twitter Data

The same researchers previously mapped racist Tweets about President Obama. In both cases there?s reason to be a little skeptical.

When asked to come up with an example of a torrent site, most tech-savvy Internet users might cite a public and open site such as The Pirate Bay. However, thousands of file-sharers ? many of whom consider themselves to be experts ? might reference a private invite-only site like What.cd.

Pentagon report on Beijing?s military capabilities highlights that every resource is at the state?s disposal when it comes to espionage

The same researchers who mapped racist Tweets about President Obama have made a Tweet-based map of hate in the United States. But there?s reason to be a little skeptical.

Texting while driving has now replaced drunk driving as the number one cause of teenage deaths on the road in the U.S., new research has found.

Content marketing is a marketing technique of creating and distributing relevant and valuable content to attract, acquire, and engage a clearly defined and understood target audience ? with the objective of driving profitable customer action

3D printed guns and the law: will judges be able to think clearly about digital files when guns are involved?

My latest Guardian column is “3D printed guns are going to create big legal precedents,” and it looks at an underappreciated risk from 3D printed guns: that courts will be so freaked out by the idea of 3D printed guns that they’ll issue reactionary decisions that are bad for the health of the Internet and its users: