Footnotes on Jürgen Habermas lecture in Leuven about the European crisis 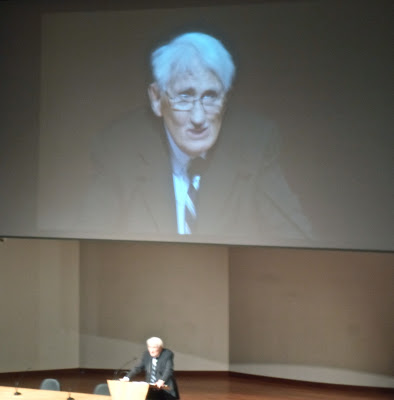 Mopping up after Sarkozy

from Blogactiv by Florian Pantazi

François Hollande, the French president, is currently back from a state visit to China. Hollande hopes to expand trade in Asia, as France?s current account deficit has reached 75 billion euros, a third of which is with the Middle Kingdom.

Source: Eurobarometer From the Introduction: This report examines the extent to which European citizens engage in participatory democracy, and the extent to

The different reactions to the ban on burqas and to the legalisation of same-sex marriage lay bare the hypocrisy of the French right.

A marginal impact of the ECB rate cut?

As expected the ECB announced it has cut its main interest rate by 0.25% to 0.5%. As we noted at length, this is likely to have little impact on the real economy. The real question remains whether it will announce any additional non-standard measures to help boost lending in the economy ? see here for our discussion of the many constraints on such action.

Italy’s new Prime Minister Enrico Letta and France’s President François Hollande advocated a stronger growth policy for Europe on Wednesday in Paris. At a meeting in Berlin prior to that, Letta and German Chancellor Angela Merkel had stressed that they would hold to the austerity course. Some commentators see the opinion spreading in Europe that austerity without growth impulses is the wrong way to go. Others warn against departing from a pure austerity policy.

Attack on the French Embassy in Tripoli: what now for Libya?

Foreign companies and investors already unsure about returning to Libya will be further dissuaded by this targeting of a foreign embassy in the heart of Tripoli.

The eurozone economy will shrink more than expected this year, with France sliding into recession, according to a gloomy European Commission report.

The ECB brought down its benchmark interest rate to a new record low of 0.5 percent on Thursday. The central bank’s head Mario Draghi justified the step as a measure against the persistent recession in crisis-hit countries. If they stick to the reform programmes the cheap money will help their economies recover, some commentators write in praise. Others believe that even massive intervention by the central banks won’t end the economic and financial crisis.

Pharma vs The European Medicines Agency ? the case of InterMune

Like AbbVie, described in my last post, a second American company, InterMune, has taken legal action to prevent or restrict the European Medicines Agency from disclosing certain clinical trial data after a medicine is approved for marketing.

German scepticism is the euro?s next big challenge (Opinion)

pThe arrival of the Alternative for Germany party will be primarily at the expense of the governing coalition and could even spell the end of Angelanbsp;Merkel’s chancellorship, writes Jouml;rg Forbrig./p

A collective howl of protest and despair will resound through Europe?s streets and squares on Wednesday at the annual May 1 rallies

NATO and the costs of star wars

Over the last decade, the US has spent tens of billions of dollars constructing a shield to stop nuclear missiles from North Korea or Iran reaching its soil. So far, the shield does not work. Fortunately for the Americans, neither Pyongyang nor Tehran has nuclear missiles that could hit the US. Unfortunately, however, America’s missile defence programme has upset China and Russia, two countries that do have nuclear arsenals that could reach its homeland. America’s European partners in NATO should try to convince Washington to scale back its missile defence ambitions for the next few years. Not only would this allow the US government to spend its shrinking defence budget on more pressing military needs. It would also improve European security by reducing tensions between NATO and Russia.

The ECB looks set to cut its main interest rate by 0.25% to 0.5% on Thursday (while keeping the deposit rate at 0% due to concerns about distortionary effects of negative rates).

Ireland and the 1973 Enlargement

As part of the Evolving Europe project, UACES asked participants at the 40 Years since the First Enlargement conference to respond to the question ?What have been the most significant changes in the 1973 accession states as a result of EU membership??

Following on from Thorsten Borring Olesen?s response in relation to Denmark,  Elaine Fahey (University of Amsterdam) and Kathryn Simpson (University of Kent) share their views on how EU membership has affected Ireland?

Does Enrico Letta’s newly formed government have what it takes to get Italy out of its dire situation, or is it nothing but a new layer of paint on the crumbling house of Italian politics?

Criticise it all you want, Germany is not going to drop austerity

Writing on his Telegraph blog, Open Europe Director Mats Persson argues that anyone who prays for Germany to U-turn on its eurozone policy after the September election will probably be left sorely disappointed.

Italy’s new prime minister Enrico Letta stressed during his first policy statement on Monday that his country needed measures that stimulate growth instead of just austerity policy. At the same he announced the scrapping of the property tax and institutional reforms. Some commentators believe that by vetoing the rigid austerity course Letta can be the trailblazer for the crisis-hit countries. Others say the opposition from Berlin and Brussels won’t allow this.

UK surveillance law: a warning, and a call for a different future

The British are being tracked, more than we have ever been. A new report sets out what this means for the everyday citizen, and calls for more targeted, more accountable surveillance laws.

The link between immigration policy, labour markets and exploitation in the UK

The UK government?s commitment to tackling trafficking for labour exploitation is being undermined by its immigration and labour market policies.