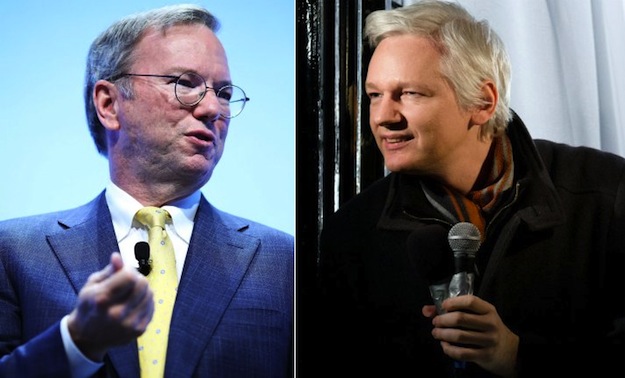 Back in 2011, Google executive Eric Schmidt conducted a secret interview with Julian Assange while the WikiLeaks founder was under house arrest in Britain. The nature of the interview has not been revealed until now, a week before the release of Schmidt’s new book The New Digital Age. In the book, obtained by Foreign Policy, Schmidt and Assange discuss a range of issues related to secrecy and the free flow of information. But one particular exchange chips away at one of Assange’s core beliefs about protecting government informants from violent reprisal.

from EFF.org Updates by Dave Maass and Mark M. Jaycox

Today, Internet freedom advocates everywhere turned their eyes to the U.S. House of Representatives as that legislative body considered the Cyber Intelligence Sharing and Protection Act.

Source: AV-Test Institute (Germany) It took the AV-TEST Institute …a total of 18 months to carry out a study that would confirm its initial suspicion, namely that the best-known search engines Google and Bing are being used to include websites containing malware among the top search results delivered to users. This exploitation

Source: arXiv.org From Abstract: Background: The web has become a primary information resource about illnesses and treatments for both medical and non-medical users. Standard web search is by far the most common interface for such information. It is therefore of interest to find out how well web search engines work for

This is a group post from a session held at the Big Data: Rewards and Risks for the Social Sciences conference in March (http://www.oii.ox.ac.uk/events/?id=557). Participants in the group were Chris Birchall, Michael Khoo, Cornelius Puschmann, Kalpana Shankar, Jillian Wallis, Janet Smart, Melissa Terras and Linnet Taylor. This is an account of the

If you walk into the lobby of the data center Facebook operates in the high desert in Prineville, Oregon, you’ll find a flatscreen display on the wall where you can check the pulse of this massive computing facility.

from The Next Web by Martha Pierce

The world according to Google: 5 crazy predictions from Eric Schmidt and Jared Cohen’s new book

Is Bitcoin Social or is Social Bitcoin: The Cryptocurrencies Interdependency

Social media certainly inspires a mob mentality and in the case of any form of investment of this nature, sentiment and confidence matter a lot. Outside factors aside from social media certainly affect Bitcoin prices (i.e. hacking, MTGox?s reliability and security issues). However, social media reflects this on a hyper level, creating both ups and downs at a super-fast rate.

As Amazon reportedly opens a Moscow office, what competition does it face in Russia?

from The Next Web by East-West Digital News

Angel investors and venture capitalists are putting money into the only thing riskier than Bitcoin: Bitcoin companies.

from Stanford Center for Internet and Society by Richard Forno

As expected, CISPA 2.0 passed the House of Representatives yesterday and the various privacy protections sought through amendments were dropped.  Although much has and will continue to be written about the merits (or lack thereof) of the bill — especially its infamous “notwithstanding any other provision of law” clause — I think this also provides opportunity to comment more generally upon the nature of modern American lawmakingpertaining to cybersecurity. Read more » about CISPA 2.0 Clears The House: Outcome Hazy

The Zero Knowledge Foundation’s explainer on privacy policies is a pretty good introduction to where the fine-print on the sites you read comes from, and the surprisingly meaningful differences between different privacy policies on different sites. It’s easy to assume (as I usually do) that the average privacy policy says, “You have no privacy,” but there’s a lot of difference between the policies on Craigslist, Facebook and Twitter, say.