A total of 657,000 of trees will be cut down for Istanbul?s third airport construction, according to a report.

Istanbul is hosting the first Russian Culture Festival, starting from today. The festival will be opened with an unforgettable show by the world-renowned Russian folk dances group, Igor Moiseyev State Academic Ensemble. The group will take the stage

Deputy Prime Minister Ali Babacan announces that the government?s ?crazy? canal project for Istanbul was signed by the Higher Planning Committee this week.

Internet in Europe, Asia and Africa will be managed from Istanbul, Turkey?s transportation minister has said. 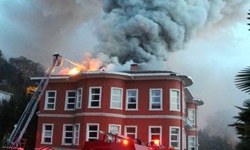 A fire broke out in a historic mansion which hosts Turkish Foreign Ministry?s occasional meetings

We are watching İstanbul being destroyed

Fishermen in İstanbul watch a bridge under construction over the Golden Horn, seen as a major blow to İstanbul’s traditional silhouette, including Mimar Sinan’s

The number of countries being represented at the Eurasian Economic Summit inIstanbul is increasing every year. The reputation the Marmara Group Foundation has established in the last 16 years has carried the organization and Turkey beyond the

Art lovers get ready for AllArts fair in Istanbul

Taking place at the Istanbul Congress Center, All Arts Istanbul will offer a comprehensive range of art work with approximately 140 participants. Visitors will have a chance to become involved as numerous artists and local artisan workers will be

Istanbul to prepare for ArtInternational

Bringing together leading international and local galleries, the new modern and contemporary art fair in Istanbul offers collectors unrivalled access to exciting new art from Turkey, the Middle East and beyond. Drawing on its unique geographic location

Yet! Enough of this Tulip imagery anf Bosporus like center looks like a twisting person. The font for the name is OK, except the Upper case i needs work. It is weak.

Istanbul?s aim to be region?s financial center has been consolidated with the opening of new stock exchange entity.

from NYT > Turkey by By D.D. GUTTENPLAN

Istanbul Immersion Week is organized by the Global Network for Advanced Management, a group of 22 business schools that share research, teaching materials and students.

“Istanbul 2020 is delighted that Istanbul’s fifth bid to host one games on two continents, for the first time ever in Turkey, has not only captured the world’s attention, but has drawn upon the passion of our sports-loving nation,” bid chairman Hasan

As Tulips and Judas Trees are symbols of Turkey’s giant city of Istanbul since Ottoman period, metropolis’ Chief of Parks Department says that they tried to keep this image alive by planting these flowers in almost all parks and picnic areas

A $1.4bn tunnel project connecting the European and Asian sides of Istanbul is set to get underway as the project achieved its financial close. The 5.4km Avrasya Tuneli project will see a 5.4km-long tunnel built under the Bosporus Strait with a view to

The house where Russian revolutionary leader Leon Trotsky lived in exile from 1929 to 1933, located on Büyükada, the largest of the high-toned Princes Islands a few miles off Istanbul’s shore, could be converted into a museum, according Istanbul

from NYT > Turkey by By SUSANNE FOWLER

This property fits right in among the new wine bars and galleries that have been popping up in the area.

The missing person story dominated the headlines in New York, and blanketed the news in Istanbul. This is the Facebook picture all the news sites ran when she went missing. Sierra looked very much the focused, hopeful traveler, perhaps gazing upon one

Why Istanbul Is The World’s Best Layover Destination

If you believe the hype coming from Turkish Airlines, which now flies roughly 40 million passengers to 220 cities in 98 countries, Istanbul will soon become the world’s most connected and wonderful international hub, an axle around which global