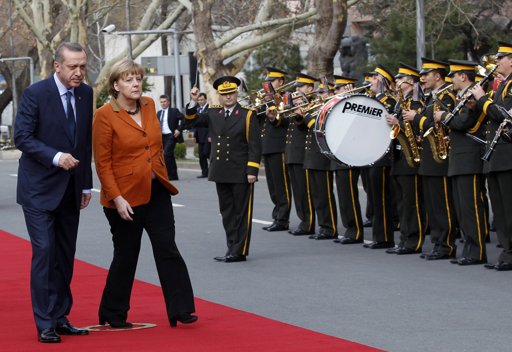 from Yahoo news
ANKARA, Turkey (AP) ? German Chancellor Angela Merkel said Monday the European Union should move forward with its talks with Turkey about joining the bloc, but that she remains skeptical about the nation becoming a full member.

from NYT > Turkey by By MELISSA EDDY;
Chancellor Angela Merkel of Germany has called for talks between Turkey and the European Union amid signals of decreasing resistance from her center-right party.

What if Turkey surprises Merkel and Hollande with a Cyprus move?

from Hurriyet Daily News
There is no reason what so ever for German Prime Minister Angela Merkel..

Erdoğan and Merkel agree to disagree

from Hurriyet Daily News
Following hours of talks in Ankara, it became apparent in the joint press conference that German Chancellor Angela..

from Yahoo news
ANKARA (Reuters) – German Chancellor Angela Merkel said on Monday she was in favor of reviving Turkey’s stalled talks on its relationship with the European Union but a dispute over the divided island of Cyprus remained a stumbling block. Speaking during a two-day visit to Turkey, Merkel, who favors a “privileged partnership” for Turkey in place of full EU membership, said it would be right to