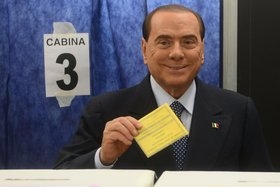 from Hurriyet Daily News
Leftist supporters in Italy settled in for a tense wait at campaign headquarters..

from FT.com – World, Europe
Just as politics seemed to be going in the eurozone?s favour, Italians have refused to bow to Europe?s demands. But their discontent is also aimed at the Italian political system

Shocker in Italy: A comedian-cum-politician wins twice as many seats as the ‘Brussels candidate’

by Open Europe blog team
So we now have a pretty good idea of the election results in Italy. And there are two victims: eurozone stability and Mario Monti. 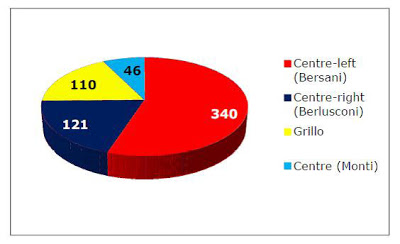 from euro|topics
The centre-left alliance led by Pier Luigi Bersani has won Italy’s parliamentary election by a razor-thin margin against Berlusconi’s camp. But both Berlusconi and comedian Beppe Grillo’s protest movement will be able to block Bersani’s policies in the Senate. The jittery Italians have voted against Europe and turned the country into an unpredictable partner, commentators criticise, putting their hopes in new elections.

Elections in Italy are always spread over two days. Yesterday, about 55% of Italians cast their vote – marking a sharp 7.4% decline in turnout compared to the first day of the previous general elections in 2008. Turnout was generally much higher in the North than in the South of the country.

from euro|topics
The conservative Nikos Anastasiades will be Cyprus’s next president. Anastasiades, who campaigned on an austerity platform, won against the leftist candidate Stavros Malas in a runoff vote on Sunday, securing 57.5 percent of the vote. Some commentators are delighted that the new president will tackle overdue reforms in the highly-indebted country. Others fear he will submit to foreign demands regarding both the austerity policy and the Cyprus dispute.

from Hurriyet Daily News
Nicos Anastasiades who won Sunday’s presidential election in Greek Cyprus, vowed to work for an ‘European solution’ after his victory.

The rise of Europe’s far-right voices

from AL JAZEERA ENGLISH (IN DEPTH)
Assessing key nationalist political parties across the continent, including Italy, which is voting for a new parliament.

from Hurriyet Daily News
Three topless feminists lunged at Italy’s Silvio Berlusconi as he arrived at a polling..

from Global Voices Online by Filip Stojanovski
Vanco Dzambaski published a photo gallery from the gathering that took place on February 16 in the center of Skopje, commemorating the February Campaign of 1944, when Macedonian partisans marched through the snowy mountains to deal a decisive blow to the fascist forces in Macedonia and Northern Greece. World War II veterans and their supporters [mk] protested against the forced neglect of the Allied Forces? achievements (which include the founding of the Macedonian state), and the continuous harassment of the veterans? organization by the current government at all levels.

from Global Voices Online by Ruslan Trad
On Sunday, February 24, 2013 tens of thousands of Bulgarians protested against corruption, high utility bills and poverty. The coastal city of Varna was declared the Protest Capital: over 40,000 people turned up for the Sunday’s rally there. Some 15,000 people protested in Plovdiv. While it is difficult to determine the exact number of the February 24 protesters, activist sources say there were more than 200,000 of them nationwide.

Why has Romania got such a bad public image?

ID requirements in the UK, and migration within the EU

from open Democracy News Analysis – by Lapo Pistelli and Nathalie Tocci
More coordination and strategy are needed in Europe’s response to the sinister signs of stolen revolution. The political-strategic impulse has come from the south in the past. In the current economic crisis this should be more the case, not less.

Where is the UK’s growth coming from?

from open Democracy News Analysis – by Rachel Graham
A Public and Commercial Services Union report on wages and growth in the UK highlights a problem the Coalition have studiously avoided: with job losses and wage cuts, how exactly is the economy to grow? Public sector income is private sector demand.

from FT.com – World, Europe
With recession into its third year and Lisbon now set for an extension on deficit targets, anger is growing at tightening austerity measures

by Open Europe blog team
Update 18:32: the projections for the Lower House are starting to come in and it’ll be a close one. The first RAI projection has Bersani’s centre-left coalition on 29.1%, Berlusconi’s coalition on 28.6% and Beppe Grillo going even stronger than in the Senate, at 26.3%. Again, the Five Star Movement – the party that has toyed with pretty clear enti-euro rhetoric – is set to become Italy’s largest single political party (don’t say we didn’t warn you). 18 to 24 year olds are allowed to vote in the Lower House elections, whilst 25 is the threshold for the Senate elections, which possibly explains the additional Grillo bounce.

Do the Cypriot elections pave a clear path to a Cypriot bailout?

by Open Europe blog team
How big of a problem can a country accounting for 0.2% of eurozone GDP possibly be? Well, potentially pretty big it seems.

from AL JAZEERA ENGLISH (IN DEPTH)
Unions question the wisdom of austerity as unemployment grows and a contracting economy means less tax revenue.

Dreaming of a different Scotland: alt independence and alt unionism

from open Democracy News Analysis – by Gerry Hassan
It isn’t enough that we aren’t Thatcherites and free-marketeers, visions of the sort of Scotland we want to build must escape the confines of current conservatism and move beyond oppositional formulations. Scotland must be a positive proposition.