Declan McCullagh writes at CNET News: “State prosecutors who investigated the late Aaron Swartz had planned to let him off with a stern warning, but federal prosecutor Carmen Ortiz took over and chose to make an example of the Internet activist, according to a report in Massachusetts Lawyers Weekly.” 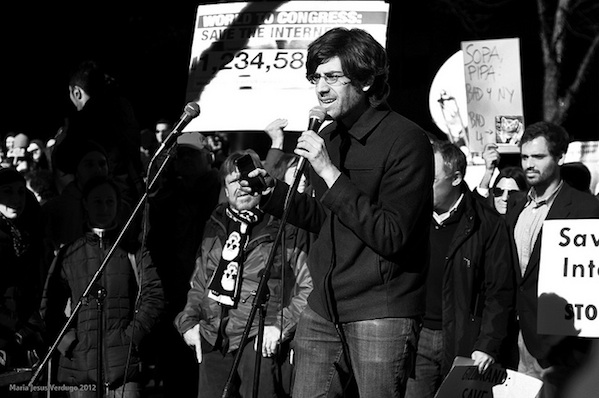 from Boing Boing by Jesse Brown

Clay Shirky: “Remembering Aaron by taking care of each other”

from Boing Boing by Xeni Jardin
Author and NYU professor Clay Shirky writes about one of the imperatives he believes the death of Aaron Swartz should bring to life: “We need to take care of the people in our community who are depressed,” he writes.

Aaron Swartz: A Fighter Against the Privatization of Knowledge

Lessig: “A Time For Silence,” for Aaron Swartz

from EFF.org Updates by Cindy Cohn and Marcia Hofmann
In our first post, we presented some initial thinking about how to fix the Computer Fraud and Abuse Act (CFAA) and wire fraud law in light of the tragic prosecution of Aaron Swartz.

Congresswoman: ?Aaron?s Law? to Honor Aaron Swartz Is Only the Beginning

Archaeology, Open Access, and the Passing of Aaron Swartz

from Digging Digitally by Eric Kansa
I don?t post to this blog as much as I used to, but every once in a while there are some developments in the world of data sharing and scholarly communications that I think worthwhile discussing with respect to archaeology. This blog post is an attempt to gather my thoughts on the issue of Open Access in advance of a forum on the subject that will be held at the Society for American Archaeology?s (SAA) annual meeting in Honolulu in April.

from Savage Minds: Notes and Queries in Anthropology ? A Group Blog by Rex
The death of Aaron Swartz marks the end of an era ? an era that had been slowly fading away until his passing gave it a terrible, sudden finality.