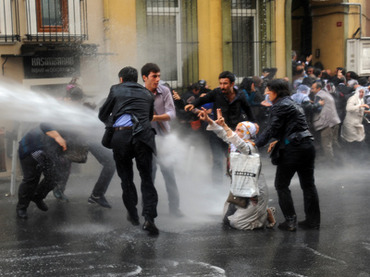 A woman is helped by demonstrators as Turkish riot police fire water cannon and tear gas during a Kurdish demonstration in support of a widespread hunger strike by Kurdish prisoners, on November 4, 2012 in Istanbul (AFP Photo / Bulent Kilic) VIA

from Global Voices Online by Ruwayda Mustafah Rabar
Kurdish political prisoners have reached their 55th day of hunger strike. There are hundreds of political prisoners on hunger strike in Turkey, and this has led to solidarity protests throughout Europe, and in particular within Turkey. Earlier yesterday [November 4, 2012], the mothers of some of the political prisoners staged a sit-in, and were met with tear-gas, as well as water canisters was sprayed directly on them. Turkish mainstream media and governmental ministers remain oblivious to unfolding anger by Kurdish people, and their disregard for a political settlement of Turkey’s Kurdish question has made the situation worse.

from AL JAZEERA ENGLISH (IN DEPTH)
Nearly 700 prisoners demanding greater recognition for Kurds in Turkey have refused food, some for nearly two months.

from Yahoo news
A record number of journalists are behind bars in Turkey as the government of Prime Minister Recep Tayyip Erdogan wields draconian laws critics say are creating a climate of fear to silence dissenting voices and promote “pro-state” journalism.

No progress on hunger strikes

Purge of the Kurds, the dark side of Turkish ?democracy?

from open Democracy News Analysis – by Rozh Ahmad
Despite the initial reforms announced by the government towards the recognition of Kurdish rights, journalist Rozh Ahmad reports on the systematic persecution of Kurdish people in Turkey.