We do not cry for the deaths of ?terrorists,? says Turkish PM 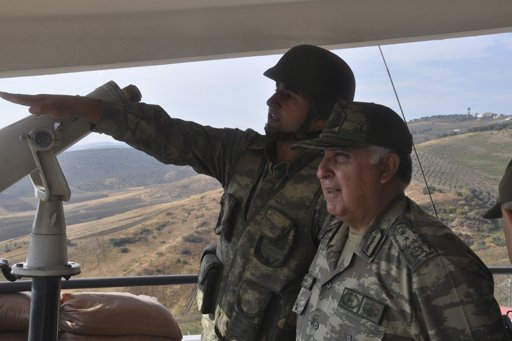 from Bianet :: English
The newly appointed police chief in the southeastern province of Diyarbakır voiced unusual and poignant remarks about the Kurdish issue. Critics expressed hope that the sentiments he voiced will translate into action but struck a cautious note as he still remains an agent of the Turkish state.

Syria and Turkey: how long can the world’s great powers sit on their hands? | Simon Tisdall

from World news: Turkey | guardian.co.uk by Simon Tisdall
The do-nothing hand-wringing favoured by Turkey’s allies may not be politically sustainable as the Syrian crisis spreads
Syria’s lethal shelling of a Turkish town, the latest and most serious of a string of cross-border incidents this year, has put the international community on the spot. How much longer can the US, Nato, the UN security council, the EU and major non-western actors such as Russia and China keep the expanding Syrian crisis at arm’s length, variously denouncing and abetting the Assad regime, squabbling between themselves, but doing next to nothing?

In a 2010 book, Korkut Ozal, the late president’s brother, pointed the finger at Ergenekon, a shadowy ultranationalist network with alleged links to the military, which has been accused of working to overthrow successive elected governments.

from Hurriyet Daily News
The grave of Turkey?s eighth president, Turgut Özal, was opened yesterday for an autopsy following long discussions and controversy over his death.

from Hurriyet Daily News
The opposition must help draft a charter by year?s end or the AKP will set off alone, Erdoğan says, calling the presidential vote the most of three polls in three years

Why Erdogan is politically lazy

from Journalist in Turkey, background articles, news and weblog about by Fréderike Geerdink
Ten years of AKP rule. Turkey has indisputably changed. Erdogan talked about that extensively in his speech to the fourth AKP congress yesterday. The economy had stabilized and grew despite global economic problems, the power of the army had been limited, steps had been taken towards reconciliation with the Kurds. All history. No great visions

Leaders of the region meet at AKP congress

from Hurriyet Daily News
Prominent political figures from the Middle East, as well as other international figures, were in Ankara yesterday to attend the convention of the ruling Justice and Development Party (AKP)

from Hurriyet Daily News
It is risky to write before ?the big event? of the ruling Justice and Development Party (AKP) Congress, but I

from Yahoo news
Tayyip Erdogan, Turkey’s prime minister, said Sunday that Turkey’s successful democracy should serve as an example to all Muslim countries. Critics say Erdogan is too authoritarian and stifles dissent.

from Today’s Zaman, your gateway to Turkish daily news :: Columnists by BÜLENT KENEŞ
The ruling Justice and Development Party (AKP) held its congress on Sunday in its 10th year in power.

10 years in power: the AKP as ?perception changer’

from Today’s Zaman, your gateway to Turkish daily news :: Columnists by EMRE USLU
After 10 years in power, the justice and Development Party (AKP) government has entered a new direction.

from Today’s Zaman, your gateway to Turkish daily news :: Columnists by MARKAR ESAYAN
When the ruling Justice and Development Party (AK Party) began its Kurdish initiative in 2010, it, along with the government’s Armenian and Cyprus initiatives, was perceived as a decisive move to remove the trump cards from Turkey’s ages-old deep state, which recently came to be known as Ergenekon — a clandestine organization nested within the state trying to overthrow or manipulate the democratically elected government.

from Yahoo news
ANKARA (Reuters) – Prime Minister Tayyip Erdogan trumpeted Turkey’s credentials as a rising democratic power on Sunday, saying his Islamist-rooted ruling party had become an example to the Muslim world after a decade in charge. Addressing thousands of party members and regional leaders at a congress of his Justice and Development (AK) Party, Erdogan said the era of military coups in the nation ..