Merkel caught in the middle between the Bundesbank and the ECB

In her traditional news conference following the summer recess, German Chancellor Angela Merkel walked a fine line in questions about the eurozone crisis, having to maintain a delicate balancing act with regards to different elements within her governing coalition.

by EU-Digest
In a bold statement on national television, French President Francois Hollande declared that he would turn around the currently moribund domestic economy in the next two years, with a ?30 billion austerity plan as part of his remedy to combat criticism that the socialist leader has been too conservative.  The plan comprises of a inflation adjusted savings of ?10 billion from holding down state spending next year, albeit in nominal terms, excluding state pensions and the cost of servicing debt.  The remaining ?20 billion will be raised purely from tax rises, with the wealthiest individuals and companies to be targeted, leaving in place the controversial 75% on incomes that exceed ?1 million that has prompted France?s richest man, Bernard Arnault, to announce that he seeking dual Belgian citizenship to avoid paying the tax.

from open Democracy News Analysis – by Luke Dale-Harris
Politicians exist within a democracy and can be voted out. The Romanian Orthodox Church on the other hand does not, and this entrenchment of its power and reach creates an inalienable authority.

from open Democracy News Analysis – by Joan Subirats
If the answer is independence, what was the question? Does is really make sense to demand sovereignty at a time when no-one knows where to find it?

from The European Citizen by Eurocentric
The Socialists and Democrats Group in the European Parliament have launched their Relaunching Europewebsite. The initiative is about creating an alternative to the current policies and direction of Europe, and it invites people to submits ideas and questions. Hannes Swoboda, the leader of the S&D group, was in Hamburg recently for a talk that produced this video for the launch of the site:

A few questions for Relaunching Europe

from The European Citizen by Eurocentric
The S&D Group have set up their Relaunching Europe initiative, asking for opinions and questions about Europe and their policies, so I thought I’d ask a few questions.

1. It’s a good idea for Europarties and the groups in the European Parliament to reach out to citizens and include them in the European debate. Will there be many Relaunching Europe events outside of Brussels?

Separatism in the eurocrisis era

One should give some credit to the Spanish government for its determination in trying to make bailouts look like something else. Today’sEl País reports that Spain is planning to request that the unused money from the ?100 billion bank bailout package agreed with the Eurogroup a couple of months ago be used to buy Spanish bonds on the primary market.

from open Democracy News Analysis – by Andres Ortega
The huge demonstration on September 11, the national day of Catalonia, in Barcelona, under the banner of ?Catalonia, a State of Europe?, has changed the stakes.

from euro|topics
The Parisian satirical weekly Charlie Hebdo once again published Mohammed caricatures on Tuesday. In France and the US in particular, there are fears that this could further stoke anti-Western sentiment in predominantly Muslim countries. While some commentators accuse the magazine of acting irresponsibly and being driven by greed, others warn that the West should not exercise self-censorship out of fear of religious fundamentalism.

With budgetary discipline the only game in town in the eurozone, it must have been a bit of an awkward moment at the ECB when they realised that the bank’s new Frankfurt headquarters (pictured), currently under construction and due to be completed in 2014, will come in significantly over budget.

from The European Citizen by Eurocentric
European legislation is not famed for its speed. The EU’s institutional triangle of the Commission, Member States in the Council, and the European Parliament means that agreement has to be made both within and between these institutions before draft laws can be passed (where the Parliament is a co-legislator with the Council).

The Dutch elections and the Eurosceptic paradox

from open Democracy News Analysis – by Cas Mudde
Despite alarming predictions, last week’s Dutch election results turned out to be anticlimactic, as voters placed their confidence in the two mainstream, moderate parties. But Brussels shouldn’t celebrate too soon, as the “European weather vane” shows signs of bigger challenges to come.

Views from Italy of another Europe

from open Democracy News Analysis – by Sergio Andreis
From the conference, ?Out of the crisis with another Europe?, held on July 9,  2012 by the Green European Federation with the support of Sbilanciamoci! , a summary of Italian perspectives on the EU debt crisis and proposals suggested by sections of Italian civil society to overcome the crisis.

from BBC News | Europe | World Edition
Greek Prime Minister Antonis Samaras reiterates his belief that exiting the euro would be a “catastrophe” for his country, and calls for more time to make cuts.

Do the Germans and French still believe in Europe? 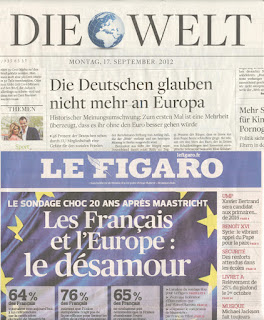 The front page of today’s Die Welt reads “Germans no longer believe in Europe”. According to a TNS Emnid poll carried out in July in Germany, France and Poland on behalf of the Bertelsmann Foundation, support for the EU and the euro has hit an all-time low with 49% of Germans saying they believe they would personally be “better off” without the EU, with only 32% saying that they would be “worse off”. By contrast only 34% of French and 28% of Poles said they would be better off without the EU.

Is Europe?s Financial Crisis Over?

from Project Syndicate by Gene Frieda
With the ECB taking on the characteristics of a lender of last resort, the eurozone’s acute crisis is over for now. But the existential challenge ? political agreement on the key elements of banking and fiscal union ? is only just beginning, and, unless it is met, the eurozone?s financial disintegration will eventually resume.

Separatism in times of crisis in Spain: the search for a future

from open Democracy News Analysis – by Jordi Vaquer
Civil society organisations in Catalonia have generated a feel-good and positive project, purging traditional pro-independence of its most strident anti-Spanish elements.
On September 11, 2012, Barcelona was overcome by what was probably its largest political rally ever, an exceptional event even for a city which has become used to massive, peaceful protest in the last decade. On the occasion of the national day of Catalonia, hundreds of thousands (estimates vary between 600,000 and 1.5 million) of demonstrators from all corners of Catalonia marched under the unequivocal slogan ?Catalonia, a new state in Europe?. The massive demonstration marks a turning point in Catalan politics, where the issue of independence has become, at least for the duration, an unavoidable point of reference.

by Centre for European Reform
Today’s EU faces retreat on several fronts. One is a possible break-up of the euro with unknowable consequences for the single market and the Union itself. Another is the apparent decay of the rule of law, democracy or media freedoms in certain member-states. Bulgaria, the Czech Republic, Hungary, Lithuania, Romania and Slovakia all show some symptoms of the latter, according to Freedom House, an NGO watchdog for democracy and civil liberties worldwide.

Germany is a country far removed from its stereotype

from World news: Turkey | guardian.co.uk by Louise Osborne, Kate Connolly
From sexual liberation in the east to tight-fisted ranchiness in the south, Germany’s many characteristics defy single definition
Southerners are tight-fisted but raunchy, provincials are easier to please, easterners are sexually liberated and Berliners are hard to shock.

French Politics: Europe: French Divergences Over the Future of Europe

from Bloggingportal.eu – Today’s posts
In an important article, Mediapart reveals that there are serious divergences within the French government over the future of Europe. Angela Merkel wants to work toward a closer political union, with greater central control over national budgets. She…

from AL JAZEERA ENGLISH (IN DEPTH)
The troika demands a $16bn reduction in public spending, three times the size of cuts which triggered riots in February.