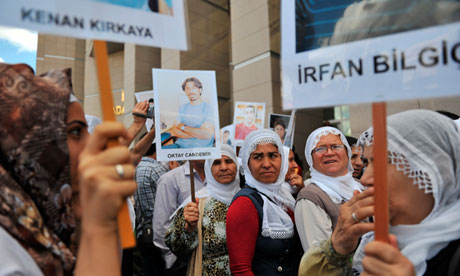 from World news: Turkey | guardian.co.uk by Constanze Letsch, Luke Harding
Human rights groups say country’s biggest ever media trial is attempt to intimidate press
The biggest media trial in Turkey’s history has begun in what human rights groups say is an attempt by the government to intimidate the press and punish pro-Kurdish activists.
A total of 44 Kurdish journalists appeared in court in Istanbul on various terrorism charges, including accusations that they have supported the KCK, an illegal pan-Kurdish movement that includes the PKK, the armed Kurdistan Workers’ party. Of those, 36 have been in pre-trial detention since December.

from Journalist in Turkey, background articles, news and weblog about by Fréderike Geerdink
ISTANBUL ? In the Turkish city of Istanbul the trial of 44 journalists working for Kurdish media has started. They are accused of ?membership of an illegal organization?. The journalists were detained last December and 35 of them have been in jail ever since. They are being tried in the so-called ?KCK trials?, in which

Journalists on trial for alleged links to KCK

from Hurriyet Daily News
Some 44 people, many of them journalists, went on trial in Istanbul?s Çağlayan 14th High Criminal Court yesterday for having alleged links to

from Yahoo news
Forty-four pro-Kurdish journalists have gone on trial in Turkey, charged with belonging to an armed rebellion in the country’s largest media case, intensifying concerns about press and political freedoms.

from Hurriyet Daily News
A regular bookcase in a regular Turkish home may have long contained illegal publications, according to an informatory list

from Hurriyet Daily News
In the ?advanced democracy? of Recep Tayyip Erdoğan and his very special Chief of General Staff Gen. Necdet Özel.

Doomed to Disappear? Religious Minorities in Turkey
Washington Times
Consider the following US diplomatic cable published by Wikileaks regarding an anti-missionary sermon sent to every mosque in the country by the Directorate of Religious Affairs, proof that American officials have long been aware of the Turkey’s

Time Ticking for Unresolved Murders and Disappearances of the 1990s

from Bianet :: English
Emma Sinclair-Webb from the Human Rights Watch (HRW) cautioned that the statute of limitations would begin to apply to cases of unresolved murders and disappearances that took place in the 1990s within three years, while speaking at a meeting in Istanbul.

The Scientific and Technological Research Council of Turkey (TÜBİTAK) finally released its expert report on the computers of three suspects standing trial in the Oda TV case. The report, however, proved to be just as enigmatic as it had remained elusive for the seven months that it took to prepare it.

Mobbing cases on the rise

Teacher sentenced to prison for likening Turkish PM to Hitler

?The State is Feeling the Waters to Censure Social Media?

from Bianet :: English
Transport, Maritime Affairs and Communications Minister Binali Yıldırım referred to social media a ?threat? that needs to be contained. Minister Yıldırım later denied allegations that they were working on measures to censure social media, but Dr. Özgür Uçkan from Istanbul?s Bilgi University expressed doubt about his statement.