from Hurriyet Daily News
Petraeus arrived in Istanbul’s Atatürk Airport with his private plane, according to an exclusive report by Turkish daily newspaper Akşam.

CIA chief in Istanbul for talks on Syria and terrorism 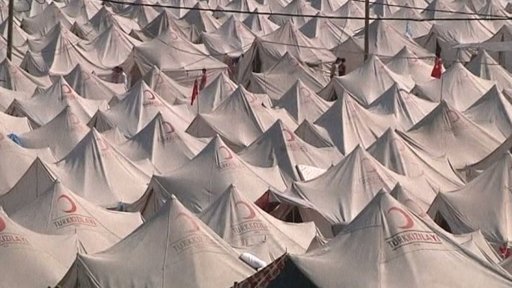 This sprawling camp in Turkey is home to Syrian refugees fleeing the bloodshed in their native land.
But havens like this one are filling up – fast.
Five thousand Syrians are crossing into Turkey every day.
That has forced Ankara to open four more camps capable of handling up to 120,000 people.
Turkey also wants to set up “safe zones” inside Syria to stem the flow – but other countries have shown little appetite for the plan because it would mean enforcing a ‘no-fly-zone’ to protect civilians.
Ankara marked International Peace Day on Saturday – but that gave little consolation to refugees.
“We are dying. Our children are dying,” says this man. “What peace are they talking about?”

Since fighting began 17 months ago, the U.N. believes hundreds of thousands of people have fled the country, while aid agencies say another 2.5 million face dramatically worsening living conditions inside Syria.

from open Democracy News Analysis – by Bill Park
The middle-east?s power-balance is in flux amid state tensions and political conflicts. In a two-part article, Bill Park – who was recently in Ankara and Erbil – examines the impact of these changes on Turkey and its neighbours, especially the Kurdish Regional Government (KRG) of northern Iraq. In part one, he looks at the Iraqi dimension; in part two, at Syria?s conflict and the wider Kurdish question.

from Hurriyet Daily News
The Free Syrian Army has removed “Hatay, Turkey” as the location

9 detained in SE Turkey on suspicion of spying for Iran

from Hurriyet Daily News
Nine people, arrested on claims of aiding Iranian spies in the eastern province of Iğdır, have been taken to the neighboring province of Erzurum and sent to the city?s courthouse.

from Hurriyet Daily News
As an academic who has a lot of words to say on politics and history, it must have been difficult for Turkish Foreign Minister Ahmet Davutoğlu

The opposition militants battling Syrian President Bashar al-Assad are a fragmented rabble that refuses to follow orders, according to activists

from Today’s Zaman, your gateway to Turkish daily news :: Turkish Pre by KORAY ÇALIŞKAN
Some ignorant people in Turkey feed on myths surrounding the Syrian crisis. Let?s take a look at them. The first is ?Alevis are oppressing Sunnis.?