from Hurriyet Daily News
Turkish PM Erdoğan responded harshly to a series of questions regarding issues concerning the appointment of teachers, the recent education reforms, and the pro-Kurdish Peace and Democracy Party. 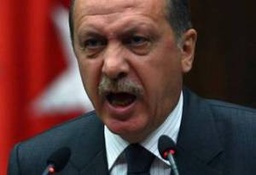 Erdoğan boldly continues on his way, but will Kılıçdaroğlu?

from Today’s Zaman, your gateway to Turkish daily news :: Columnists by YAVUZ BAYDAR
Turkey’s volatile and vulnerable political agenda once more stands ready to be confronted, and most of its color will be defined by two main rivals, as the ?summer that everyone wants to forget? is finally over.

from Today’s Zaman, your gateway to Turkish daily news :: Columnists by MARKAR ESAYAN
The Kurdistan Workers’ Party (PKK) issue, I believe, is taking an entirely different course. The relevant actors want it to be so. There is a broad coalition under the leadership of the PKK which stands strong vis-à-vis the Justice and Development Party (AK Party). It is further obvious that the AK Party has been unable to benefit from constructive and positive environment of its first two consecutive terms effectively and optimally. Reforms have been stalled because the government assumed a link between the rights of the Kurdish citizens and the end of PKK violence, and this was viewed by even the anti-PKK Kurds as a sign of the state’s insincerity. The Silvan attack of July 2011, the subsequent Çukurca attack and the influential military operations in Kazan Valley have resumed the war.

Following the death of Atatürk, who saved Turkey from total annihilation and modernised it with a Western orientation, the Turkish army had set up its own system.

Although civilian governments were in charge, the military had always been the power behind the throne.

When the system of military tutelage was challenged, the implied domination of the military concretized in the form of coups, e.g. in 1960 and 1980.

from Today’s Zaman, your gateway to Turkish daily news :: Turkish Pre by İsmail Küçükkaya
I think the weakest link of the 10-year political and economic stability in the country is education. Three strong personalities who differ from one another in every aspect served as education ministers during this term. The sustainability principle in education remained in words. Ministers Hüseyin Çelik, Nimet Baş and Ömer Dinçer, who look at the world from different windows, ended the practices of their predecessors and worked to establish new worlds. The education system was subjected to endless changes. We did not sufficiently discuss any of the changes and we could not reach any consensus. What kind of generation are we bringing up under these circumstances? What kind of a Turkey can we create in 2023 with this vision? Will we be able to raise qualified people who will help us become one of the 10 most advanced economies in the world?

from Bianet :: English
Parliament Speaker Cemil Çiçek presented an 11 point document intended to solve the Kurdish issue during a press meeting on Tuesday. Prof. Büşra Ersanlı, who spent 8.5 months behind bars in connection with the Kurdistan Communities Union (KCK) trial, told bianet that the contents of the document were too murky, however.

ISTANBUL ? For nearly three weeks this summer, Turkey?s military and Kurdish guerrillas have fought one of the longest battles in their decades-long conflict, experts say. The guerrillas usually carry out spectacular attacks in the summer and fall, but the fight this year has been especially long and intense. Read full article >>

It can?t be accidental. Last week I was about to finish one of the key chapters in a book on Turkey I am writing with my wife. The book will be published in Dutch this autumn and tries to explain how present day Turkey works and why Turks think and act the way they do.