from euro|topics
Speculation over Greece’s euro exit and Spain’s precarious situation have caused turbulence in Europe’s financial markets. The euro fell on Monday to its lowest level in two years, Spain’s interest rates hit a record high, and risk premiums are also rising steeply in Italy. Commentators are baying for the ECB to buy up government bonds and decrying Berlin’s blockade mentality in the deepening euro crisis.

from euro|topics
Hundreds of thousands have taken to the streets in Spain to protest the austerity measures adopted by the government on Thursday. Meanwhile the bailout package for Spain’s banks obtained the approval of the German parliament and is to be set in motion by the Euro Group finance ministers this Friday. Commentators doubt that the Spanish economy will recover in the foreseeable future and urge the country’s population to remain calm.

from euro|topics
In the run-up to the troika visit on Tuesday the media are fuelling speculation about Greece’s bankruptcy and euro exit. The IMF is allegedly planning to end financial aid to Greece and German Economic Minister Philipp Rösler has all but given up on reforms in Athens. For some commentators these signals from international money lenders are long overdue, others are criticising Berlin for digging the Eurozone’s grave.

Breivik and the Norwegian immigration debate

from open Democracy News Analysis – by Bjørn Stærk
There is a limit to how much you can learn about moderates by looking at extremists. And if you stop noticing the difference altogether, you are well on your way to becoming an extremist.

from open Democracy News Analysis – by Tobias Hübinette and Kristina Boréus
Incitement to hatred against ‘non-Scandinavians’ is widely circulated on the internet, contributing to the legitimizing of right-wing extremist violence and the political exclusion of immigrants. If this does not endanger the political system as such, we should worry that it jeopardizes the right to security for many.

from euro|topics
In its mid-year health check of the world economy put out on Monday, the International Monetary Fund has stated that an escalation of the euro debt crisis is the worst threat facing the global economy. The European Central Bank needs more power and steps should be taken toward a banking and fiscal union, according to the report. Commentators likewise put their hopes in the ECB, but see a banking union as constitutionally problematic.

Berlusconi’s comeback: What could it mean for Italy’s future in the eurozone?

by Open Europe blog team
In today’s City AM, we argue:
The jubilant chanting and cork-popping in Rome last November now looks premature. In a sensational U-turn, Silvio Berlusconi has decided to run for Prime Minister in next year?s elections.

from Hurriyet Daily News
In a rare show of unity, Muslims, Jews and Christians in Europe unite against a ruling in Germany restricting circumcision. 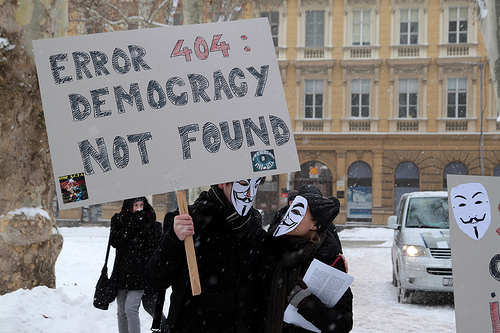 ACTA?s Defeat in Europe and What Lies Ahead

from EFF.org Updates by Maira Sutton
The people spoke, and politicians finally listened. Last week, the European Parliament rejected the Anti-Counterfeiting Trade Agreement (ACTA) in a rare sweeping majority vote. After years of secretive negotiations over this international agreement that would crudely protect intellectual property at the expense of Internet freedom, it has been defeated in Europe. Opposition elsewhere in the world continues to flourish, as suspicion grows that the remaining signatory countries may still be obligated to uphold the agreement and ratify it into their laws.

The European Union is set to being formal access talks with Montenegro. But as the case of Prva Banka shows, no progress against corruption will be made without a shift in the regime that has led the country since independence

Key figures in the Norwegian media have acted on the assumption that open confrontation with right-wing bloggers and activists is the most effective strategy to combat extremism.

from euro|topics
Europe’s crisis countries are optimistic after the EU summit in Brussels. Spain hopes for a retroactive bailout for its banks, while Italy can expect less stringent terms should it seek help from the bailout mechanism. Even Chancellor Angela Merkel returned strengthened from Brussels, commentators write, lamenting that the summit perpetuates the policy of small steps.

Portugal ? Please Switch The Lights Off When You Leave!

by Edward Hugh
The recent decision by the Portuguese constitutional court to unwind public sector salary cuts included by the government in its austerity measures has once more given rise to speculation the country may not meet it?s 4.5% deficit target for 2012. The court ? which ruled the non-payment of the two traditional Christmas and Summer salary payments for the years through 2014 was unconstitutional took the view that since the measure did not also apply to the private sector, it was discriminatory. Whatever view we may take on how the Portuguese Constitution defines ?discrimination? the important detail to note is that the decision will not apply to 2012, and will hence only have the impact of forcing the government to find additional adjustments for 2013 and 2014, or at least a new formulation which allows them to constitutionally cut public sector pay.

Romania and the rule of law in the EU

from The European Citizen by Eurocentric
The EU is a strange creature: in order to join a country must respect democracy, fundamental rights and the rule of law – a concept that is becoming ever more detailed and developed on the European stage – but the EU finds it incredibly difficult to ensure these standards are respected one a country is inside the club. There have been a few battles over the last few years: France’s treatment of the Roma, Hungary’s constitutional changes in the media and the courts, and now Romania.

What Central Europe thinks of Britain and why

Britain’s Conservative Party is committed to repatriating powers back from the EU. On July 12th, Foreign Secretary William Hague launched a review of the EU’s competences. This would, he told Parliament, be an “audit of what the EU does and how it affects us in the United Kingdom. It will look at where competence lies, how the EU’s competences, whether exclusive, shared or supporting, are used, and what that means for our national interest.” Many Conservatives expect this audit to prepare the ground for a manifesto commitment to renegotiate the terms of Britain’s EU membership. They hope that Britain can obtain opt-outs in areas such as financial services, judicial co-operation, employment, migration, regional policy or fisheries. They argue that Britain’s partners will wish to change the EU treaties to cope with the Eurozone crisis, and that Britain can trade off the repatriation of powers in return for its signature.