from Hurriyet Daily News
For Prime Minister Recep Tayyip Erdoğan, making a speech without mentioning or criticizing the media…

The root of the problem: the Special Authorized Courts

by Fréderike Geerdink
While I write this, late on Sunday night, there is chaos in the Turkish parliament. Before the summer recess starts next week, the ruling AKP party wants to change the law on Special Authorized Courts. Emotions are running high, even leading to a fist fight, and the outcome is unclear ? and it will probably

Now around 20 percent of serving generals are in prison accused of plots against Prime Minister Tayyip Erdogan, imaginatively codenamed Sledgehammer, Ergenekon, Blonde Girl, Moonlight. So sudden has been this reversal the generals appear robbed of

Which topic makes Erdoğan most furious at the media?

from Kamil Pasha by Jenny White
I?m in Abant at the moment, at the 27th Gülen-sponsored Abant Meeting. The meetings are annual gatherings of Turkish and foreign intellectuals and public personae (no politicians) who discuss a particular theme. The idea is to get people with a variety of views together for a couple of days in an isolated but beautiful spot (Abant, in the mountains near Bolu) where they freely discuss for three days, then come up with a written statement that everyone can live with. There are about seventy people here, mostly international and Turkish scholars, journalists, and diplomats (the Ukrainian and South African ambassadors and representatives from the embassies of Azerbaijan, Tajikistan, Uzbekistan, Serbia, and England; some others, like Israel, are on the list, but I didn?t see them).

from Bianet :: English
Transport Minister Binali Yıldırım said the United States has access to all information flowing from Turkish citizens due to companies like Google and Yahoo and announced the introduction of a national search engine instead, while Prof. Yaman Akdeniz questioned the wisdom behind such an initiative. 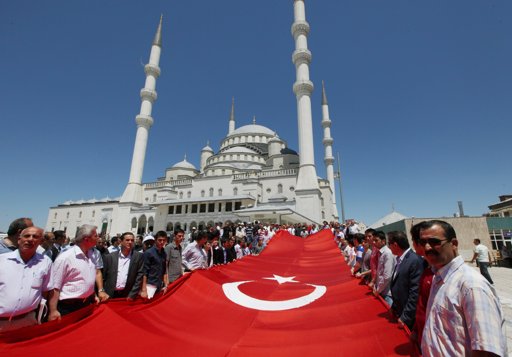 With Kocatepe Mosque in Ankara, Turkey in the background, Turks hold a national flag as they march to protest the killings of soldiers , Wednesday, June 20, 2012, a day after Kurdish rebels attacked Turkish military units with mortars and rocket-propelled grenades in the Daglica area of Hakkari province which borders northern Iraq Kurdish areas in southeastern Turkey, sparking clashes that killed eight soldiers and 18 rebels.(AP Photo/Burhan Ozbilici)