from Hurriyet Daily News
The negotiations between Iran and the world powers are to continue today in Istanbul at the level of technical experts.

from Hurriyet Daily News
The tension in Turkey-Syria relations is rising. For now, no one expects a conventional war. However, this does not mean .

Russia sees hope in Istanbul nuclear talks
APA
Moscow considered the results of the just-concluded Istanbul meeting between experts on the Iranian nuclear program as hopeful, Russian Foreign Ministry said Thursday, APA reports quoting Xinhua. “Althoguh there remains much to be done before

from Hurriyet Daily News
Russia believes it has exact positional data to prove that a Turkish air force jet shot.

from Hurriyet Daily News
Everyone is curious about what will happen next. This article intends to focus on some topics.

from NYT > Turkey by By THE ASSOCIATED PRESS
President Bashar al-Assad of Syria says he regrets the shooting down of a Turkish jet by his forces, and he will not allow tensions turn into an ?armed conflict,? a Turkish newspaper reported Tuesday.

Turkey learns who its real friends are ? so much for ‘strategic realignment’ | Simon Tisdall

from World news: Turkey | guardian.co.uk by Simon Tisdall
The Syrian crisis has exposed the folly and weakness of Ankara’s attempts to become a regional superpower
Funny how times change. When the Bush administration sought permission to transit its Iraq invasion troops through Turkish territory in early 2003, Recep Tayyip Erdogan, Ankara’s soon-to-be installed prime minister and his Justice and Development party (AKP) bluntly refused. Their bold defiance of America’s will won plaudits around the Arab world, not least from Syria.

from Hurriyet Daily News
NATO condemns Syria?s shooting down of a Turkish military plane as ?unacceptable,? but stops short of raising any military response while Russia says Syria?s downing of the jet should not be viewed as a provocation

from Hurriyet Daily News
The man in the street might conclude after hearing Tuesday?s ?policy statement? of Prime Minister..

from Hurriyet Daily News
CHP leader Kılıçdaroğlu accuses the government of weakening Turkey?s deterrence because of its ?foreign policy that depends on bluff? while reiterating his support to use diplomatic routes to resolve the crisis on Syria hit jet

by Acturca
Financial Times (UK) FT Report-Turkey, June 25, 2012, p. 1 By Daniel Dombey The Erdogan era has brought prosperity but there are calls for the political system to be modernised, writes Daniel Dombey. On a warm evening in Istanbul, the most powerful man in Turkey?s recent history was holding court. Recep Tayyip Erdogan, prime minister

Lessons from Ottoman past risk falling on deaf ears

by Acturca
Financial Times (UK) FT Report-Turkey, June 25, 2012, p. 3 By Andrew Finkel * It was certainly a sword-and-spear spectacular ? replete with cauldrons of molten pitch and computer-enhanced biceps ? but was it also an allegorical tale of eurozone decline? Either way, the Turkish film to break box office records this year was Conquest

Ambitions threatened by problems in own backyard

by Acturca
Financial Times (UK) FT Report-Turkey, June 25, 2012, p. 1 By Gideon Rachman Turkey, in the era of Recep Tayyip Erdogan, is playing a regional and global rule that has filled its leaders with pride and ambition. The country?s record of economic and political success has greatly added to its prestige and power. Some around

EU and the Turkish-Cypriot Civil Society

from Ideas on Europe by georgekyris 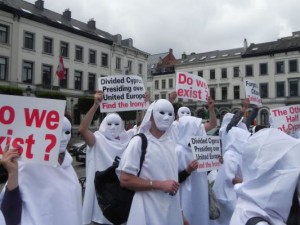 from Hurriyet Daily News
Greece?s new foreign minister has called on Turkey to stop its ‘threats and aggressive attitude’ toward Greek Cyprus

Diplomatic, and Consular Relations with Turkey

from Mavi Boncuk by M.A.M
Mavi Boncuk | The United States’ History of Recognition, Diplomatic, and Consular Relations
See also: the interests of the United States throughout the Ottoman Empire
http://maviboncuk.blogspot.com/2012/04/interests-of-he-united-states.html