Istanbul ranks at 79th spot in cost of living

Istanbul ranks 79 in terms of cost of living, according to the 2012 Mercer Cost of Living Study, which analyzed 214 global cities on five continents. Turkey dropped nine notches from last year becoming a cheaper city to live in.

In Istanbul, a Showcase for International Artists

For 40 years, the Istanbul Music Festival has brought performers from around the globe to evocative settings in Turkey’s cultural capital, and this year is no exception. The festival, which runs through June 29, showcases performers like the

(RTTNews) – The second meeting of the Coordinating Committee of the Global Counterterrorism Forum (GCTF) opened in the Turkish city of Istanbul Thursday, with foreign ministers and senior representatives from 30 countries and the United Nations in

Each year, we look forward to the varied entries and the selected finalists of the MoMA + MoMA PS1 Young Architects Program for an outdoor recreational.

Istanbul ? a model of hospitality

By Misbahuddin Mirza. ?Could you slow down? Please?? I asked the cab driver as he started racing down the freeway, leading away from the Istanbul airport,

Sunday is the day when many non-residents visit Tarlabaşı for the marvellous market that runs through the streets.  This Sunday there is an added incentive above great food though ? a group of international and Turkish artists have been at work in one of the now deserted buildings.  What was once a family home from which the residents were evicted months ago to make way for the ?renovation? programme, is now home to a series of exhibits under the title ?Division Unfolded: Tarlabaşı Intervention?.

by Constanze Letsch
Backlash against development in Turkish capital of 13 million people, which is already ‘spreading like a cancer cell’
When Turkey’s transport minister announced the launch of one of the most contested construction projects in Turkey ? a third bridge over the Bosphorus ? on 29 May, he said the date of the announcement had been chosen because it marked the anniversary of Istanbul’s conquest by the Ottomans.

Turkey: Is An Istanbul Grand Mosque, Erdogan’s Latest “Crazy …
EurasiaNet
Along with his suggestion that abortion may soon be banned, the other bombshell that mercurial Turkish Prime Minister Recep Tayyip Erdogan recently dropped

Despite Istanbul’s splendour, Turkey’s not quite on the mark

Without wishing to appear ungrateful to the country where I just spent a pleasant week in the Ottoman splendour of Istanbul, I left with the impression it still had some way to go before it could fulfil its ambitions to be the “role model” for the rest

from Hurriyet Daily News
Daily Hürriyet claimed yesterday that Madonna asked the manager of a restaurant.. 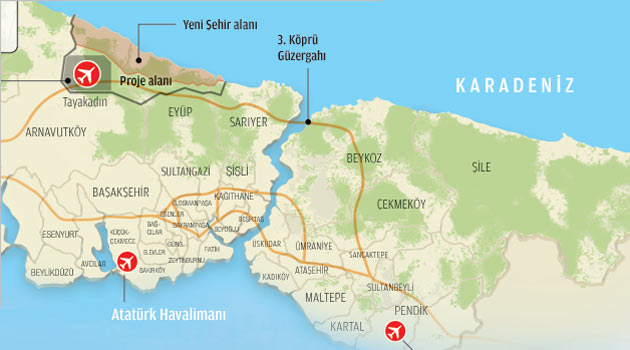