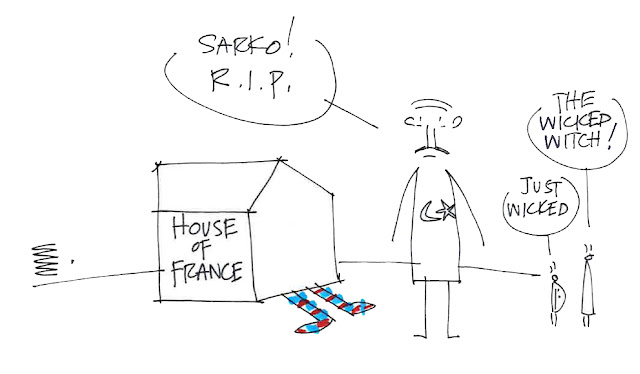 from Hurriyet Daily News
The election of François Hollande as France?s President will not repair bilateral..

Why Turkey should be thankful to Sarkozy?

from Hurriyet Daily News
Although Turkey, both at the level of the state establishment and the people in the street, is happy.

from Today’s Zaman, your gateway to Turkish daily news :: Interviews by Gary Lachman*
The election of François Hollande to the French presidency creates a new window of opportunity to re-energize Turkey’s stalled European Union membership negotiations

from Hurriyet Daily News
EU Minister Egemen Bağış advised those with indigestion in the European Union to take up Nordic walking, as a means of making fun of those opposed to Turkey?s membership in the union.

Turkey has indicated its intention to veto the EU’s participation in the upcoming NATO summit in an apparent sign of growing disenchantment with the Union before the rotating EU presidency is taken up by Cyprus, a country that Turkey refuses to recognise.

by Acturca
Today?s Zaman (Turkey) 3 May 2012, p. 17 Istanbul The European Union?s Global Trends 2030 report says Turkey will play an even more influential role in the international community in 2030. According to the Global Trends 2030 report, Turkey, along with several other middle powers, will become even more prominent. The European Commission explored the ?long-term

Are we the new owners of the Middle East?

from Hurriyet Daily News
The speech Foreign Minister Professor Ahmet Davutoğlu delivered last Thursday at the parliamentary session on developments in Syria must ..

by Acturca
Turkey Policy Brief Series (IPLI ? TEPAV) 3rd edition, 2012, 9 p. Français by Ahmet Davutoğlu This policy brief elaborates the principles of Turkey?s foreign policy as the country responds to the regional political transformation. The brief argues that Turkey sees the regional transformation as a natural process and works to devise suitable policies to

from Hurriyet Daily News
Thanks to Binbir Gece (A Thousand and One Nights) TV show, interest in Turkish culture has risen in Croatia. Some families have begun to name their sons Onur, the lead character in the series.

Turkey: a success story of tripartite coexistence – The Nation

Imtiyaz Yusuf
Special to The Nation May 4, 2012 1:00 am
It is generally thought that Islam, secularism and democracy are incompatible.

Father to go after journalist son lost in Syria

Turkey: ?Made in Italy? allied with ?Anatolian Tigers?

Does Europe need Turkey? | The Upcoming

There is much discussion about whether Europe needs Turkey, but the question could easily be reversed: does Turkey need Europe anymore?

from Today’s Zaman, your gateway to Turkish daily news :: Columnists by ŞAHİN ALPAY
Criticisms directed towards Ankara’s foreign policy both domestically and from abroad, which were actually never lacking, are on the rise. The main argument is that Turkey’s ?zero problems with neighbors? foreign policy paradigm, designed by Foreign Minister Ahmet Davutoğlu, has led to total failure, his vision has proved to be in conflict with the realities on the ground. Joost Lagendijk’s column titled ?Zero neighbors without problems,? published in Today’s Zaman on Nov. 2, 2011, perhaps best summed up the criticisms leveled at Ankara from abroad.

from Today’s Zaman, your gateway to Turkish daily news :: Columnists by YAVUZ BAYDAR
Readers of this column should know that I have more often than not refrained from issuing premature judgments on the details of politically sensitive legal trials. In particular, this has applied to individuals who have been named and pushed to the fore more than others because they obviously have stronger networks that continue to lobby for their cases.

Turkish PM Erdogan tells Syrian refugees: ‘your victory is not far off’

from World news: Turkey | guardian.co.uk
Erdogan addresses crowd of refugees at Kilis province camp, a temporary home to 9,000 Syrians
Turkish prime minister Recep Tayyip Erdogan told Syrian refugees on Sunday that victory for the rebels in their country was not far off and President Bashar al-Assad was “losing blood” by the day.