An eponymous museum created by Orhan Pamuk in the wake of the writer?s recent ?Museum of Innocence? opened its doors.

The Success of Orhan Pamuk’s Museum of Innocence – NYTimes.com 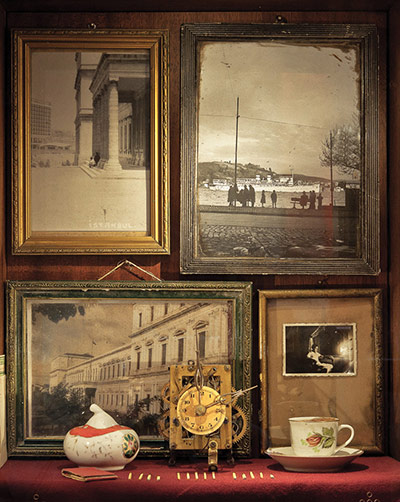 from World news: Turkey | guardian.co.uk by Orhan Pamuk
As the Nobel laureate opens a museum in Istanbul displaying the objects from which his latest novel, The Museum of Innocence, is constructed, Orhan Pamuk guides us round a selection of the exhibits

from Today’s Zaman, your gateway to Turkish daily news :: Columnists by YAVUZ BAYDAR
After I read my second-favorite novel by Orhan Pamuk, ?Snow? (surpassed in my mind by his masterpiece, ?The Black Book?), I had always carried the hope — which I never mentioned to him in our encounters — that he would one day open a museum on Kars — the city — in Kars.

A new book published by the Istanbul Municipality, ?Istanbul: The Awakening of the Historical City,? aims to reflect how Istanbul evolved over time.

ISTANBUL ? Orhan Pamuk’s Museum of Innocence, which opened here last weekend, is an unprecedented project for a writer: the first museum in the world based on an eponymous work of fiction. ?The idea came to me almost 15 years ago to set an imaginary

Istanbul, which has recently been hosting the James Bond film crew in its historical neighborhoods, has long been a popular destination for international filmmakers due to its many cultural and historical venues

Beginning July 3 and continuing until July 19, this year?s Istanbul Jazz Festival will bring 300 international and local musicians together in the city

Canal Istanbul to be real in six years, minister claims

04/28/2012 Turkish Nobel laureate Orhan Pamuk on Friday inaugurated a museum based on his last book about an obsessive lover who collects things to remind him of his inamorata and soothe the pain of a doomed affair. Nobel laureate and Turkish

Named after his 2008 award-winning novel, Orhan Pamuk’s Museum of Innocence features 83 displays on everyday Istanbul life drawn from the book’s 83 chapters. The museum, in Istanbul’s central Beyoğlu district, is meant to contrast with Europe’s

Walking the streets of Istanbul ? Simpson Prize 2012 | Australian …
By Stuart Baines
Today was another fantastic day in Istanbul. Walking the cobbled streets of this ancient city we found amazing mixes of the old and news at each new turn. Our Turkish guide, Ozgur, has impressed me once again this year and managed to find

Daniel Craig and the James Bond cast in Istanbul for Skyfall filming
Telegraph.co.uk
Talking about the latest James Bond film Skyfall, Daniel Craig, Sam Mendes and Berenice Marlohe attend a press conference and photo call in Istanbul. Oscar-winning director Sam Mendes has promised a return to the original character of James Bond as

from Hurriyet Daily News
Bodyguards for James Bond actor Daniel Craig struggled to prevent the media from filming the star in between takes, resulting in tension and a minor confrontation on set.

Artist in search of an Istanbul without human element

ISTANBUL ? I blame James Bond for my romantic vision of Istanbul. I got my first glimpse of the city from the edge of a seat in a dark Philadelphia theater on a Saturday afternoon in the early 1960s, watching Sean Connery save the world from the evils

The Insider in Exotic Istanbul with 007

Result of third Istanbul bridge tender seen in May

ANKARA, April 20 (Reuters) – Turkey will decide the result of tender next month to build and operate a multi-billion dollar highway project involving construction of a third bridge across Istanbul’sBosphorus strait, officials said on Friday,

James Bond has returned to Istanbul for its 50th anniversary. British actors Daniel Craig, Naomie Harris and French actress Berenice Marlohe arrive for the photo call of Skyfall, the 23rd film in the James Bond series in Istanbul, Turkey.

The exhibition ?Goya: Witness of His Time? features a total of 230 oil paintings and engravings by the Spanish artist Francisco de Goya and continues through July 29 at the Pera Museum in İstanbul.(PHOTOS: Today’s Zaman, Mühenna Kahvecİ) On Friday

From Amsterdam to Istanbul, Art and Diplomacy

ISTANBUL ? Turkey and the Netherlands are celebrating 400 years of diplomatic ties with a yearlong series of events, including an exhibition that draws parallels between the Dutch of the 17th century and the Turks of today. ?Where Darkness Meets Light

A tender for a third airport in Istanbul will open this year. Also in business news: BiH’s government adopted a budget for 2012 and Romania plans to reorganise its tax system. Turkey Transport Minister Binali Yildirim announced on Saturday (April 21st)

That’s why one of the first things I wanted to do in Istanbul was discover the delights of the Turkish bath. The opportunity came sooner than I thought. Our companion for a couple of days was an effervescent local called Ilginay, who had been deputised

The 19th Istanbul Jazz Festival will again bring the stars of jazz to Istanbul in July with 50 concerts and more than 300 local and international artists. The festival will expand across the city this year with more than 20 different venues.

A historic quarter of Istanbul regains its place in the sun

When I first started coming to this side of Istanbul, just after the millennium, Pera was old, dirty and unnerving. There were streets off Istiklal Caddesi where, as a tourist, you did not walk. The bar in the Pera Palace Hotel was so dingy I’d swear

A culinary walk through Istanbul

People come to Istanbul for many reasons, such as the history and the art, but for me, this time anyway, it’s all about the food. And what better way to make some new discoveries and tread some new back streets than under the guidance of an expert?