The History of File-Sharing 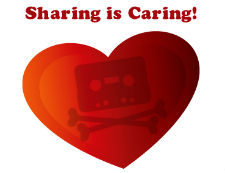 Digital filesharing has come a long way since the early days of the floppy disk, starting with a 79.7 kB storage capacity in the early 1970s.

CISPA, ?National Security,? and the NSA?s Ability to Read Your Emails

from EFF.org Updates by trevor
This week the House of Representatives is debating CISPA, the dangerous ?cybersecurity? bill that threatens to decimate Internet users? privacy in the name of security. EFF and a wide variety of other groups have been protesting the law?s provisions giving companies the power to read users? emails and other communications and hand them to the government without any judicial oversight whatsoever?essentially a giant ?cybersecurity? exception to all existing privacy laws.

from Berkman Center Newsfeed by ashar
The Berkman Center for Internet & Society is pleased to share the OpenNet Initiative (ONI)’s annual roundup of top instances of filtering, surveillance, and information warfare around the globe:
2011 Year in Review

The Internet Gets a Hall of Fame (Including Al Gore!)

from Wired Top Stories by Ryan Singel
The best revolutionaries eventually find themselves hailed in tributes and enshrined in museums. So it’s almost inevitable that nearly 30 years after the official birthdate of the internet, some of the net’s best-known pioneers, radicals, and troublemakers are being inducted into the Internet Society’s Hall of Fame. The inaugural group includes 33 of the net’s most influential engineers, evangelists and entrepreneurs including internet fathers Robert Kahn and Vinton Cerf; internet standards guru Jon Postel; web inventor Tim Berners-Lee; encryption pioneer Phil Zimmerman; and Mozilla’s Mitchell Baker.

from Wired Top Stories by Mike Barton
Last week was heavy with “open” news regarding the cloud. What do all the OpenFlow and OpenStack moves mean to real open source? Will open source rule the cloud? Can SaaS and open source be at one? Weigh in.

from social media vb by akshaybk
There are a few things you need to add to your list of to-dos that will not only hold the entire game plan together but also provide that extra to your results. Combining a list of top 20 of these from past campaigns across sectors such as education, FMCG, lifestyle and travel here are some that will help you get more and learn more from the campaigns you run in the future

Google and Facebook greatly expanded their lobbying budgets in Q1

from EFF.org Updates by jillian
On Monday, President Obama, in a speech at the Holocaust Memorial Museum in Washington, DC, announced new measures to help curb human rights violations by the Syrian and Iranian governments.  These measures include an executive order targeting people and companies facilitating human-rights abuses with technology, as well as a set of ?challenge grants? that would fund companies to help create new technologies for the purpose of warning citizens in countries where mass killings may occur.

from EFF.org Updates by jaycox
The recent Week of Action against CISPA, the dangerously vague ?cybersecurity? bill , highlights the growing bi-partisan disapproval of the many provisions that would gut all existing privacy laws. Internet users across the political spectrum voiced their concerns with how the bill allows companies to spy on users, filter content, and transfer personal information to agencies like the NSA.

Survey: 37% of your prospective employers are looking you up on Facebook