from Today’s Zaman, your gateway to Turkish daily news :: Interviews
The simplest explanation of digital diplomacy is to say that international ties are no longer just shaped by relations between countries, but that diplomacy now also uses digital tools and skills to prevent and overcome problems that occur in its arena.

Does Turkey care what EU thinks?

from Today’s Zaman, your gateway to Turkish daily news :: Columnists by AMANDA PAUL
After a period of intense lobbying, at the end of last week the European Parliament?s Turkey Report was finally adopted. This year?s edition welcomes efforts to strengthen civil supervision of the army, while at the same time calling on Turkey to fully open military expenses to judicial control as well as include the Turkish Armed Forces (TSK) in civil jurisdiction; it reiterates the need for urgent judicial reform and a new ?inclusive? constitution, which will help strengthen democracy. 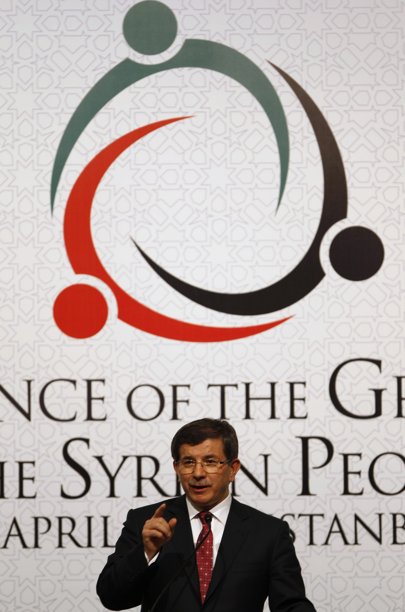 Turkey’s Foreign Minister Ahmet Davutoglu speaks during a news conference at the “Friends of Syria” conference in Istanbul April 1, 2012. Davutoglu said on Sunday the international community would not allow Syrian President Bashar al-Assad to “misuse another opportunity”, saying current efforts to end the conflict there represented a last chance. REUTERS/Murad Sezer

Turkey Raises Alarm to U.N. Over Worsening Violence in Syria

from NYT > Turkey by By RICK GLADSTONE
Turkey?s foreign minister reported increased Syrian military attacks near the border and a relentless influx of refugees from Syria on Friday.

from Hurriyet Daily News
There is a competition between France and Turkey as well as its leaders, says a French expert on Turkish-French relations.

from Today’s Zaman, your gateway to Turkish daily news :: Interviews by KLAUS JURGENS
From externally enforced trundling along to locally motivated high-speed once more — Turkey readies herself for EU membership!

from World news: Turkey | guardian.co.uk by Constanze Letsch
Opponents of regime of Bashar al-Assad treat their wounded and launch supply expeditions from neighbouring country
Routed by a brutal conflict and driven from their country, Syrians in Turkey might be expected to be a desperate bunch. But in the border camps and hospitals, defiance far outweighs despair.

We are all Levantines now

by Acturca
Le Monde diplomatique – English edition (France) April 2012 by Philip Mansel * The Levant, with its eastern Mediterranean trading cities that flourished thanks to the Franco-Ottoman alliance, was an economic and diplomatic experiment that pioneered a way of life all the world now understands. The Levant means ?where the sun rises?: the eastern Mediterranean

by Acturca
Asharq Al-Awsat (UK) April 1st, 2012 By Tha?ir Abbas, Ankara Ahmet Davutoğlu is the Turkish Minister of Foreign Affairs and a prominent Turkish academic. He holds a masters degree in public administration and a PhD in political science and international relations, both obtained from Bosphorus University. Before being appointed as a government minister, Davutoğlu worked

by Acturca
The Miami Herald (USA) Wednesday, 04.04.12 By Henri J. Barkey and Johanna Mendelson *   Brazilian President Dilma Rousseff arrives in Washington on Monday. Her meeting with President Obama is a reminder of how much international relations have changed during the last decade. The United States must increasingly rely on rising powers such as Brazil

by Acturca
House of Commons ? Foreign Affairs Committee (UK) Twelfth Report of Session 2010-12, HC 1567, 4 April 2012 The Foreign Affairs Committee?s report considers the Government?s efforts to cultivate Turkey as a ?strategic partner? for the UK and to support Turkey?s accession to the European Union. The report concludes that the Government is right to

by Acturca
The Daily Star (Lebanon) April 02, 2012, p. 4 By Fulya Ozerkan, Ankara (AFP) The stellar growth Turkey has enjoyed over the past two years may soon come to a swift end, analysts warn, as the country?s economy shows signs of overheating. Turkish government officials still paint a rosy picture about the state of economy

All Eyes on Ankara: Can Turkey Lead in Syria?

by Acturca
German Marshall Fund Blog (USA) 12 December 201 Joshua W. Walker * The Turkey of today has far more tools at its disposal than ever before to advance its agenda as a leading regional power. Having sought the role of regional mediator over the last decade, Turkey?s litmus test of leadership comes in Syria, beginning

from Today’s Zaman, your gateway to Turkish daily news :: Columnists by SUAT KINIKLIOĞLU
Turkey?s history with the Persians goes back a very long way, dating back to the days when the Turks converted to Islam and began wandering into Persia from Central Asia. Since then, there has always been a rivalry between us and them. This rivalry intensified even further when the Safavids accepted Shiite Islam and the competition deepened with the religious dimension.