from EFF.org Updates by jillian
In the wake of a horrific rampage, in which Mohamed Merah (now dead after a 32-hour standoff with police) reportedly murdered three French soldiers, three young Jewish schoolchildren, and a rabbi, President Nicolas Sarkozy of France has begun calling for criminal penalties for citizens who visit web sites that advocate for terror or hate.  “From now on, any person who habitually consults Web sites that advocate terrorism or that call for hatred and violence will be criminally punished,” Sarkozy was reported as saying.

France?s National Digital Council (CNNum), an advisory committee created by President Nicolas Sarkozy himself, has spoken out against a plan to punish frequent visitors of extremist websites.

It?s a cheerful day for the copyright industry. In France the controversial ?graduated response? law (Hadopi) has evaporated unauthorized file-sharing.

from Today’s Zaman, your gateway to Turkish daily news :: Columnists by BERİL DEDEOĞLU
A 23-year-old Frenchman of Algerian origin, Mohamed Merah, has become the most important person in France. 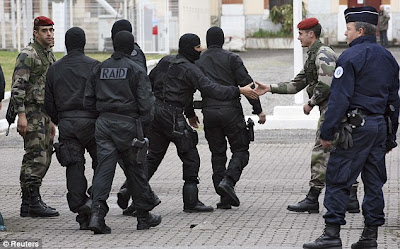 As the French security forces kept besieging the suspected terrorist Mohamed Merah in Toulouse, I had tweeted the following words three days ago:

from Today’s Zaman, your gateway to Turkish daily news :: Columnists by BERİL DEDEOĞLU
Academics shouldn?t give any credit to conspiracy theories. However, in Turkey, you feel obliged to pay them some attention.

from Project Syndicate by James A. Goldston, et al.
At a time when Europe’s ongoing debt crisis is fracturing public faith in the continent?s political and economic institutions, European leaders should strengthen as many unifying symbols as they can. Instead, they have allowed one of the jewels of European integration ? the European Court of Human Rights ? to come under threat as well.

Have eurozone policy-makers finally managed to lance the boil? They can certainly point to lower borrowing costs in Italy and Spain as evidence of stabilisation. Many of them argue that this demonstrates the success of the strategy of fiscal austerity and structural reforms. The more thoughtful among them acknowledge that borrowing costs in Spain and Italy have actually come down because of the ECB?s long-term refinancing operation (LTRO) ? it has lent almost unlimited amounts of money in cash to the region’s banks at 1 per cent, who in turn have bought Italian and Spanish debts. But they will then argue that this has carved out sufficient breathing space for structural reforms and fiscal austerity programmes to boost confidence and lift economic growth. There is no doubt the ECB has bought the eurozone time, but that time is not being used constructively. And the LTRO is storing up trouble for the future.

from BBC News | Europe | World Edition
An imam has been killed in a fire at a Shia mosque in a Brussels suburb, in what is believed to have been a deliberate attack.

Should China bail out Europe?

from Ideas on Europe by Miguel Otero-Iglesias

Many economists, pundits and policymakers in Europe think that China is in an ideal position to rescue the Eurozone from its debt problems. The main argument goes more or less like this: China has $3.2 trillion foreign reserves, of which two thirds are in US dollars and only one quarter is in euros. It would make perfectly sense for China to diversify its portfolio and so reduce its foreign exchange risks. Further, by investing in European debt China can finally demonstrate that it is a responsible stakeholder in the new economic world order. As the saying goes, you recognise your friends when they come to help you in moments of need. Well, time has come for China to show how much it cares about the fate of Europe. European leaders, first the prime ministers of debt-laden Eurozone peripheral countries such as Greece, Portugal, Ireland, Spain and Italy, and recently even German Chancellor Angela Merkel, the de facto chief representative of the Eurozone, went cap in hand to Beijing to ask for support. So, should China take this once-in-a-lifetime opportunity and become Europe?s White Knight? The answer is no. Why?

EU Towards a Single Market Act

After looking at Your Single Market? and other introductory material, we turn to the communication (available in22 languages) prepared under the responsibility of the internal market commissioner Michel Barnier. The English language version of the consultation paper:

from Blogactiv by Eberhard Rhein

In the on-going debate about the future of the Euro it is often forgotten that membership in the Euro-zone is mandatory for all EU member States provided they fulfil the Maastricht criteria ? budget deficit below 3 per cent and public debt below 60 per cent of GDP ? and have achieved a satisfactory level of economic & monetary convergence ( small current account imbalances and interest rates in line with Euro zone countries).

Is Europe prepared for the new world order?

In the first time since centuries, Asia?s military spending will surpass that of Europe in 2012 according to London based International Institute for Strategic Studies, which is preparing to launch its annual Military Balance publication. With Asia?s continuing robust economic growth together with strategic incentives for defense modernization on the one hand, and Europe?s economic crisis, drastic defense budget cuts and no major imminent security threat on the other this isn?t such a surprising development. The news just clearly represents a milestone of a historical trend, the geopolitical shift of power from the Euro-Atlantic area towards Asia.

The Eurogroup finance ministers on Friday agreed to raise the aid available to debtor states from 500 to 800 billion euros, including all loans allocated to date. But Europe’s politicians still fail to grasp the seriousness of the situation and are merely buying themselves time, say some commentators, while others hope the bailout package will further integration in the Eurozone.

No Need to accelerate E-Mobility in Europe

from Blogactiv by Eberhard Rhein

The 100-year old internal combustion engine will be phased out in the coming six decades or so. This is bound to happen for two concurring reasons:

Towards a more secure Europe

Since the autumn of 2008, the financial crisis and its implications has dictated the EU policies. The pressures on EU governments to control expenditure continue to be enormous. Defence has not remain immune raising important questions how Common Security and Defence Policy (CSDP) of the EU can function in this new environment and even if it can survive austerity. Some commentators see it only as a question of choices ? how much does defence matter and where does it stand in national priorities, missing a critical point: without a strong security and defence policy in the EU, underpinned by credible military capabilities, Europe risks becoming a marginalized, second-tier player.

Hungary’s President Pál Schmitt resigned on Monday over accusations of plagiarism. He is said to have copiedlarge sections of of his doctoral thesis. Schmitt was entirely unsuitable and nothing but Prime Minister Viktor Orbán’s puppet, some commentators write, while for others the resignation is proof that democratic rules are still in force in the country.

Not so bullish now? The short term prospects for Spain inside the eurozone

In a new briefing, Open Europe assesses the state of the Spanish economy in light of recent budget proposals, announced by the Spanish government in full today. Spain is not the ?next Greece? – it remains a serious and diverse economy, with relatively good administration and infrastructure. However, the increasing exposure of its banks to potentially toxic loans, the difficulty in curbing Spanish regions’ spending and the risk of reforms not taking effect quickly enough, all raise serious questions as to whether the Spanish economy will make it through without some sort of external help.