My dear readers, i have been so busy with some academic and personal stuff that I could not produce my usual roundups. Now, I am working on it by offering the latest news: Shut down of Özgür Gündem and I will retrace the older news…

The 14th High Criminal Court of Istanbul ordered the closure for a month of the Kurdish daily paper Özgür Gündem with the claim that it does terrorist propaganda through news, commentaries and photographs it prints. This decision by the court is a huge blow against press freedom. Any news and opinion pieces that do not directly instigate violence should be considered within the context of freedom of thought. The Turkish Penal Code and Antiterrorism Law need to be reexamined and ammended to reflect a more democratic language.

from Hurriyet Daily News
A group of hackers claimed that seven people arrested in an ongoing probe were not part of their movement and hacked a website to prove it.

?The numbers speak for themselves,? said Haluk Sahin, professor of journalism at IstanbulsBilgi University. ?With nearly 100 journalists in jail, you cannot claim that Turkish democracy is in good shape.? Reporters Without Borders recently ranked .

“This shows that this is outrageous,” says Aslı Tunç, Associate Professor of Communications and Media at Bilgi University, where Şık also worked until his arrest. “The other people, we can never be sure; you could think maybe there is something there.

BDP Deputy Ertuğrul Kürkçü talked to bianet about the massive police intervention against the Newroz celebrations in Mersin. Kurdish politician Ahmet Türk was beaten by the police in Batman and underwent medical treatment.

BDP district executive Hacı Zengin died after he was hit by a gas bomb thrown by the police during heavy interventions against thousands of people who wanted to celebrate Newroz. The Ministry of the Interior denied permission for the celebrations this year.

The Malatya Military Court claimed that decisions of the ECHR regarding conscientious objection could also be applied to domestic law in the scope of Article 90 of the Constitution. This landmark ruling was the result of the trial against conscientious objector Delice. 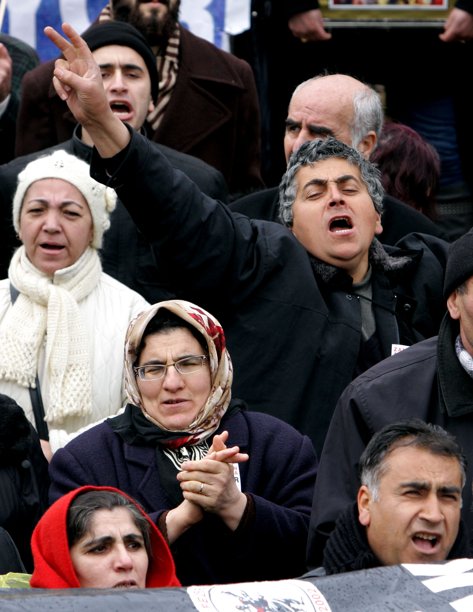 Hundreds of Alevis, members of Turkey’s largest religious minority, protest outside a court house in Ankara, Turkey, Tuesday, March 13, 2012. The protest comes ahead of a court decision on whether statute of limitations has expired for some suspects who allegedly torched a hotel in 1993 that left 37 people dead, including many Alevis. Alevi Muslims, who do away with many customary Islamic practices, including separation of men and women in prayer, have long faced discrimination in Turkey. (AP Photo/Selcan Hacaoglu)

Turkey’s enlightenment languishes, like the journalists in its prisons | Fiachra Gibbons

by Fiachra Gibbons
The record number of reporters imprisoned in Turkey threatens to extinguish the flame of democratic reform
A year ago, police burst into the homes of two of Turkey’s best investigative journalists, Nedim Sener and Ahmet Sik, and carted them off to prison where they remained until last night, charged with crimes so nebulous even prosecutors can’t explain them.

According to the indictment of the trial related to the Union of Kurdish Communities prepared by Prosecutor Çimen, Prof Ersanlı is facing imprisonment of 22.5 years on charges of leadership of an illegal organization. Nobel Peace candidate Zarakolu is facing 15 years in jail.

Sensing a Siege, Kurds Hit Back in Turkey

by By SUSANNE GUSTEN
Kurdish activists have intensified their calls for greater autonomy after dozens of officials were arrested or jailed.

Kurds, Alevis and their fundamental rights

from Today’s Zaman, your gateway to Turkish daily news :: Turkish Pre by CENGİZ ÇANDAR RADİKAL
On the issue of ensuring equal rights for all, one of my friends has recently pointed to an individual?s right to use his or her mother tongue.

According to a survey made with children who were forced to immigrate to the cities of Diyarbakır and Istanbul, violence is an omnipresent part of their lives and constitutes the most influential factor for crime.

256 sick convicts, 106 of whom are severely ill, are waiting for their release from prison, according to the 2011 report of the Human Rights Foundation. Especially prisoners in eastern and south-eastern regions are continuously exposed to rights violations.

1 thought on “EFD Rights Watch: Medya Association protests the shut down of Özgür Gündem and a Human Rights in Turkey roundups”