from BBC News | Europe | World Edition
German President Christian Wulff announces his resignation, after prosecutors called for his immunity to be lifted amid a home loan scandal.

Is the troika punishing Greece? Why?

from Blogactiv by Protesilaos Stavrou
Ever since September 2011 or even earlier, we have all been experiencing a crazy rollercoaster ride, regarding the situation in Greece. Every day there is information made public about the ?increased? chances of Greece defaulting on its debt obligations, or about a statement of an EU official or other top-ranked politicians which disturbs the overall balance by asking for greater efforts from the Greek government as far as the implementation of its bailout programme is concerned and so on. In short Greece (and we) have been living in an environment of high political and economic uncertainty, which has had all sorts of negative implications on the Greek economy and the prospects of the Eurozone as a whole to recover from its systemic crisis.

Who Lost Greece? The Geopolitical Consequences of the Greek Crisis

by Acturca
Policy Paper (ELIAMEP) No 18, February 2012, 23 p. Thanos Dokos * In the maelstrom of the European economic crisis, the geopolitical consequences of Greece?s weakening and [at least theoretically] possible collapse have been largely ignored by analysts and decision-makers. This policy paper written by Director General of ELIAMEP Dr Thanos Dokos is making no,

Europe?s retirement ages in the spotlight

from FT.com – World, Europe
Sweden?s and Italy?s average retirement ages differ by five years ? one of the disparities the European Commission is keen to reduce

Is Germany trying to bully Greece out of the eurozone? 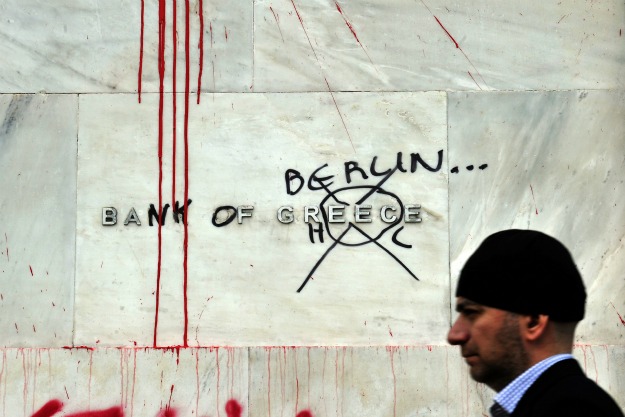 Things are getting ugly on the continent, as the Financial Times reports:

from Open Europe blog by Open Europe blog team
The decision on the second Greek bailout has been put on ice until (at least) next Monday, but things are moving fast in and around Greece these days – so here are yesterday’s five key developments in the Greek crisis:

from Ideas on Europe by Mateusz Hudzikowski

Will Poland enter the eurozone? That is the question.

Recently the head of the European Parliament Martin Schultz rectified his statement that the Prime Minister Tusk declared Polish accession to the eurozone in 2015. Schultz did it after the vehement contradiction from Polish side. Perhaps both sides know more than they want to reveal or perhaps it may be a mere misunderstanding. But more likely that both Tusk and Schultz tried to accomplish some ?political goal? after their meeting.

from Blogactiv by Protesilaos Stavrou
Anyone who has studied history, even on the surface, knows that the Hobesian dictum ?bellum omnium contra omnes? ? ?war of all against all? holds true, especially when crises hit humanity. It is during such times that reason and rationality give their way to hatred and prejudices. The current systemic crisis of the euro could not possibly be an exception to this historical ?rule?. Ever since the crisis first hit Europe several interest groups tried to put the blame on a particular party for the misery that hit us. We all remember how the people of Southern Europe were depicted as ?PIGS? and how certain purely racist and stereotypical beliefs gained popularity, such as the completely groundless assertion that the Greek people are ?lazy?, contrary to others who are industrious – even though the data is showing the exact opposite (see Common misconceptions about bankrupt Greece).

from euro|topics
In a meeting with his generals, Greek President Karolos Papoulias on Wednesday attacked the German Finance Minister Wolfgang Schäuble as well as the Dutch and the Finns, after they warned that Athens must not turn into a bottomless pit. But even if some Europeans interfere too much in Greek affairs, such outbursts should not be allowed to fuel people’s hatred, commentators write.

ACTA coming up in the European Parliament (INTA)

by Grahnlaw
Today, most of the documents for the 29 February 2012 meeting of the Committee on International Trade (INTA) of the European Parliament have now been posted online.

Among the documents we find (Agenda item No 23):

European Foreign Policy: What can Bulgaria learn from Sweden?

from Ideas on Europe by ecfr
Hans Kundnani is one of the lead authors of the ECFR?s Foreign Policy Scorecard. He?s writing this series of blog posts as he attends a series of Scorecard events across Europe and beyo
The first stop of my Scorecard tour was Sofia. I?m writing this from the departure lounge at Sofia airport, which overlooks the snow-covered tarmac (it?s been snowing here for three weeks and shows no signs of stopping). This afternoon, we had a very interesting discussion with a group of a dozen or so people that included a former foreign minister, parliamentarians, officials (including someone from the new president?s office), journalists and think tankers.

Swedish Finance Minister Anders Borg ?top of the pile in Europe according to the FT ? today gave the EU committee of the Swedish Riksdag the lowdown ahead of Monday?s meeting of EU finance ministers (in some countries, lo and behold, ministers are actually accountable to their parliaments for what they say and do at EU summits). Amid all the gloom and doom, Borg outlined seven reasons to now be more optimistic about the state of the European economy:

by Open Europe blog team
As Die Welt reported yesterday, it now looks as if the ECB will swap it?s circa ?55bn (nominal) holdings of Greek debt into newly issued Greek bonds provided by the Greek state. Below we attempt to summarise what this actually means. It?s a bit techie ? so bear with us.

French election: At the centre of the storm

from FT.com – Analysis
Sarkozy is pitching himself as the ?captain? who can steer through the eurozone crisis ? but he faces serious challenges, writes Hugh Carnegy

by Grahnlaw
After the introductory blog post about the proposed EU regulation about customs enforcement of intellectual property rights COM(2011) 285, we follow this future ?more robust enforcement tool? to the European Parliament.

The committee stage in the EP is soon closing for the new regulation. The Committee on the Internal Market and Consumer Protection (IMCO) is scheduled to vote on 29 February 2012 (agenda item No 21).