HAU and the opening of ethnographic theory

from Savage Minds: Notes and Queries in Anthropology ? A Group Blog by Rex
Ok, a little less politics on this blog and a little more anthropology. Hopefully some of you have looked at the introduction to HAU and want to start talking about it. The title of the piece is ?the return of ethnographic theory? but I?ve titled my post the ?opening of ethnographic theory?, and for good reason.
A quick look at the bios of the contributors and editors to HAU will reveal that it is in many ways a Chicago-Oxbridge production, but with a continental twist. In many ways, HAU represents what people at some of the most prestigious institutions of anthropology have been thinking for some time, but the journal ?opens up? that thought to the public by making their work open access. The result is something unique: a journal with a strong, almost parochial character which is also transparent to a fault.

Toward a Neuroanthropology of Immersive Online Gaming and Cyberdependence by Jeffrey G. Snodgrass

from Somatosphere by Jeff Snodgrass 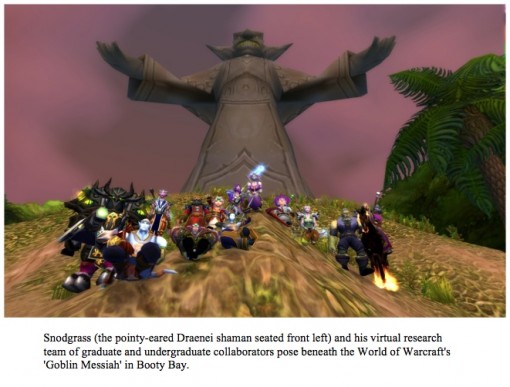 Since Spring 2008, I?ve been studying videogaming, conducting participant-observation research in and around the World of Warcraft (WoW), interviewing and surveying the citizens of this online community. I have been particularly fascinated by players? relationships to their WoW ?avatars,? the in-game graphical representations of their characters. Via avatars, gamers can temporarily separate or even ?dissociate? from their actual-world persons and enter WoW?s fantasy-scape.

HAU and the future of anthropological communication, part I

from Savage Minds: Notes and Queries in Anthropology ? A Group Blog by Rex
There?s been a ton of discussion in blogs, twitter, and hallways about the AAA?s shameful opposition to the free dissemination of knowledge. It?s depressing, but ultimately I think time is on our side and things are trending up. How can I put this delicately? As generational change occurs institutions will increasingly be staffed by people who not only want to do the right thing for the discipline, but will be able to.

from media/anthropology by John Postill
Milan presentation notes, IULM University, 26 January 2012
Introduction
Many thanks to Alessandra Micalizzi for the kind invitation. First attempt for me at connecting practice theory with media and social change.
The story behind both ? until now separate ? interests: EASA Media Anthropology Network, first media and practice theory (Bräuchler and Postill 2010), more recently media and social change ? Paris meeting 2012 to be co-convened with Tenhunen and Ardevol. See both websites.

The unexpected micro-politics of fieldwork

from Savage Minds: Notes and Queries in Anthropology ? A Group Blog by Ryan
A few years ago my wife Veronica (who is also a cultural anthropology graduate student) was doing her M.A. fieldwork in Yucatan, Mexico.  I was there with her.  We were staying in a decent sized pueblo, about three thousand people (although it seemed like much less for some reason).  We rented a room from a family for the summer?we found out later that two of the kids in the household were actually moved out of that room to make space for the two visiting anthropologists, but that?s another story of micro-politics for another time.  Lets just say that these two kids weren?t all that happy with the arrangement, and they made it pretty clear.  If only we had known!  Anyway, we worked out a deal.

do anthropologists dream of electronic savages?

from xirdalium by zephyrin_xirdal

Anthropology of this Century online

from ICCI Home
The new online journal Anthropology of this Century edited by Charles Stafford. “publishes reviews of recent works in anthropology and related disciplines, as well as occasional feature articles.” While not uniquely focused on cognition-and-culture themes, is quite open to them. In the just published 3rd issue, for instance:

from Anthropology Report by Jason Antrosio
On 16 January 2012, when the U.S. commemorates Martin Luther King, Jr. Day, Republican presidential candidates fanned flames of racial divisiveness. As Charles M. Blow put it in the New York Times: ?That?s the way I like to spend my Martin Luther King, Jr. Day: watching Newt Gingrich sneer at Juan Williams, a black man, for having the temerity to ask him if his condescending remarks about the work ethic of poor black people are indeed condescending? (Newt Gingrich and the Art of Racial Politics).

from Anthropology Report by Jason Antrosio
The previous post called for more commentary from anthropology on issues of race and Martin Luther King, Jr.. One reason such commentaries do not occur as much as they should is that the internet and blogging world is not a neutral venue?it has been shaped, structured and is policed by a mostly-male-mostly-white cohort.Witness Wikipedia: ?Surveys suggest that less than 15 percent of its hundreds of thousands of contributors are women.?