President Obama?s State of the Union Address earlier this week provided the Global Language Monitor the opportunity to analyze the changing Obama Narrative since he rose to the national prominence some five years ago. GLM found three distinct narratives with the communication styles supporting each narrative forming arcs of their own, characterized by their specific word choices, styles of delivery, rhetoric, and diction.

from FP Passport by Kedar Pavgi 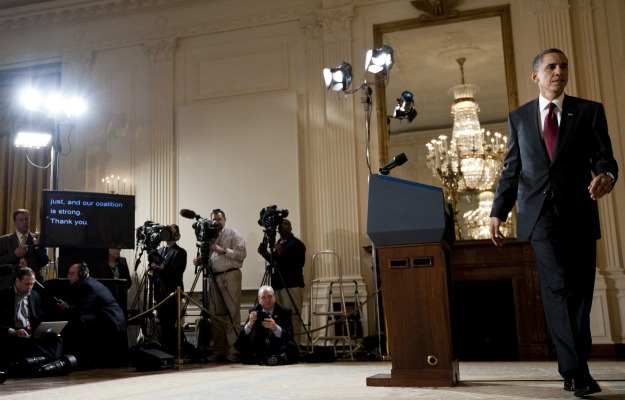 What foreign policy-related words are you most likely to hear during tonight’s State of the Union address?

Mashable: The State of the Union, Live From the White House

NBC Politics: State of the Union 2012

Online reaction to Obama’s State of the Union

from AL JAZEERA ENGLISH (IN DEPTH)
In his last first-term State of the Union, Obama focused on the struggling economy and his role as commander in chief.

State of the Union: Will the US be saved by its military?

from AL JAZEERA ENGLISH (IN DEPTH)
Obama’s praise for the American military complex is misleading and potentially dangerous, writes the author.

Why media outlets team up in an election year

What Businesses Can Learn From U.S. Politicians On Facebook

A new study from iContactreveals that Facebook is not only the most favored social network among the Republican presidential candidates, but that businesses can learn a thing or two from the campaigns with respect to engagement, fan growth and branding.

Obama vs. Romney: Who will blue-collar Americans hate less?

from washingtonpost.com – Op-Ed Columns by Harold Meyerson
If Mitt Romney becomes the Republican nominee and ­faces off against Barack Obama in November, we may finally be able to answer a question that has vexed students of American politics since the heyday of George Wallace: Which elite do white, blue-collar Americans hate more?

What Can Twitter Tell Us About the South Carolina Primary?

from AL JAZEERA ENGLISH (IN DEPTH)
Explaining logistics of major quadrennial vote, from party primaries to conventions and electoral college.

Obama?s State of the Union: Where Was the Tech?

from Boing Boing by Antinous / Moderator

In the interest of not having every thread on every subject turn into a hissfest about whether Obama or Romney/Santorum/etc. is a bigger doody-head, Boing Boing’s election year rules are back on. These rules will remain in force for the rest of 2012.