Over Turkey Protests, France to Vote on Genocide Denial Bill

by By STEVEN ERLANGER and SOPHIE COHEN
Although the draft law does not mention the mass killings of Armenians by Ottoman Turks in 1915, Turkey has objected to the bill.

Turkish Prime Minister Recep Tayyip Erdoğan has vowed never to visit France again if a proposed bill that would criminalize the rejection of Armenian genocide claims passes in the country’s Senate today.

France-Turkey defense ties could be strained 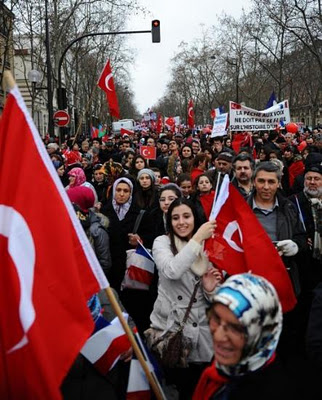 French senators are about to vote a bill to make it illegal to deny the tragic events of 1915 was genocide. If the French bill passes, those found guilty of denying the “Armenian genocide” would be sentenced to one year in jail and fined 45,000 euros.

World?s a stage for Turkey

by Acturca
The Weekend Australian, Sat, 21 January 2012, p. 22 Greg Sheridan, Foreign editor Ankara?s outward-looking Foreign Minister is upbeat about the Arab Spring Ahmet Davutoglu ? slim, dapper, courtly ? is the architect of what some describe, and it?s an overblown description, as Turkey?s neo-Ottoman foreign policy. Davutoglu, a former academic and author of a

Is Turkey?s economic miracle about to fade away?

by Acturca
The Independent on Sunday (UK) Sunday, 22 January 22, 2012, p. 40 Patrick Cockburn While its neighbours stumble, the country that is a role model for Islamic democracy could become a victim of overconfidence. Are the Turks seeing the Ottoman Empire reborn or are they going to be the next victims of economic chaos in

Özertem: Energy Diplomacy has a Critical Stance in Turkey-Russia Relations