This wednesday, Wikipedia, Reddit, and a range of other high profile on-line sites will go black in protest of SOPA and PIPA, legislation currently being considered by the U.S. Congress, which will impose regulations on net practices in the name of exerting greater control over “piracy.” For those of us who have been involved in the digital world for a long time, this protest recalls another key moment in the history of the web when key sites went black in 1996 in protest of the Communications Decency Act, which would have similarly regulated the content and practices of the online world, in this case in the name of “protecting children” from obscenity. We should be cautious about the deployment of morally fraught terms like “piracy” and “decency” in framing public policies, since the stakes in these regulatory struggles are always more complex than such black and white language might indicate. Both are often deployed in ways that place the participatory ethos and free expression of the web at risk.

Protest SOPA: Black Out Your Website the Google-Friendly Way

Google has some advice for anyone who would like to black out their site to protest the SOPA/PIPA/OPEN legislation, while ensuring that doing so doesn?t harm their Google search rank or indexed content.

Wikipedia went dark, Google blotted out its logo and other popular websites planned protests on Wednesday to voice concern over legislation in the US Congress intended to crack down on online piracy. 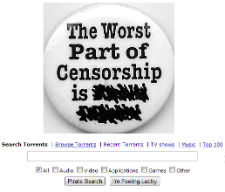 The Pirate Bay is no stranger to being censored. Finland, Denmark and Italy are just a few of the many countries where ISPs have been ordered to make the website inaccessible to their users.

But on the horizon looms threats of a different kind, the PIPA and SOPA bills.

Join EFF and websites across the world in protesting the dangerous censorship legislation currently pending in Congress.

On January 18th, EFF will join websites across the world in standing up against the proposed blacklist bills(SOPA in the House and the PROTECT IP Act in the Senate).  EFF is calling on websites to be part of the protest by blacking out their logos, posting statements opposing the bills, and linking to our action center.  Websites are also encouraged to follow the powerful examples of Reddit, Wikipedia and others by ?blacking out? their entire site for a day. If you do choose to take down your website in protest, please be sure to post a message about why you oppose the blacklist bills and consider linking to the EFF action center so site visitors can take the next step and contact Congress.

At Global Voices, we understand that we, collectively, are the Internet. Our individual participation is what makes the Internet a global conversation of startling depth and variety, but this is possible only because of its open technical and legal structure. Unfortunately, there are powerful corporate and government forces who would prefer to see the openness and accessibility of the web restricted. They seek to deploy censorship and surveillance in the name of enforcing copyright, employing the very tools used to censor the Internet in authoritarian countries, such as China, Iran, and Syria.

Today, January 18, is an important day for the Internet. Corporate websites, from Google to Twitpic, along with civil society groups and individuals, have all joined together in a common cause: to protest two American bills that could have grave effects for global online free expression.

This Is the Internet After SOPA [PICS] 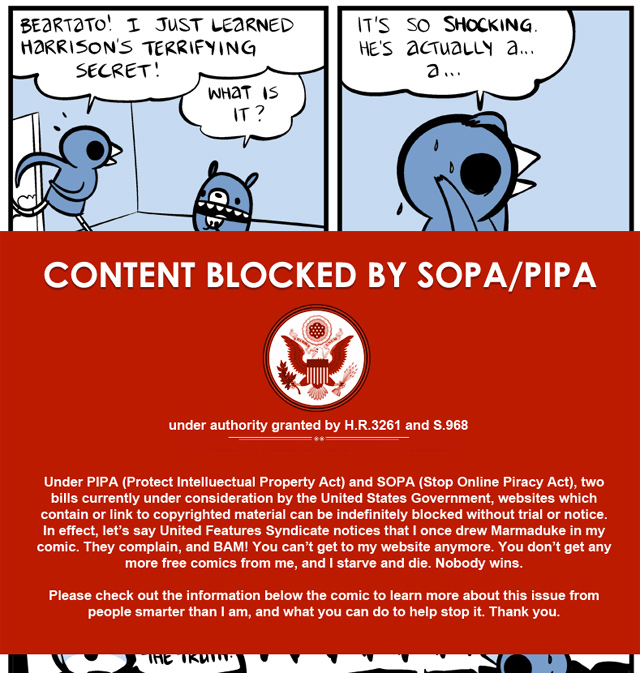 Where Do SOPA and PIPA Stand Now?

Why SOPA Is Dangerous

SOPA Will Take Us Back to the Dark Ages

I had an epiphany today. The Stop Online Piracy Act, orSOPA, was not written by people who fundamentally misunderstand how the web works. They understand all too well, and want to change it forever.

from Wired Top Stories by David Kravets
Hundreds, if not thousands of websites are expected to go dark or alter themselves Wednesday to protest proposed U.S. anti-piracy legislation that many believe goes too far fighting online copyright and trademark infringement. But what’s all the fuss about? Here’s an explainer of the basics of the bills, the protests and how you make your voice heard. 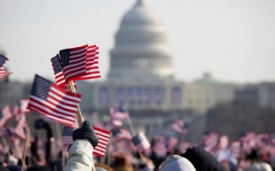 President Obama?s administration has issued a public response to petitions protesting the Stop Online Piracy Act (SOPA).
?While we believe that online piracy by foreign websites is a serious problem that requires a serious legislative response,? said the note, ?we will not support legislation that reduces freedom of expression, increases cybersecurity risk, or undermines the dynamic, innovative global Internet.?
SOPA, opponents agree, does exactly that ? it reeks of censorship, throws unreasonable demands at many online businesses and poses significant technological problems.

from apophenia by zephoria
Much to my happiness, the internets are in a frenzy about the ?Stop Online Piracy Act? (aka SOPA). Congress is currently in recess, but the House announced a hearing on the potential impact to the Domain Name Service on January 18 and everyone expects the Senate to begin discussing a similar bill ?PROTECT IP Act? when they return to DC on January 24. There?s a lot to these bills ? and the surrounding furor ? and I?m not going to go into it, but I recommend reading the actual bill and Open Congress info, the Wikipedia article, EFF?s blog, and the various links at Stop American Censorship. Tomorrow ? January 18th ? a bunch of geeks are planning a SOPA Blackout Day to voice their discontent.

What is Wrong with SOPA?

At TorrentFreak we?ve been covering copyright battles for more than half a decade. When a new anti-piracy bill emerges, wherever in the world, there has always been a push-back from civil rights groups and Internet users. Unfortunately, these protests are almost exclusively ignored by lawmakers.
Could this pattern be broken today?

What is SOPA & SIPA trying to do…