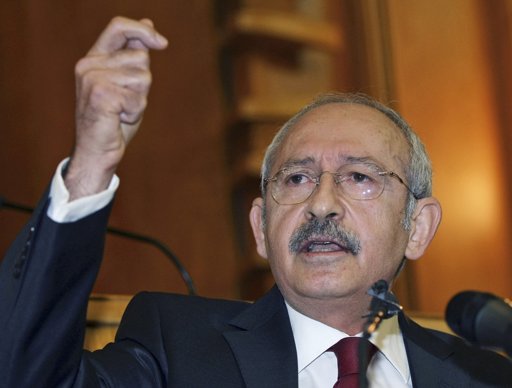 Turkey’s main opposition Republican People’s Party leader Kemal Kilicdaroglu addresses party members at the Parliament in Ankara, Turkey, Tuesday, Jan. 10, 2012. Kilicdaroglu accused the judiciary of doing the government’s bidding after a prosecutor sought to lift his legal immunity, a step that would clear the way for him to be charged with insulting the judiciary over coup plot trials. Kilicdaroglu said Tuesday that the prosecution of hundreds of alleged coup plotters has been turned into a “blood feud” in which judges are acting at the behest of the government against its political opponents rather than prosecuting real crimes.(AP Photo)

WHEN Recep Tayyip Erdoğan’s Justice and Development (AK) party took office in Turkey in 2002, many feared that it had an Islamic agenda for the country. But today a bigger fear is over what many see as a creeping authoritarianism. Mr Erdoğan has justly asserted civilian rule over an army that had toppled four of his predecessors since 1960. But some believe the government has used the fear of coups to justify harassment of legitimate opposition, including the persecution of journalists. The long-running “Ergenekon” investigation into an alleged coup plot has netted hundreds of arrests but not a single conviction.

Council of Europe is against courts with special powers

from NYT > Turkey by By SUSANNE GÜSTEN
The Turkish government is struggling to address the flood of appeals cases and a big shortage of judges.

Behind Bars in the Deep State – by Justin Vela
Foreign Policy (blog)
5, one of the country’s most high-profile detainees, investigative journalist Ahmet Sik, testified in court for the first time to defend himself against charges of propagandizing for a shadowy pro-military conspiracy called Ergenekon, which allegedly

22 people were taken into police custody in Diyarbakır in the course of the latest KCK operations, among them the Deputy Mayor of Bağlar. Eleven persons were arrested in Istanbul few days earlier.

Kurds ask for rights amid 40 detentions

from Hurriyet Daily News
More than 40 people were detained as part of the ongoing Kurdish Communities Union (KCK) operations yesterday in Istanbul and southeastern Turkey.

from Kamil Pasha by Jenny White
Excerpts from a Foreign Policy article by Justin Vela. Click here for the full article.
?In the past two years, thousands of citizens who have voiced criticism of the government have been detained, usually led away by police in predawn raids on their homes. On Jan. 5, one of the country?s most high-profile detainees, investigative journalist Ahmet Sik, testified in court for the first time to defend himself against charges of propagandizing for a shadowy pro-military conspiracy called Ergenekon, which allegedly plotted to overthrow the government of Prime Minister Recep Tayyip Erdogan.

from Kamil Pasha by Jenny White
On December 29, 2011, warplanes struck and killed thirty-five Turkish, many of them high school students and all of them civilians. The attack was based on drone-generated intelligence showing a group of people advancing along Turkey?s southeastern border with Iraq. The young men were smuggling products across the border. (click here for full text of an essay by Ayça Çubukçu; excerpt below.)

Erdoğan tells Zana to ?head to the mountain?

Kurds should not lay down arms, Zana says

Kurds should not lay down their arms because weapons are the community?s…

Erdogan, justice and the rule of law – FT.com

Since coming to power in 2002 Turkey?s prime minister, Recep Tayyip Erdogan, has led his country some way down the road to becoming a more open and liberal democracy. But a report on Turkey?s judicial system published by the Council of Europe this week highlights the increasingly halting nature of this advance.

A Game of Turkey

So it really was a case of man-bites-dog to watch Ilker Basbug, a former chief of the army’s general staff, be hauled before a court and bundled off to jail last week on charges that he belongs to Ergenekon, an ultranationalist, terrorist organization

from Hurriyet Daily News
Ankara is hit by a new political earthquake, as a prosecutor looks to try the CHP?s leader for ?influencing a fair trial?

BDP leader to be taken to court

from Hurriyet Daily News
The Turkish General Staff has filed a legal complaint against Peace and Democracy Party ?

from Hurriyet Daily News
Opposition figures from the Republican People?s Party and Nationalist Movement Party react against former chief of Gen. Staff Başbuğ to be tried in civilian court and say he should be tried in Supreme Council

Something not right in Başbuğ?s detention

from Hurriyet Daily News
No one is above the law. Neither is there any law ? natural or otherwise ? that says people who have served in high office are …

He was a democrat commander, now charged with being a terrorist

from Hurriyet Daily News
When you review İlker Başbuğ?s term as top commander, you can easily conclude that he was an unfortunate chief of General Staff …

A slippery slope ahead for Turkey

from Hurriyet Daily News
Turkey might find itself falling down a slippery slope in 2012 as it contends with problems at both home and abroad.

Entering a third term in office can be one of the most risky and challenging periods for a government. The experiences of Tony Blair and Margaret Thatcher are obvious examples of this. While a party leader is busy implementing their policy in accordance with their next goal, party members are wondering who will be next to take up the leadership at the end of the third term.

The Tangled Web of Başbuğ Arrest

In a disturbing article, Gareth Jenkins parses what exactly General Başbuğ is accused of and on what evidence. Click here for the full article. Here is a brief excerpt from the introduction: