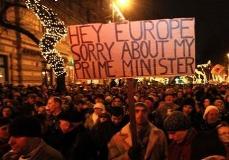 from euro|topics
Tens of thousands of people demonstrated in Budapest on Monday evening against Hungary’s right-wing conservative government and the controversial new constitution. That will hardly impress Prime Minister Viktor Orbán, commentators write, and call on the EU to step up pressure on the country.

from Bloggingportal.eu – Today’s posts
Investors slammed Hungarian assets again on concerns that the government’s unorthodox policies will derail progress toward a financial agreement with the IMF, but the country isn’t yet facing funding pressure, analysts said.

from euro|topics
The EU Commission is unwilling to begin talks with Hungary about financial aid, mainly because of the country’s new central bank law. Hungary is at serious risk owing to credit shortages and its confused economic policy, some commentators write, while others criticise the EU for punishing debt sinners but not the dismantling of democracy.

Tones of anger against German chancellor Angela Merkel’s lack of action over the eurocrisis and a ‘Germanophied’ Europe, are getting louder and more intense

from open Democracy News Analysis – by Borys TarasyukNegotiations over the Ukraine’s EU Association Agreement were finalised last month, but Yulia Tymoshenko’s continued imprisonment prevented the EU from signing off on a deal. Borys Tarasyuk wonders whether the Europeans may have overestimated their leverage in the matter, and whether their approach will turn out to be counterproductive.

from Ideas on Europe by Ronny Patz
As you may remember, the last European Council meeting on 8 & 9 December 2011 ended with the conclusionthat no unanimity for a Treaty change was achieved. Thus, an intergovernmental treaty was needed to move ahead to continue the anti-crisis measures. 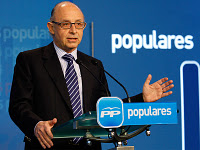 Spain’s new centre-right government took office on 22 December, just in time to dump a veritable lump of coal into the Christmas stockings of people across Spain: a package of spending cuts and tax hikes worth around ?16 billion for 2012. To be fair to Spanish Prime Minister Mariano Rajoy’s cabinet, some of the measures adopted are quite bold.

The conundrum of Spanish unemployment

from Project Syndicate by Jim Leitner, Nuno Monteiro, Ian Shapiro
ECON WEEKLY: Restoring European Growth Since the eurozone debt crisis crisis erupted in Greece almost two years ago, EU leaders have failed to propose a solution that balances austerity and economic growth, without which confidence in the euro cannot be restored. Perhaps European policymakers should look to Argentina for the answer.

FELDSTEIN: The French Don?t Get It

from Project Syndicate by Martin Feldstein
FELDSTEIN: The French Don?t Get It The French government doesn?t seem to understand the real implications of the euro, which it shares with 16 other EU countries. French officials have now reacted to the prospect of a credit rating downgrade by lashing out at Britain, which is not in France’s position precisely because it retains its own currency.

from BBC News | Europe | World Edition
European leaders, including German Chancellor Angela Merkel, warn of more hardship and sacrifices in 2012 as the eurozone wrestles with a debt crisis.

from euro|topics
Denmark took over the six-month presidency of the Council of the European Union from Poland on January 1. Danish Prime Minister Helle Thorning-Schmidt has declared that rescuing the euro will be her main task. While some commentators see the goal as overambitious for the non-euro country, others see Denmark as a constructive member of the EU that can prevent it from falling apart.

by Grahnlaw
What does the Commission’s Europe 2020 web page Annual Growth Surveys have in common with Economic and Financial Affairs (Ecfin) page EU economic governance and president José Manuel Barroso’s own res gestae on New action for growth, governance and stability?

Denmark and the EU Council: The blabla Presidency has started

from Ideas on Europe by Ronny Patz
What restores confidence and faith in the EU? What motivates citizens to become involved, to care, to listen to what EU politics can bring to them? The Danish Presidency has given its first answer:
By making lame PR videos with soft colours, soft background music and a lot of soft blabla.

from open Democracy News Analysis – by Fabrizio Tassinari
Is an EU based on accommodating differences and allowing exemptions suited to bring Europe out of the crisis? A good answer may come from Denmark.

from open Democracy News Analysis – by Krzysztof Bobinski
The still uncertain outcome of the eurozone crisis makes predictions for 2012 difficult. But its singular impact in the European Union’s newer member-states could include a revived appreciation of the benefits of federalism, says Krzysztof Bobinski.

from Ideas on Europe by Protesilaos Stavrou
Credit Rating Agencies have a central role in the crisis of the Euro. Their downgrades are much feared by European policy-makers who are trying to cope with the mounting pressures on their single currency and its constituent member-states. Over the years of the crisis these downgrades are considered among the primary sources of the negative dynamics against sovereigns who were experiencing serious debt crises. Greece was the first to experience a series of consequent credit downgrades, eventually becoming unable to raise money from the international bond markets, thus coming to the need of a bailout mechanism, to prevent an official bankruptcy. Ireland and Portugal had a similar fate. Currently bigger Euro member-states, such as Italy and France (and not only) are also threatened by such downgrades. The approach much of the European leadership and the intelligentsia has held vis a vis Credit Rating Agencies, is that their actions are either suspicious or biased, certainly not reflecting the truth of what actually is the case in the European interior. Before commenting on the ?official? position I need to present a few facts about these credit Rating Agencies, their role and the way they were treated prior to the crash of 2008 by almost all governments and institutions.

from Eurozine articles by Ulrich Beck, Ulrich Bielefeld, Nikola Tietze
While discrepancies between EU member states can be overlooked during win-win periods of growth, recession triggers xenophobic and anti-European reactions in both rich and poor countries. In interview, Ulrich Beck explains how inequality leaves the Union susceptible to decay. Building on the sense of a common European destiny engendered by the crisis, how can Europe be communicated as an opportunity for more power rather than a threat to national sovereignty?

from Project Syndicate by Hans-Werner Sinn
TA: Two Models for Europe The eurozone’s sovereign-debt crisis is eating its way from the periphery to the core, and the exodus of capital is accelerating. If the eurozone does not want to embrace capital controls, it has only two alternatives: stop the local printing of money, or provide investment guarantees in countries that markets view as insecure.

from Project Syndicate by Joschka Fischer
FISCHER: Europe?s Market-Led Integration Just as former Italian Prime Minister Silvio Berlusconi was brought down not by political opponents, but by jittery investors, it is the markets, not European leaders, that have opened the door to a European fiscal and political union. That is no cause for celebration.

from Global Voices Online by Tibor Blazko
One of the most important Slovak events in 2011 was the protest of over 2,000 medical doctors employed by state hospitals; 1,200 of them (from the total of 6,500) temporarily cancelled their job contracts later.
It was not the first such protest. Medical doctors had already been protesting in 2006, demanding a 25% wage raise and cancellation of the transformation of hospitals to (state-owned) stock companies. In 2009, too, doctors were not satisfied with their wages. But the head of their trade union declared that in the time of crisis they wanted to be with the rest of the society. At the time of the emerging euro-crisis of 2011 this solidarity was no longer there. That’s why some people labeled their protest as political, even also the former PM asked them to not desert their patients.