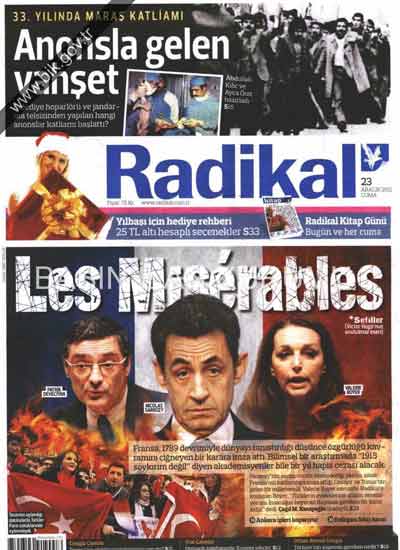 Turkey: The land of ‘zero problems’ has an awful lot of problems 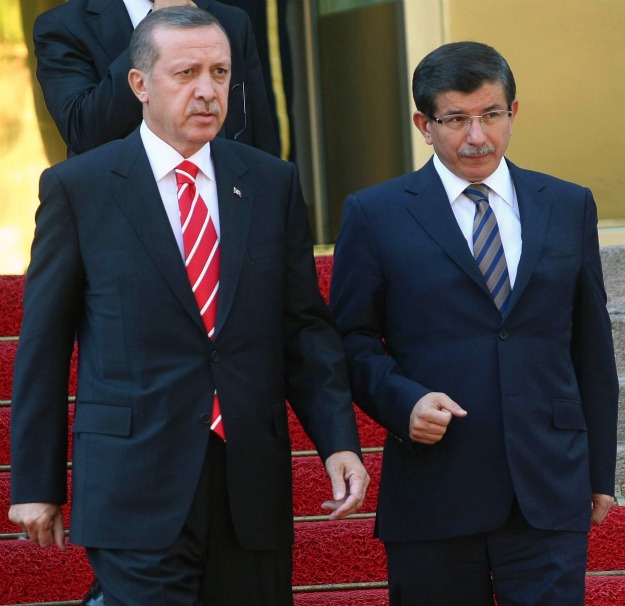 Turkey, today, took the dramatic step of cutting off diplomatic ties with France over a new law passed by the French government that would criminalize genocide denial, including the 1915 slaughter of Armenians by Ottoman Turks. Yigal Schliefer writes, “Add France to the countries that Turkey now has strained relations with.”

The French National Assembly passed a law on Thursday that makes denying the Turkish genocide of Armenians in the early 20th century a criminal offence. Ankara promptly recalled its ambassador to Paris. Turkey is overreacting, some commentators write, while others criticise the law as electoral tactics on the part of the ruling conservatives.

Turkey Lashes Out at France Over a Bill About Armenian Genocide

by By SEBNEM ARSU
Turkey recalled its ambassador for consultations and halted military dealings after France advanced legislation criminalizing the denial of the Armenian genocide. 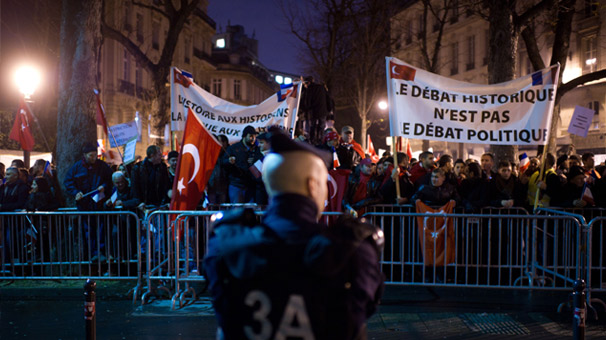 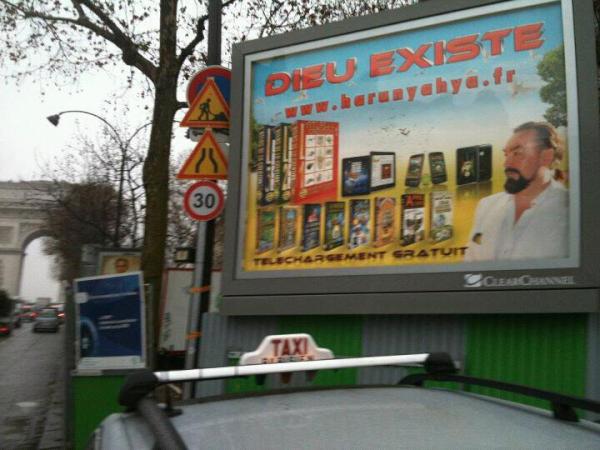 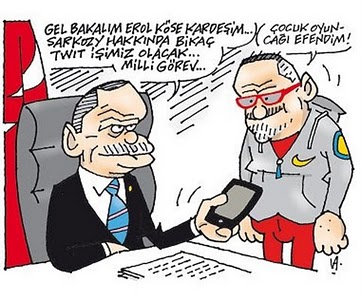 by Fréderike Geerdink
ISTANBUL ? In Turkey it is feared that the bill passed today in France making it illegal to deny the Armenian genocide of 1915 will damage the level of debate on the topic in Turkey. The debate had been slowly making progress over the last couple of years. Calling the Armenian genocide ?genocide? no longer

Turkey freezes all political relations with France over genocide row

from World news: Turkey | guardian.co.uk by Angelique Chrisafis, Nick Hopkins
Recep Tayyip Erdogan recalls ambassador after Paris’s decision to prosecute people who deny killing of Armenians was genocide
Turkey has frozen relations with France, recalling its ambassador and suspending all economic, political and military meetings in response to French MPs’ approval of a law that would make it a crime to deny that the mass killing of Armenians in 1915 by Ottoman Turks was genocide.

from Yahoo news
Turkey froze all political and military relations with France after the French parliament?s lower chamber approved a measure that makes it a crime to deny genocide against Armenians a century ago.

The Turks are selling pasta to the Italians, educating Papua-New Guineans in their universities, building airports in Egypt, running schools in Nigeria and establishing diplomatic missions in Latin America. Turkey has not felt and acted like the confident global player it is today since the heyday of the Ottoman Empire in the sixteenth century.

from Hurriyet Daily News
France put at risk its ties with Turkey, a key NATO ally and one of Europe’s fastest growing economies, on Thursday, when lawmakers debated a bill to ban the denial of the Armenian claims regarding the events of 1915.

Valérie Boyer Gets Her Way 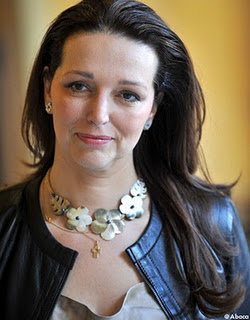 Valérie Boyer Gets Her Way…Now she can tell how she feels about the massacres of Turks in the Balkans, Greece and Caucasus.. Turks should press for the recognition of their sufferings instead of denying Armenian Atrocities in France under this silly law in the making.

Turkey’s Duty That Arise from the French “Genocide Legislation”

from Bianet :: English
In order to develop the necessary juridical and ethical norms in Turkey, it is imperative to accept the notion that the brutality imposed upon Armenians by those who held political power in the Ottoman state in 1915 cannot be legitimized, rationalized, defended nor downplayed. 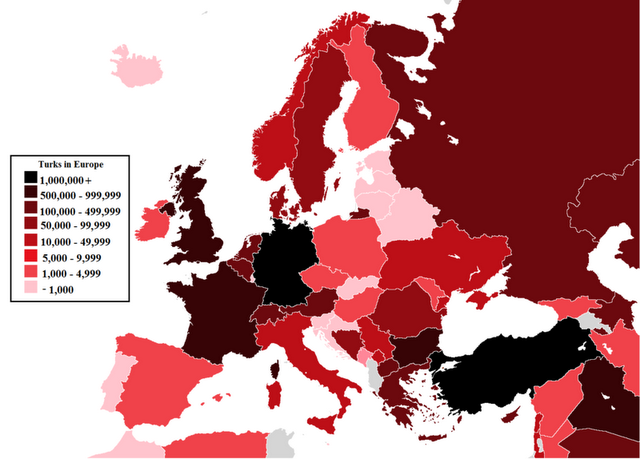 Learning lessons from the French bill

from Today’s Zaman, your gateway to Turkish daily news :: Turkish Pre
Turkey has been directing harsh criticisms and issuing warnings to France over a bill that proposes to make it a crime to deny that the Ottomans? mass killing of Armenians in 1915 was genocide. The criticisms mostly center on the bill blocking individuals? freedom of expression and France using Armenians as an instrument for politics. The French parliament is expected to vote on the bill on Thursday, which will see an end to the debates of whether the bill will be passed or not, but could spark new debates if the bill is passed.

from Today’s Zaman, your gateway to Turkish daily news :: Columnists by NICOLE POPE
The latest spat between France and Turkey is hard to avoid these days, and I have a strong sense of déjà vu, having covered a number of such incidents in the past when I worked as a Le Monde correspondent. They bring out the worst of both countries.

from Hurriyet Daily News
Turkey has recalled its ambassador from Paris in protest at a decision by the French parliament to back a law banning denial of the Armenian claims, a spokesman for the embassy said Thursday.

from Hurriyet Daily News
France is a great country that has been having diplomatic relations with Turkey for centuries. Cultural interactions between Turks and French have been immense…

Why are we angry?

from Hurriyet Daily News
Let?s not get angry at this bill the French Parliament has passed. If there is one person to be ashamed, it is French President Nicolas Sarkozy…

from Hurriyet Daily News
As I sit and write this article, the French vote on a bill to criminalize genocide denial is still half a day away. All the same, the result of the vote…

from Today’s Zaman, your gateway to Turkish daily news :: Interviews by ORHAN KEMAL CENGİZ
When the French were discussing passage of a law in 2006 to criminalize denial of the Armenian genocide, Hrant Dink was being tried under Article 301 of the Turkish Penal Code, which criminalized claiming Turkey had committed genocide in 1915.

A challenge for France: To abandon or not to abandon core values?by Ahmet Davutoğlu

from Today’s Zaman, your gateway to Turkish daily news :: Interviews by Ahmet Davutoğlu
We have left behind the first decade of a new century. We are still discussing the paradigm shift taking place at the global level in the aftermath of 1989 and 2001, while taking stock of the past two decades.